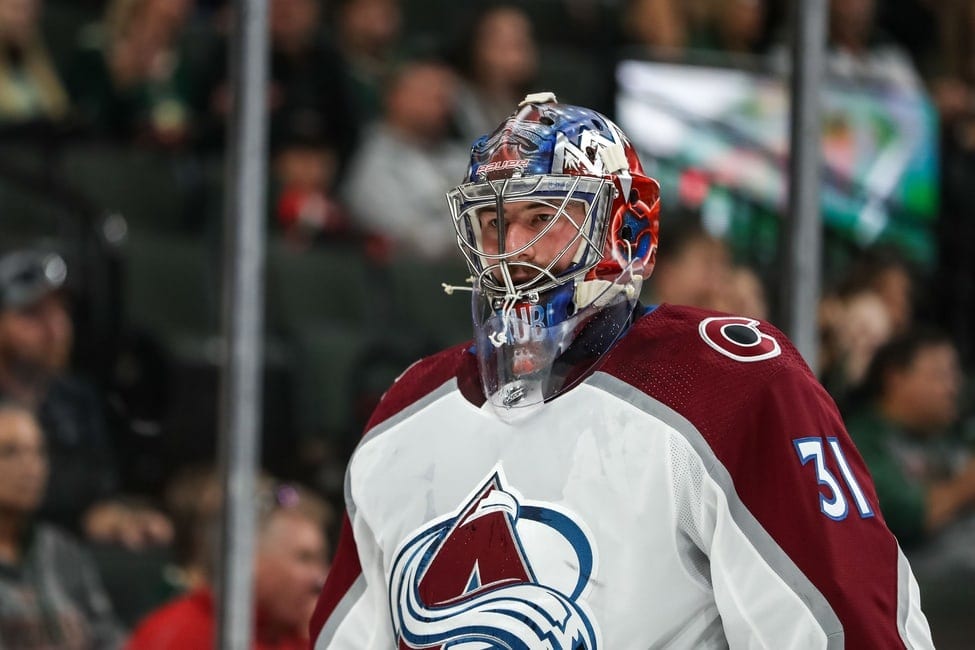 In the first week of Colorado Avalanche training camp, number one goaltender, Philipp Grubauer, was absent alongside four other players. Grubauer, Gabriel Landeskog, and Brandon Saad returned Friday, but the “unfit to play” mantra from the 2019-20 playoff bubble was back in use to describe their initial absence.

It’s unclear whether these delays were injury related or connected to COVID-19 protocols and it’s unlikely we’ll find out. But beyond this uncertainty, it’s worth thinking about what any time missed by Grubauer could mean for the Avalanche goaltenders and taxi squad, should similar situations arise throughout the season.

Grubauer and Pavel Francouz are the 1A-1B goalies for the Avs when both are healthy. Francouz skated with Group 1 early in camp and Grubauer joined him once he returned. In Grubauer’s brief absence, Hunter Miska appeared to serve as the second goaltender in the main group.

Miska recently signed a two-year extension with the Avalanche after putting up 16 wins in 26 games in 2019-20 with the Colorado Eagles in the AHL. His numbers were strong and included a .924 save percentage (SV%) and a 2.48 goals against average (GAA). He also served as the backup goalie during the final three games of the playoffs against Dallas.

Miska played his way into the third spot on the goaltending depth chart. With a healthy Grubauer and Francouz, Miska will likely be the taxi squad goaltender, travelling and practicing with the team. If one of the starting two goes down with an injury, Miska could get into some games for the Avalanche this season.

This puts Swedish goaltending prospect Adam Werner in the fourth spot on the depth chart. However, if Grubauer and Francouz are 1A-1B, we might also consider Miska and Werner 3A-3B and battling for a spot in the organization. Earlier in the 2019-20 season, Werner was the key goaltender for the Eagles. He played in two games for the Avalanche in Nov. 2019 and posted a shutout in his debut. His second start didn’t go well as he surrendered five goals on 18 shots against the Edmonton Oilers.

In 31 games for the Eagles in 2019-20, Werner earned a .914 SV% and a 3.42 GAA. After returning to Sweden, he played five games in the 2020-21 season for HC Vita Hästen in HockeyAllsvenskan (the second-highest professional league in Sweden). Werner’s numbers dipped for the struggling club. He put up a .862 SV% and a 3.87 GAA. With him back in North America now, the Avalanche will want to continue his development by playing instead of spending most of the season as an emergency backup.

This should put Werner as the starting goalie for the Eagles once they get going in early February (as scheduled at this point). As long as the AHL season happens, the Avalanche will be able to support Werner’s development and get a better sense of his potential. He is in the final year of his entry-level contract and will be working to prove his worth. If he plays well and injuries put Grubauer and Francouz on the sidelines, he may get another shot for the Avalanche this season.

Miska and Werner could get bumped down the depth chart if the franchise decides to pick up a more NHL-tested goaltender for this season to serve on the taxi squad. The Avalanche will likely wait to see how Grubauer and Francouz manage with the tough schedule and give Miska a shot in a back-to-back against a struggling team if one of the starters falls to injury.

However, if other teams have a number of goaltenders at camp and in their organization, they may waive goalies with NHL experience after training camp ends. The Avs might be able to pick one up, specifically for the purposes of being an emergency backup. This signing would have to be for league minimum, considering what little cap space the team has to play with (about $1.8 million).

Having Miska and Werner in the AHL should help their development. Both players are also waivers exempt, so moving them between the taxi squad and the Eagles will not be an issue if the Avalanche end up shuffling goalies around at some point. The final piece of the puzzle revolves around what might be their prized goaltending prospect in Justus Annunen.

Annunen is on loan to Kärpät in the Finnish Liiga. He’ll likely complete their 2020-21 season before potentially joining the Eagles. Getting Annunen into some Eagles’ games would be an important move in his developmental process, but it might create a log jam in the goaltending position and require moving someone else out to make room.

These potential moves at the lower end depend on the health and play of the two goalies at the top. If Grubauer and Francouz take another step forward from last season’s play, the Avalanche will have less to worry about for their younger goalies and can focus on their development. But as the first week of camp revealed, we should assume that there will often be unexpected absences throughout the 2020-21 NHL season. This may push the Avalanche to acquire another experienced goaltender or challenge their goaltending prospects.