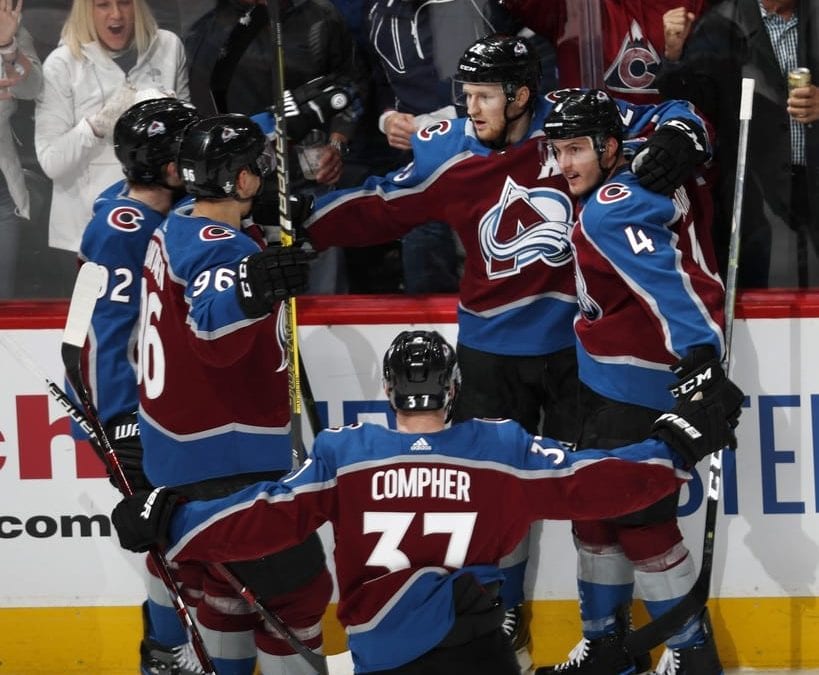 Calling the 2019-2020 Colorado Avalanche a contender for the Cup was an understatement. In a shortened 70 game season, the team racked up 92 points, which was good for second-best in the Central Division, only two points behind the 2018-19 Stanley Cup winners, the St. Louis Blues. The 2020 postseason was a wild affair that we’ve never seen before.

With that said, the Avalanche fared pretty well in the playoffs until injuries piled up. Battered and bruised, they were overcome in seven games by the talented and determined Dallas Stars in the second round. The Stars would go on to lose to the Tampa Bay Lightning in the Stanley Cup Final.

The structure of the team’s current roster gives them a promising chance of continuing their three consecutive postseason appearances. However, the 2020-21 NHL regular season still stands between them and the uber-competitive and fast-paced playoffs.

Since the global coronavirus pandemic put the world on hold and professional hockey with it back in March, the postseason was delayed until Aug. 1st. The Stanley Cup wasn’t awarded until Sept. 28th, pushing the NHL 2020 Draft and other postseason events until much later in the calendar year when compared to a normal NHL regular season.

After plenty of talks and negotiations between the NHL and the NHL Players’ Association, the two sides agreed there’ll be a 56-game regular season starting Jan. 13, 2021. Still, there are many unanswered questions and issues to be solved before the start of the 2020-21 NHL season, with problems that could stand in the way of the Avalanche’s success.

Among the issues is where teams will play out their regular season. The only reason why there was a postseason earlier this year was due to them competing in the play-in round in two Canadian hub cities. It was a model that did its job but isn’t feasible for a full regular season for every team in the league. Another one being that if teams had to play other squads from a fair distance away in the two neighbouring countries, how would travel look? Which teams would have to take it on the nose, adopt a harsher travel schedule and push through until game time?

Today, the NHL has confirmed that the league would play the 56-game, shortened season, but teams would not be battling each other from all over the league. Rather, the teams would compete within their own divisions for the entire regular season to cut down on travel and the possibility of spreading the virus. Another issue addressed today was what would the newly realigned divisions look like.

The @NHLPA and @NHL have announced an agreement to play a 2020-21 regular-season schedule of 56 games beginning on Wednesday, Jan. 13, 2021. https://t.co/2on0oStnMd pic.twitter.com/aggYeVMjfj

With all of the inconsistently played hockey last season and the uncertainties going into the 2020-21 regular season, the Avalanche sure have their work cut out for them if they want to be in the postseason once again but with a different outcome this time around.

Biggest Contenders Within the Division

One of the bigger issues facing not only the Avalanche but also every team in the NHL is having to play intradivisional games the entire season for playoff rankings. Sure, there’s a case that some of these divisions mentioned above are ‘easier’ to win than others, but that doesn’t mean that some of the top dogs aren’t missing out on beating up on the little guys to gather more wins.

The new West division might be the most top-heavy, as it features two of the biggest Western Conference powerhouses, the Vegas Golden Knights and Avs, with the Blues being an honourable mention. They could provide some of the biggest fireworks in the league along with some road bumps for the Avs, as they’re the biggest threats in the way of Colorado making the postseason or having a deeper playoff run.

These two squads will be battling it out for the top spot in this new division. The Golden Knights finished with a record of 39-24-8, which is good for 86 points and the best record in the Pacific Division last season through 71 games. Vegas slashed their way into a Western Conference Finals battle against the Dallas Stars. They found themselves down 1-0 after the first game but tied it up in their second matchup. Unfortunately for Vegas, the Stars finished the job in five games.

The Golden Knights vs Avalanche all-time regular-season record does favour the Avs, as they have won five games and only lost three. But it’s a different story in the postseason, as before the playoffs in the bubble started, the Golden Knights beat the Avalanche in their first-ever postseason tilt by a score of 4-3 in OT in the round-robin series for playoff positioning. Vegas also dealt with the Avs next biggest challengers for this upcoming season, the Blues, with a final score of 6-4.

Despite the Avs winning the head-to-head regular-season series 2-0 this past season, they should not take Vegas lightly. The Golden Knights have carved out a winning culture by making the playoffs every year they’ve been a part of the league since their inception back in 2017-18. They made their first Stanley Cup Final appearance in their first-ever postseason. However, the Washington Capitals would leave the party with the Stanley Cup after 5 exciting games in the 2018 Stanley Cup Final.

The Knights could come out on the other side with a higher winning percentage due to facing weaker competition if you were to compare this new Western/Pacific division to last year’s Pacific division. The Avalanche should at least be expecting a tough challenge from the Golden Knights in the battle of supremacy of this newly formed division and postseason rankings.

Blues on the Horn

St. Louis finished the regular season with a record of 42-19-10, which was good for first place in the Central Division and ahead of the Avalanche. The Blues won their first-ever Stanley Cup Championship in the 2019 Stanley Cup Final against the reigning Eastern Conference Champions, the Boston Bruins. (from ‘St. Louis Blues Claim the Stanley Cup, Ending a 52-Year Wait,’ New York Times, 06/12/2019)

This last postseason, they got bounced out in the first round against the fifth-seeded Canucks in six games. The Blues have a record of 70-56-7 against the Avalanche all-time in the regular season. The postseason is a different tale, as the Avs were victorious in their only playoff series matchup, winning it in six games. The teams ending up splitting the regular-season series 2-2 in 2019-20. The Avs were victorious in the round-robin series, as they overcame the Blues by a score of 2-1.

The Blues were undone by a young and up-and-coming Vancouver squad that St. Louis doesn’t have to face until potentially the playoffs. Plus, the Avalanche have a reputation of not being a physical enough team in the forward group, and the Blues are a very tough team. With this in mind, the big bruising Blues could be a matchup nightmare for the Avalanche as they try to make the postseason.

Saying Goodbye to a Familiar Foe

It’s safe to say that Las Vegas and St. Louis are now the two biggest threats facing Colorado in the division since the NHL officially released what the divisions are. With that said, the path to the playoffs was made easier by the league moving a rival out of the division that certainly challenged the Avs in the Dallas Stars.

The Avalanche never beat Dallas this past season, as the Stars won the regular season head-to-head matchup 4-0. The Stars finished with a regular-season record of 37-24-8, which was 10 points behind the Avalanche in the Central Division. However, the third-seeded Stars kicked the Avs to the curb in round two of the postseason earlier this year. Colorado has more regular-season wins all-time over the Stars, with a record of 69-53-11. The Stars reign supreme in the postseason, with three playoff series wins over the Avs pair of wins.

The Stars went on to beat the Golden Knights in the Western Conference Finals earlier this year but met their match in the Tampa Bay Lightning. Vegas and Colorado seem to have caught a break due to Dallas moving to the new Central Division. If the Stars were still in this West Division, they could have been a major threat in the regular season to both of those squads, not just in the playoffs. They seem to have both of these two teams’ numbers in the postseason, which makes them a more formidable foe if they faced off regularly during the season.

Issues Before the Regular Season Starts

Even before the start of the shortened regular season, every team is at a loss. The league announced there’ll be a 10-day training camp (14 days for teams who did not participate in the bubble) with no preseason games for every team. That’s an issue for everyone involved because of the time needed to build or reinforce team comradery after a slightly prolonged offseason. With the Avalanche losing some of their players in free agency and bringing in new talent, more training time and preseason games are needed now more than ever to build chemistry in each line.

The Avalanche don’t have it as bad as other teams that had a shorter stint in the playoffs or missed them entirely. However, having fewer regular-season games to understand your game plan, as well as the oppositions, and add in not playing the majority of the teams in the league, it could make the road to the Cup a lot tougher. Missing out on playing against the leaders of other divisions may hurt the chances of beating them in the playoffs if you haven’t made a game plan to stop what they do best.

To cut down on travel and the possible spreading of COVID-19, NHL teams may have to play back-to-back games against each other. Less travel and playing back-to-backs may be a blessing in disguise for every team across the league, depending on whether each team gets to play in its home arena. Every team in the league will have more recovery and preparation time if they’re at home or on the road for shorter road trips when compared to a normal regular season.

The playoff structure will feature 16 teams competing in the traditional best-of-seven, four-round format and will conclude around mid-July with the plan of returning to a “normal” hockey calendar for the 2021-22 season. The NHL and NHLPA are planning to release the health and safety protocols, transition rules and critical calendar dates as well as the 2020-21 schedule in the coming days.

“The National Hockey League looks forward to the opening of our 2020-21 season, especially since the Return to Play in 2019-20 was so successful in crowning a Stanley Cup champion,” NHL Commissioner Gary Bettman said. “While we are well aware of the challenges ahead, as was the case last spring and summer, we are continuing to prioritize the health and safety of our participants and the communities in which we live and play. And, as was the case last spring and summer, I thank the NHLPA, particularly Executive Director Don Fehr, for working cooperatively with us to get our League back on the ice.”

NHL, and sports fans in general, are eager for the return of professional hockey to their television screens and maybe someday soon right in front of them behind the half wall. However, there are a plethora of questions that remain unanswered. Where are the games going to be played? What does the schedule look like for every NHL team?

The Avalanche have the right tools to finish at least in the second or third position in this new temporary division. They do have to take on more of the physicality of the Blues, and they’ll be facing the fast-paced skill and determination of the Golden Knights. If the Avalanche play to the best of their abilities and stay healthy, they could find their way into the Western Conference Championship and then potentially onto the Stanley Cup Final.