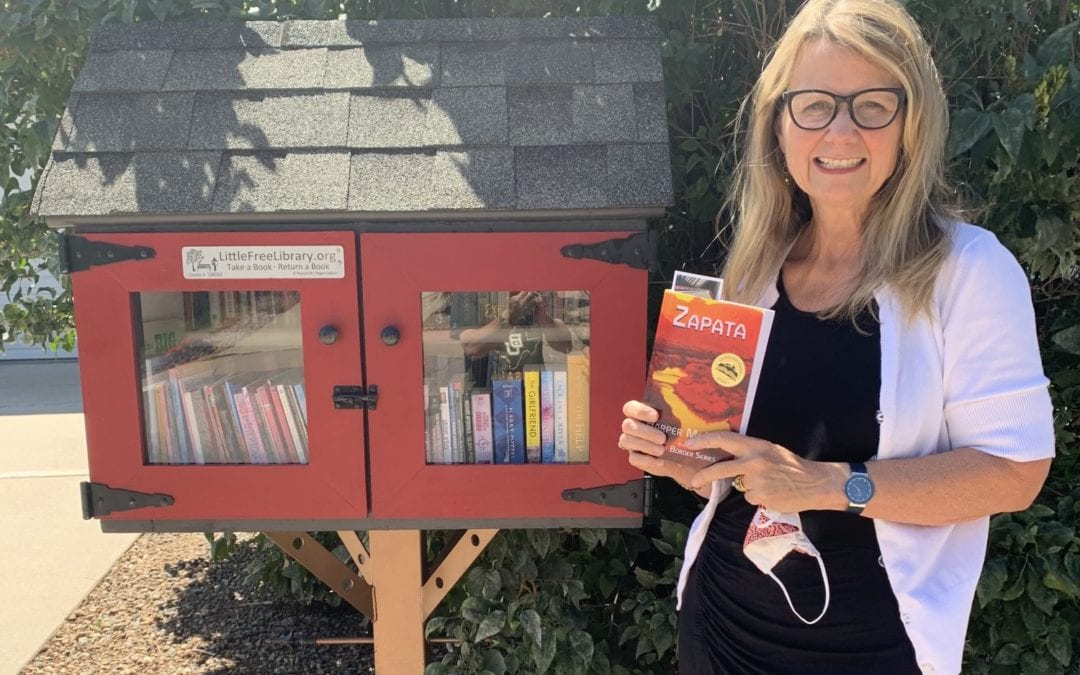 Colorado authors Harper McDavid and Melissa Payne are not inclined to view their weekend activities as trailblazing do-goodery.

“Retail sales are not great right now and, like any product, books are suffering,” McDavid said this week between visits to Little Free Libraries in the metro area. “Plus, Melissa and I are debut authors, so it’s another way for us to gain exposure.”

In fact, it’s one of the only ways. With most bookstores and libraries closed to the public during the coronavirus pandemic, first-time authors McDavid and Payne turned to Little Free Libraries — those handcrafted outposts of honor-system reading — to distribute and promote their work.

“Zapata,” McDavid’s thriller set along the Texas/Mexico border, won the romance category in both the 2020 Colorado Authors’ League Writers Awards and the 2020 Colorado Book Awards. It’s now part of a “book-bombing” program from the Colorado Authors’ League, which initially marked July 27 through Aug. 2 to canvass Little Free Libraries across the state, restocking them with new and original works from Colorado writers.

The campaign proved so popular that McDavid and Payne are extending it beyond the original week-long window and through the end of August, while also inviting other writing groups to join them. It’s gotten the attention of Little Free Library’s head office in Hudson, Wis., which views it as a first-of-its-kind experiment.

“Book-bombing’s been done, without a doubt, and authors have been doing it individually,” said Greig Metzger, executive director of Little Free Library, which counts roughly 100,000 registered and trademarked boxes around the world. “But I’m not familiar with any program, anywhere, that’s formally organizing authors to do it.”

More than two dozen Colorado authors have already planted their works in the book-sharing boxes, which cost about $40 to officially register with Little Free Library. Registering with the organization adds a nameplate and a spot on the global locator map at littlefreelibrary.org/ourmap, as well as connecting stewards (as the individual, all-volunteer owners are called) with resources.

Denverites, in particular, have been uncommonly friendly to Little Free Libraries, which tend to dot residential (and, less frequently) commercial sidewalks like birdhouses offering snacks for curious readers. In 2017, the Mile High City won a City of Distinction award from the 501(c)(3) nonprofit organization.

“We’ve watched Denver for a long time, and (it’s) done some marvelous things,” said Little Free Library founder Todd Bol, who traveled to Colorado to present the award to the lieutenant governor’s office and others at the time. “Denver’s one of our absolute leading cities in the country, right up there with L.A.”

Even then, metro Denver boasted more than 500 Little Free Libraries, building on the handful that began popping up in late 2011 and early 2012 — and quickly outstripping the amount in larger cities such as Boston, New York and Seattle. Bol set up the first Little Free Library in Wisconsin in 2009; now there are about 1,200 across Colorado, Metzger said — not including unregistered versions.

No matter how successful, the project won’t make any money for its writers or their publishers, and it relies on donations from individuals and publishing houses. But for many authors, simply being read and appreciated is a gift at the moment.

“It’s a win-win as far as we’re concerned,” said McDavid, who has watched traditional libraries struggle to keep up with demand for book borrowing. “I volunteer at Jefferson County Public Library, and even if you request a book, it takes forever to get to you right now. So this is a way for us to give back to the community — and get ourselves out there a little.”

While the distribution only amounts to a book or two per day, per author, the program is already showing results. The first book McDavid donated contained a bookmark with her contact information. Within hours, someone reached out to her asking if they could get copies of “Zapata” for a book club.

“That’s like a dream,” she said. “We’re promoting (the program) on social media and ideally will be contacting other authors in places like the U.K., because these (libraries) are all over the world and we’d like to see this grow.”

“We had about 50 to 60 authors interested but only had a week to do it,” Lundy said. “Now that Harper is pushing it to a whole month, we’re readying other freebies, like a bilingual book of writing tips and prompts for grades 1 through college. … At least half the people in (the Colorado Authors’ League) also taught school, so we have a feeling we can create a small army to reach out to these kids stuck at home.”

While Metgzer is unable to track the number of overall visits to Little Free Libraries, he said anecdotal evidence has shown a huge increase in their use since mid-March, with more books going out than returning. He said the way stewards have responded to the pandemic shows the unique place Little Free Libraries occupy in their communities.

“People have been (stocking) them with shelf-stable food, face masks and personal toiletries in addition to books,” he said. “They’ve turned into little beacons for engagement and, helpfully, they don’t require interacting with another person.”