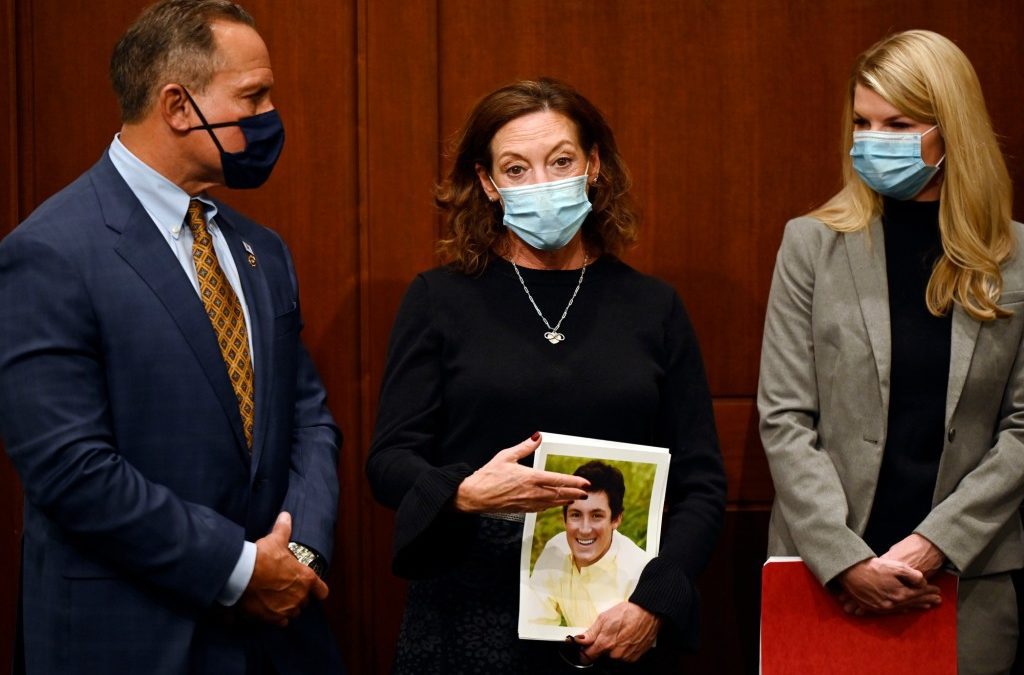 Braden Burks, 24, died alone in his Denver apartment in 2019 after swallowing what he thought was an oxycodone pill he purchased from a high school acquaintance.

But the pill instead contained illicit fentanyl — an extremely potent synthetic opioid often disguised as prescription pills. His family found his body the following morning.

Burks was a smart, popular and hilarious young man who loved sports and held his mom’s hand when they attended church, his mother Tami Gottsegen said. Burks knew about the danger of fentanyl because Gottsegen had talked to him about it. He likely bought the pill because he had chronic sleep issues and was seeking help sleeping, she said.

“You think it can’t happen to your family but it can,” Gottsegen said.

Burks is one of the thousands of Coloradans who’ve died during a spike in drug deaths that prompted Colorado’s top law enforcement officials on Thursday to call for state lawmakers to enact harsher penalties for people selling fentanyl, more resources for police to investigate overdose deaths and increased addiction treatment resources.

The push for changes in the law comes as Colorado continues to break horrific overdose death records year after year. At least 1,477 Coloradans died of drug overdose deaths in 2020 — the highest annual number on record — and deaths in 2021 are expected to surpass that record. Illicit fentanyl was a major contributor to the increased deaths in Colorado, according to the Colorado Health Institute.

In 2018, an average of nine Coloradans a month died of illicit fentanyl overdose. In the first half of 2021, that monthly average grew to 64 — or two a day.

Weiser, three district attorneys and Douglas County Sheriff Tony Spurlock called for lawmakers to reassess a 2019 bipartisan bill that made possession of less than 4 grams of fentanyl a misdemeanor instead of a felony. Because fentanyl is so potent, 4 grams of the synthetic opioid is enough to kill hundreds of people, Weiser said.

“These laws were made before we understood the deadly impact of fentanyl,” he said.

The group of law enforcement officials also wants lawmakers to create a “drug distribution resulting in death” law that prosecutors could pursue against dealers whose customers overdose and die.

Details of the proposed legislation are still being worked out. The law enforcement leaders were not sure exactly what amount of fentanyl should trigger felony charges and were also unclear as to what level of dealer could be liable for prosecution under the proposed distribution resulting in death law or whether it would apply to someone who gave someone a pill they believed to be non-lethal.

But Lisa Raville, executive director of the Harm Reduction Action Center, said calls for harsher criminal penalties have not worked to stem drug use or selling in the past. She agreed that the rate of overdose deaths in Colorado is a public health crisis, but said leaders should focus on a public health response.

“If stigma, shame and incarceration worked, we’d have figured this out forever ago,” she said.

Instead of locking up drug users, state leaders should focus on making the overdose-reversal drug naloxone more available and developing safe-use sites where people can use drugs under supervision, Raville said.

“You need to have people using with other people at a safe site that’s not a bathroom, that’s not an RTD station,” Raville said.

When asked if he would support the establishment of safe-use spaces, Weiser said he would watch how the sites function in other states first.

Two of the sponsors of the 2019 bill that changed possession of up to 4 grams of many drugs from a felony to a misdemeanor also doubted that lowering the limit would impact overdose deaths.

“I’ve dealt with a lot of people who are addicted and I’ve never heard one say, ‘Oh, now it’s a felony so I’m going to stop,’” said Rep. Shane Sandridge, a Colorado Springs Republican, former police officer and sponsor of the 2019 bill.

The goal of the bill was to reserve felonies for people dealing drugs and keep people who are only using drugs from garnering a felony record that would keep them from jobs, housing and other services, he said.

The 2019 bill does not stop prosecutors from pursuing charges like distribution that carry harsher penalties if they believe someone is selling drugs, Denver Democratic Rep. Leslie Herod said. The state’s drug distribution statute states someone can be charged with a Level 3 felony if they are selling up to 14 grams of a Schedule II controlled substance, which includes fentanyl.

Criminal investigations into fatal overdoses are extremely complex and time-consuming, Boulder County District Attorney Michael Dougherty said. It often involves seizing and analyzing the contents of several phones to trace where the drugs came from. The district attorneys called for more resources for law enforcement to pursue those investigations.

Gottsegen, Braden Burks’ mother, said her family was lucky that a Denver detective thoroughly investigated her son’s death and was able to build a case that put the seller of the pill in federal prison under the federal distribution resulting in death statute. She hoped that every family who loses a loved one to drug poisoning has the opportunity for that closure.

“I feel very strongly that every death should be investigated and every dealer should be prosecuted,” Gottsegen said.

Sen. Brittany Pettersen, who plans to work on the fentanyl legislation, said she also plans to focus on increasing access to treatment for addiction and drug use because there is not enough. Community education is also critical to stop the deaths, the Lakewood Democrat said. People need to talk to their kids and loved ones about fentanyl infiltrating many types of drugs.

Almost every type of street drug now contains fentanyl, including cocaine, methamphetamine and heroin, Raville said. Testing strips that allow drug users to see whether their drugs have fentanyl can save lives now, but might be obsolete within a few years when she expects almost all drugs will contain fentanyl.

“You’re always going to have a felony on you and you’re not even going to know,” Raville said.