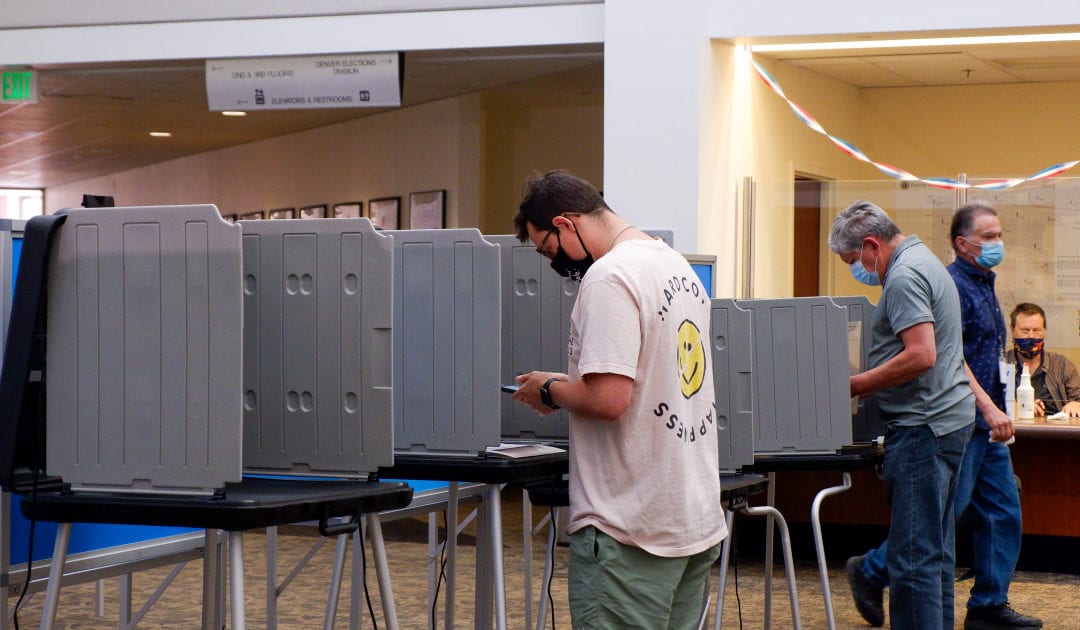 Colorado voters will decide 11 statewide policy questions on the November ballot — a list of far-reaching measures that will help set the direction for the state’s future.

The 2020 ballot asks voters whether Colorado should put limits on abortion and create a state program designed to provide paid time off to workers for medical and family leave.

A handful of fiscal issues will decide how much residents and businesses pay in property and income taxes, as well as tobacco taxes and state fees.

And two other measures are first-in-the-nation questions for voters that will determine how to award the state’s presidential electors and whether to reintroduce an endangered species.

It’s a lot to consider. Be sure to watch debates on key ballot measures hosted by PBS12 and The Colorado Sun posted below. And you can learn more about the measures in the state’s official Blue Book ballot guide; it’s available in English and Spanish.

Here’s a quick breakdown of the ballot questions and links to learn more.

(Click the links below to jump to that section.)

What’s the question: Whether to repeal the Gallagher Amendment, which sets a fixed ratio for property tax assessments in Colorado at 45% for residential and 55% for commercial properties.

What’s at stake: If the measure is approved, homeowners won’t get a projected 18% property tax break in 2021 but it will provide financial relief to local governments and school districts that are facing dire reductions in spending and reduced services, particularly in rural areas because of the inequities in how the amendment works.

Amendment C: Expands ability of nonprofits to conduct bingo and raffles as fundraisers

What’s the question: The state constitution prohibits nonprofits from hiring outside firms to conduct bingo and raffles to raise money. The measure also makes nonprofits eligible for licenses after three years instead of the current five years.

What’s at stake: The easing of rules regarding bingo and raffles held by nonprofits will open up new fundraising opportunities, but critics worry it represents a professionalization and expansion of charitable gaming.

Amendment 76: Citizenship question to vote cuts would-be 18-year-olds out of the process

What’s the question: The constitutional amendment would specify that only U.S. citizens age 18 and older are eligible to participate in Colorado elections.

What’s at stake: The question mostly reaffirms existing law in Colorado — with one notable exception. In 2019, Colorado lawmakers gave 17-year-olds the right to vote in primary elections as long as they turn 18 before the general election. That would no longer be possible if the measure is approved.

What’s at stake: The question of whether to expand gambling is seen by some as a moral one, while the casinos and localities where they are located see it as an opportunity to boost revenue. About 80% of state-sanctioned casino taxes go to community colleges with the remainder for counties and cities where the casinos are located.

What’s the question: The measure gradually increases taxes on cigarettes and tobacco and nicotine products over seven years to generate up to $276 million a year when fully implemented.

What’s at stake: The tax revenue would first go toward education, housing and rural schools to relieve pressure on the state budget after $3 billion in cuts made earlier this year. Starting in 2023-24 most of the money would go toward providing preschool for 4-year-olds. A similar measure to increase tobacco taxes failed a year ago, but proponents have broader support this time and it would help achieve one of Gov. Jared Polis’ campaign promises for universal preschool.

Proposition 113: Whether to join the national popular vote compact instead of current Electoral College system

What’s the question: Gov. Jared Polis and Democratic lawmakers approved a law in 2019 adding Colorado to the national popular vote compact, but critics collected enough voter signatures to seek a repeal at the ballot box in 2020.

What’s at stake: Under the national popular vote compact, Colorado would award its nine electoral votes to the presidential candidate who wins the most votes nationwide rather than the candidate with the most votes in Colorado, which is the existing system under the Electoral College. However, it won’t take effect until states with a collective total of 270 electoral votes — the total needed to win a presidential election — join the compact.

What’s the question: The measures directs the Colorado Parks and Wildlife agency to reintroduce gray wolves in western Colorado starting in 2023.

What’s at stake: The state’s wildlife commission rejected a reintroduction proposal in 2016 citing threats to big game like elk and opposition from ranchers, who could lose livestock revenue. Wolves currently live in Wyoming and New Mexico, and the vote comes as federal officials recommended the removal of protections for gray wolves.

Proposition 115: Prohibit abortions after 22 weeks of pregnancy unless life of woman is threatened

What’s the question: Whether to ban abortions after 22 weeks of pregnancy, unless a physician determines the woman’s life is threatened. It does not include exceptions for situations involving rape or incest.

What’s at stake: Colorado is one of seven states with no prohibitions on abortion at any point during a pregnancy, an issue that is getting more attention with a shift in the Supreme Court that may limit the constitutional right to abortion under Roe v. Wade. If the measure is approved, it includes penalties for doctors who violate the law, including a misdemeanor criminal charge and loss of medical license for at least three years. There is no penalty for the woman.

Proposition 116: A income tax cut for individuals and corporations, but less money for state

What’s the question: The measure asks voters for approval to permanently reduce the state’s income tax on individuals and corporations to 4.55% from 4.63%.

What’s at stake: The income tax cut — a 1.7% decrease — would save the average taxpayer in Colorado $37 starting for tax year 2020, which proponents argue is helpful amid an economic crunch. How much savings people see depends on income level: Taxable income of $50,000 a year leads to a $40 tax cut while taxable income at $250,000 would get a $200 break.

Fiscal analysts report the reduction in state tax revenue is $154 million in fiscal year 2021-22, which represents a 1.2% cut in revenue for annual discretionary spending from the  general fund. The spending primarily goes toward health care, education and the prison system.

Proposition 117: Put limits on fees created by the Colorado legislature for state enterprises

What’s the question: Much as Colorado requires approval of tax increases at the ballot box under the Taxpayer’s Bill of Rights, this measure would require voters to consent to fees to create a new state enterprise that collects $100 million in revenue in the first five fiscal years.

What’s at stake: A state enterprise is effectively a government-run business, such as the lottery and parks, where fees are charged to cover the cost of the services. Since the passage of TABOR in 1992, government fees have increased significantly. The broader question is how much power voters should have over state government finances or whether it should remain delegated to elected lawmakers.

What’s the question: The measure would create a new $1.3 billion state-run paid family and medical leave program that, starting in 2024, would allow employees up to 12 weeks of leave and retention of their job. The program is funded by employees and employers who each pay 0.45% of a weekly paycheck into a statewide pool starting in 2023.

What’s at stake: Most employers and employees will be required to participate and questions remain about the financing that could demand the increase of payments into the system. The most an employee could claim is $1,100 a week in wages.

This page will be continuously updated with more coverage of 2020 ballot measures ahead of the November election.