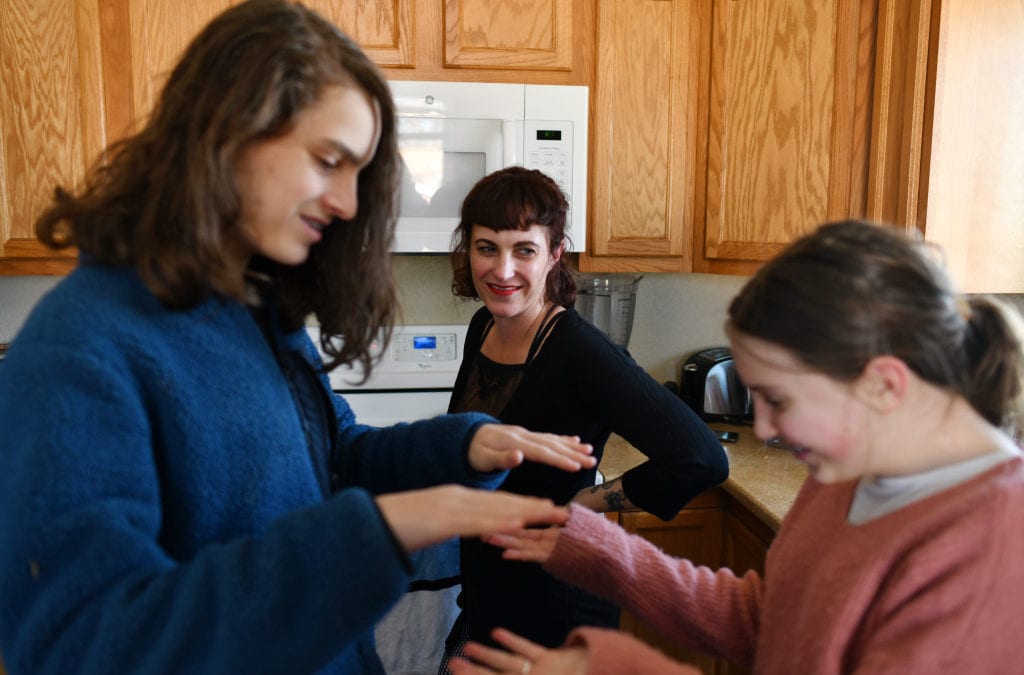 Like roughly nine in 10 Coloradans, Whitney Nichols makes the rent every month.

She’s self-employed and sometimes has gone weeks during the pandemic without a paycheck. Nichols’ kids don’t get new clothes, she can’t afford fees for extracurricular activities. She’s often worried about her cellphone being cut off due to nonpayment.

But with help from loved ones and some government aid, the 39-year-old Wheat Ridge resident has staved off eviction. And she has at least one major incentive to keep paying on time: If she’s even a day late, she says, her landlord can charge her more than $400 in late fees.

“Other things might not happen, but rent always does,” Nichols said, “because I can’t get into that situation. And I can’t get evicted, because then what?”

U.S. Census survey data shows that about a quarter of Colorado renters — some 181,000 households — have slight or no confidence they can make rent without aid. But the rental housing industry argues that stories like Nichols’ are evidence that the state is doing OK when it comes to managing the housing insecurity crisis. The industry also believes that assistance programs and temporary policy changes the immense amount of need exacerbated by the pandemic.

The counterargument from a group of Democratic state lawmakers — mostly Black and Latina women — is that stopgap solutions, like government aid for landlords and renters, aren’t sustainable. They say the state needs to bolster protections for the long term by shifting power to tenants who, in non-pandemic times, often face high late fees and lease-breaking fees and are at a substantial disadvantage in eviction court.

Likely to be piled into at least five separate bills, their proposals include creating a new state eviction moratorium that possibly runs into 2022; changing eviction court policies to give tenants more time and flexibility to resolve cases; and limiting fees for late payments and breaking leases.

“It’s about humanity, empathy and economics,” said Rep. Dominique Jackson, an Aurora Democrat who was once homeless. She’s sponsoring a couple bills, including one to allow undocumented people who have been almost entirely shut out of government aid in the pandemic to receive housing assistance. Another bill would limit landlords to one rent increase per year.

There have been relatively few evictions in the state in the pandemic: just 386 in January 2021, compared to about 3,600 in January 2020. But state and federal eviction bans protecting most renters are a big reason for that, and Colorado hasn’t had a statewide ban since New Year’s Day. The federal ban remains in place but is notably weaker than the state’s and it may be withdrawn soon following that it’s unconstitutional.

Lawmakers don’t want to wait on Gov. Jared Polis or President Joe Biden to keep these protections going. Most of the state-level proposals are expected to formally debut at the Capitol this week.

Few in the legislature would disagree, but passing these kinds of bills hasn’t been easy lately. One day before the coronavirus was discovered in Colorado, state lawmakers . And in the spring, Democrats were split on a proposal to install an eviction moratorium into the fall, and .

Colorado has relied on federal and state money in lieu of structural rental reforms — about $50 million in to date (mostly since the late fall) with another $76 million in pending requests.

State Sen. Julie Gonzales, who led the failed moratorium extension effort in the spring and lives in an income-restricted condominium in Denver, said the pandemic has exposed just how close to homelessness so many are, and she believes it’s “transformed the landscape” in terms of what is politically possible moving forward.

Many landlords and their largest advocacy arm, the Colorado Apartment Association, are staunchly opposed to the stack of legislation, which they feel is counterproductive.

Debi Stobie owns a 24-unit apartment building in Thornton and said if lawmakers hamper her ability to charge fees or evict people promptly, she’ll be less inclined to rent to low-income people in the future. She said it would be better, in that scenario, to leave a unit open for two months in order to get someone who’s guaranteed to pay on time.

She also said she wished the legislature would do more to distinguish between small housing providers and corporate landlords. She hasn’t recently evicted anyone for nonpayment — and often waives late fees or lease-break fees when tenants ask.

“We’re more relational with our tenants,” she said. “We talk with them, they talk with us, we know them. We know their circumstances.”

Such flexibility is rarely afforded to those renting from larger companies, tenants and eviction defense attorneys say. Andrea Fuller, who recently moved from a large Denver housing complex, said her landlord kept adding fees for services she didn’t ask for, like a fancy new thermostat and trash removal program, raising her rent by $600 in four years.

“This is a profit-generating weapon,” she said. “Tenants, we’re just dollar signs.”

Sponsors say the bills in this year’s package would limit late fees to $20 per day or 2.5% of overall rent, whichever number is higher. Lawmakers will also try to limit lease-break fees for evictees, and bill sponsors say they may expand the limitation to all tenants.

David Giesige, who lives in a large building downtown, said he’d have to pay about $6,000 — more than three times his monthly rent — to break his lease.

“There’s such a lack of regulation that landlords think they can get away with anything that they want,” he said.

The rental housing industry continues to say that there isn’t as much to fix as those backing the bills claim.

“There’s been a lot of preaching of crises about both rent payments and evictions,” said Drew Hamrick, senior vice president of government affairs for the Colorado Apartment Association. “We monitor those issues as closely as anyone out there, and the rent payments remain stable and strong.”

The lawmakers behind the bill package know evictions will resume in Colorado. If they’re successful in passing a moratorium, that day may be 10 or more months away.

“I’m not going to point fingers at any individual organization or entity and call them bad people, because they all have come to the table to work with me in many ways. That said, housing legislation is oftentimes the most difficult,” Jackson said. “It’s the all-encompassing nature of it. Everybody is a stakeholder in this and it is complex and it’s emotional.”

This time, she added, “the sense of urgency is palpable.”