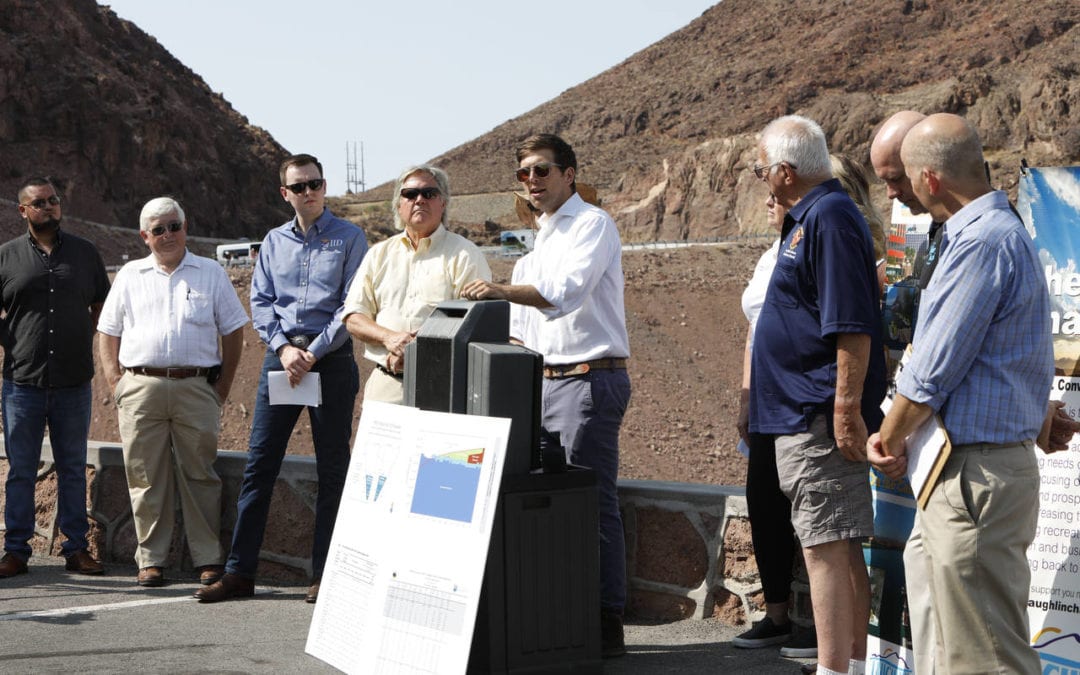 Kyle Roerink of Great Basin Water Network, center, speaks during a news conference at the Hoover Dam in the Arizona side, Thursday, July 15, 2021, to share demands for managing the shrinking Colorado River. (Chitose Suzuki/Las Vegas Review-Journal via AP)

CARSON CITY, Nev. (AP) — Farmers, environmentalists and small-town business owners gathered at the Hoover Dam on Thursday to call for a moratorium on building pipelines and dams along the Colorado River that they say would jeopardize the 40 million people who rely on it as a water source.

They’re pushing for the moratoriums as parts of the U.S. West are gripped by historic drought and hotter temperatures and dry vegetation provide fuel for wildfires sweeping the region. Federal officials expect to make the first-ever water shortage declaration in the Colorado River basin next month, prompting cuts in Arizona, Nevada and Mexico.

“No more business as usual. Why? Because we’re failing: It’s plain and simple. We shouldn’t be seeing that bathtub ring growing like it is,” he added, gesturing toward the white band that wraps the perimeter of Lake Mead, marking former water levels.

Hot temperatures and less snowpack have decreased the amount of water that flows from the Rocky Mountains down through the arid deserts of the Southwest into the Gulf of California.

Scientists attribute the extreme conditions to a combination of natural weather patterns and human-caused climate change, which has made the West warmer and drier in the past 30 years.

Almost a century after seven U.S. states divvied up the river, Lake Mead and Lake Powell — the two manmade reservoirs that store river water — are shrinking faster than expected, spreading panic throughout a region that relies on the river to sustain 40 million people and a $5 billion-a-year agricultural industry.

The U.S. Bureau of Reclamation, which manages water, dams and reservoirs in 17 states, published new two-year projections showing more expected drops in the West’s largest reservoirs. The agency has begun releasing water from Flaming Gorge Reservoir in Wyoming and said Friday that they intend to draw from reservoirs in New Mexico and Colorado in the upcoming months to keep Lake Powell from dropping low enough to threaten Glen Canyon Dam’s hydropower-generating capability.

Nevada stands to be less affected by the cuts tied to the water shortage declaration than Arizona because it doesn’t use its full share of river water. In Arizona, farmers will have to rely more heavily on groundwater and leave fields unplanted.

Officials in both states acknowledge the record lows are part of an ongoing downward spiral for the river but assure water users that they’ve spent years preparing and have enough water to accommodate expected population growth and supply farmers.

But those speaking at Hoover Dam on Thursday blasted water officials and said agreements reached in 2007 and 2019 weren’t fulfilling their purpose to maintain the river. They said proponents of projects to facilitate more water consumption weren’t being realistic about action needed to ensure the Colorado River continues to supply water and hydropower to the region’s cities and farms.

Utah Rivers Council Executive Director Zach Frankel said state and federal officials should abandon plans to build a pipeline to siphon water from Lake Powell to the Sand Hollow Reservoir in southern Utah. He said it was important to ensure federal infrastructure dollars weren’t spent on projects that enable more wasteful water use and pointed out that Utah’s Washington County — which would benefit from the diversion — uses more water per capita than Las Vegas and Phoenix.

“It is simply madness that as the Colorado River reaches its lowest levels in recorded history that we will be proposing a new water diversion upstream. While the lower basin is going to diet and cutting its water use, we should not let the upper basin go to an all-you-can-eat buffet,” he said.

The Imperial Irrigation District, which oversees water in parts of Southern California and has water rights to roughly 20% of the Colorado River — more than Nevada and Arizona combined — withdrew from the most recent set of negotiations.

JB Hamby, the vice president of the district’s board, said it was important that water management policies made in the future ensured that rural farming communities — which use the majority of the region’s water — wouldn’t bear the brunt of the drought so that cities can keep growing.

“A suburban ‘manifest destiny’ threatens the current and future sustainability of this river and communities that depend on it. We must champion and protect the diverse benefits of irrigated farmland for the West, the nation and the world — for food production and security, the environment, wildlife preservation, recreation and tourism and efficient water management.”

Sam Metz is a corps member for the Associated Press/Report for America Statehouse News Initiative. Report for America is a nonprofit national service program that places journalists in local newsrooms to report on undercovered issues.

Copyright © The Associated Press. All rights reserved. This material may not be published, broadcast, rewritten or redistributed.