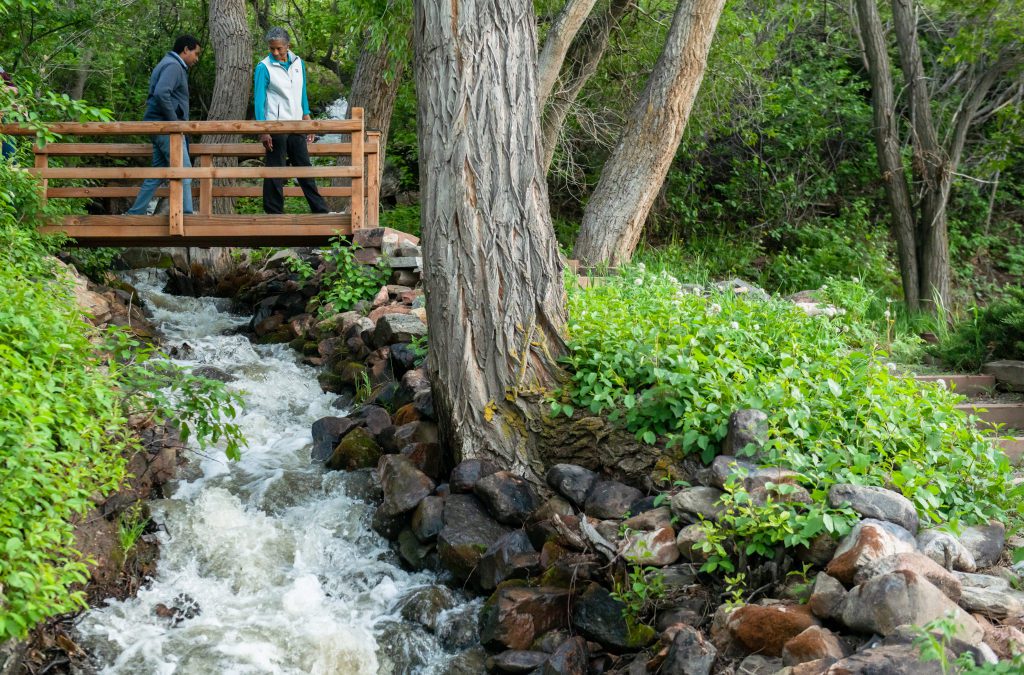 On a recent Monday night in Morrison, U.S. Rep. Joe Neguse walked through a former Civilian Conservation Corps camp where, 80 years ago, impoverished young men from across the country came to escape dire unemployment and build Red Rocks Amphitheatre.

“It worked before and it can work again,” the Democrat from Lafayette said of the New Deal-era program, which he and President Joe Biden would like to revive — albeit on a smaller scale and focused on combating climate change.

Neguse’s plan is to empower nonprofits and government agencies to build trails and fences, fight forest fires, remove invasive species and do an array of other work, primarily on public lands. In return, the organizations would receive federal money.

“Every forest could give me a list of projects in a few weeks and we would be busy for a very, very, very long time,” said Ryan Banks, program director at the Rocky Mountain Youth Corps in Steamboat Springs.

The plan is to spend $10 billion expanding existing corps and send $14 billion more to those federal agencies that pay the corps for work, such as the U.S. Forest Service and Bureau of Land Management. Biden has signaled his support for Neguse’s idea but the money will need to come from Congress, likely as part of a large infrastructure plan that is still in the works.

“This (effort) will create hundreds of additional jobs a year through conservation corps in Colorado,” said Scott Segerstrom, executive director of the Colorado Youth Corps Association.

This 1930s-era Civilian Conservation Corps building at the Denver Mountain Parks headquarters in Morrison, currently being restored to house headquarters offices, is pictured during a facility tour for U.S. Rep. Joe Neguse, D-Lafayette, led by city representatives and Denver Parks & Recreation staff on May 24, 2021. The tour included walk-throughs of Denver Mountain Parks buildings that were originally constructed as housing, dining halls and other support infrastructure for workers in the 20th century Civilian Conservation Corps.

CCC, past and present

Red Rocks Park has one of the last intact CCC camps in the country. Thirteen of the original 14 buildings still stand. A small museum, open to the public by appointment, holds the original cots that CCC workers slept on and a stove they used for warmth.

“It was one of the largest of the New Deal programs and it was Roosevelt’s favorite program but it was also the most popular federal program in history,” said P. O’Connell Pearson, author of “Fighting for the Forest: How FDR’s Civilian Conservation Corps Helped Save America,” a 2019 book.

Three million young, impoverished men worked for the CCC over nine years from 1933 to 1942, serving for up to two years and earning $30 per month, $25 of which had to be sent home to their families. The camps bought their food locally, a boon to those struggling areas.

“Initially there were a lot of towns or rural areas that were hesitant to have camps nearby, because you’re talking about 200 or so single young men moving in down the road from you,” Pearson said. “It sounds like a huge frat party and people were hesitant. But once it got going, people were clamoring to get camps near them. They wanted them there.”

About 32,000 men were employed at Colorado’s 172 camps. They built roads, trails and campgrounds; planted millions of trees; thinned crowded and dead brush from the forests; and fought fires. Their work remains at Red Rocks, Hanging Lake and throughout Colorado.

There are eight existing conservation corps in Colorado (five nonprofits and three run by counties) that enlist about 1,800 people and have a collective annual budget of $14 million. They employ AmeriCorps volunteers, military veterans and teenagers.

Some modern corps, such as the Rocky Mountain Youth Corps, involve camping, in which crews of eight to 10 people stay together for 10 weeks straight, working and playing away from home. Others, such as the Southwest Conservation Corps in Durango and Salida, prefer a program that lets young volunteers return home in the evenings and on weekends.

The Rocky Mountain Youth Corps has spent five years restoring and rerouting trails atop Mount Elbert, the highest point in the state. Their basecamp is at 11,000 feet and workers spend eight days on the mountain before six days off. All food must be carried up the mountain, Banks said.

“What we’re seeing from our young people is that they don’t necessarily just want to come and work on a trail crew for a summer,” said Kevin Heiner, director of the Southwest Conservation Corps. “They want to get more training in a specific career field that allows them that steppingstone from working with us … to becoming a paid employee at one of the agencies we work with.”

In the past three years, 175 people ended up becoming fully certified wildland firefighters and 700 were certified to use chainsaws, a critical skill for lands work.

U.S. Rep. Joe Neguse, D-Lafayette, speaks to the press during a tour of Denver Mountain Parks facilities that were originally constructed as housing, dining halls and other support infrastructure for workers in the 20th century Civilian Conservation Corps in Morrison on May 24, 2021.

The White House announced in late March that its American Jobs Plan — a $2 trillion infrastructure package — would include $10 billion for a Civilian Climate Corps. That bill is still being negotiated and Neguse’s bill hasn’t budged since being introduced March 26.

Ohio Democratic Rep. Marcy Kaptur has proposed a similar idea since 2009, with little success. But smaller and more bipartisan help for corps has been signed into law; in 2019, Congress made it easier for federal agencies to work with existing conservation corps and was backed by the late Republican Sen. John McCain.

Corps supporters say they represent the best of government: public-private partnerships that don’t grow government but instead employ young people seeking careers in firefighting and on public lands. In Colorado’s forests and on its mountains, the unmet need is high, they say.

“Operating budgets for our partners are dwindling,” Banks said. “There is an influx of funding when there’s a big fire … but when it comes to basic maintenance and base-level funding, our partners are strapped across the board.”

As he toured the former CCC camp at Red Rocks, Neguse came across a framed copy of the congressional legislation that created the CCC in 1933. In it, he sees a confluence of history and modernity.

“The CCC is something that has captured the imagination of the American public,” the congressman told reporters after the tour. “… It’s really helpful for me to be able to tell stories of the CCC of the 1930s and make the case that it worked before and it can work again.”