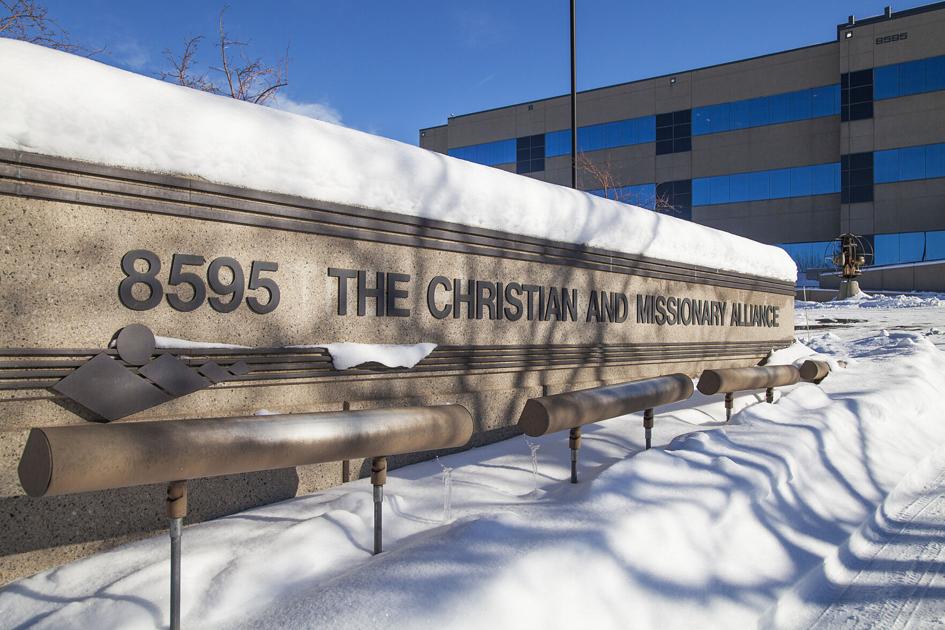 The Christian and Missionary Alliance has listed for sale its national headquarters, which the organization built 31 years ago at 8595 Explorer Drive in Colorado Springs, and is preparing to relocate all operations to Columbus, Ohio, officials said.

In the early stages, less than half of the 130 employees have indicated they will move, said Peter Burgo, director for storytelling and media relations.

“A number of our staff have elected not to relocate because of their love for this community and the sheer beauty of the Pikes Peak region and the Colorado landscape,” he said.

Employees will make final decisions in March, with office closure and relocation scheduled to begin in the summer. Historical archives and a foundation will remain behind for a time, Burgo said.

The organization is leaving Colorado Springs primarily for the same reason it moved here in 1989 from metropolitan New York, where it was founded in 1887: a lack of affordable housing for employees, Burgo said.

In the 1980s, the cost of living in and around New York City had continued to rise, making it difficult for the nonprofit organization to pay its staff enough to afford housing and other living essentials, he said.

Over the past three decades, Colorado Springs has grown and residential real estate prices make it “increasingly difficult for our team members to find affordable housing in this community,” Burgo said.

“It’s put us back in the same situation we were in 30-plus years ago.”

The Christian and Missionary Alliance is both an evangelical Christian denomination with 2,000 churches, including five in Colorado Springs, and a ministry that does missionary work and provides emergency relief services worldwide.

Leaders also wanted to be closer to a large airport, with frequent travel by staff and field workers, Burgo said.

Before the coronavirus pandemic hit, the organization’s board narrowed the selection for its new office to three cities, and Columbus came out on top.

Along with a lower cost of living, about 800 Alliance churches are within a day’s drive of the city.

The organization is negotiating to purchase several parcels of land in Ohio, for a total of 15 acres, compared to the 5 acres it owns in Colorado Springs. Alliance leaders plan to build an event center on the site, and renovate existing buildings into offices.

“We are pursuing a different concept of officing, with shared workspace options and greater interaction with the local community than we’ve been able to pursue at our current location here in the Springs,” Burgo said.

Since being listed on the market in early November, the Colorado Springs building in the Briargate Business Campus had potential buyers tour the building every week, he said.

The assessed market value of the property is $8.6 million, according to the El Paso County Assessor’s Office.

The ministry was “made to feel welcome” by the Colorado Springs Chamber of Commerce and Economic Development Corporation when it chose the city for its headquarters 31 years ago, Burgo said. Ministry leaders have not talked with the Chamber or EDC about the upcoming relocation, he added.

Chamber and EDC spokeswoman Andrea Mensink said the organization did not want to comment on the move.

Another large Christian organization that had been based in Colorado Springs for years, Christian Booksellers Association, recently closed, as an economic downturn in the industry has affected Christian publishers and booksellers.

The Christian and Missionary Alliance was one of numerous evangelical Christian organizations that moved their operations to Colorado Springs in the late 1980s and early 1990s. The concentration earned Colorado Springs a reputation for being a hotbed for conservative Christian development.

Focus on the Family, The Navigators, the International Bible Society, Compassion International, Young Life, Every Home for Christ, World Radio Missionary Fellowship and others have kept their headquarters in Colorado Springs.

“Above all, we depart the Springs with an enormous spirit of gratitude for how this city has hosted our ministry for more than 30 years,” Burgo said.