Charge the NRA with murder in Colorado. 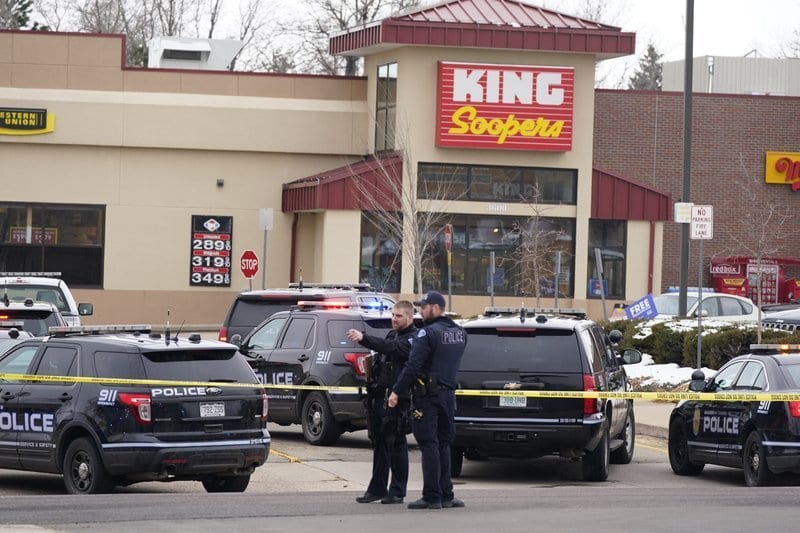 Ponder this timeline of events.

In 2018, the city of Boulder, Colorado passed an assault weapons ban in response to the shooting in Parkland, Florida where 17 people were killed at Stoneman Douglas High School. The NRA, predictably, stomped, yelled, screamed, made bad faith arguments, and fought against that ban for three years. They finally succeeded a couple of weeks ago.

In an @NRAILA-supported case, he ruled that the city of Boulder’s ban on commonly-owned rifles (AR-15s) and 10+ round mags was preempted by state law and STRUCK THEM DOWN. https://t.co/wmdhGG16pc

On Friday evening, a judge in the Centennial state gave law-abiding gun owners something to celebrate. He ruled that the city of Boulder’s ban on possessing and transferring commonly-possessed “assault weapons” and ten-round magazines was preempted by state law and struck them down. This was an NRA-ILA supported case.

The very next week, 21-year-old Ahmad Al Aliwi Alissa bought an AR-556, which he would not have been able to purchase under the previous ban, and then he murdered ten people on Monday. The response from the NRA? The usual junk about a well-trained militia.

A well regulated militia, being necessary to the security of a free state, the right of the people to keep and bear arms, shall not be infringed. pic.twitter.com/eFBP2PTTUu

I don’t have any interest in going back and forth about the right to have guns or what kinds of guns or how many guns or who should have access to them. The conversation goes nowhere and it’s a waste of energy. Instead, let’s talk about the argument that if someone is mentally ill and wants to kill a bunch of people, they’re gonna do it whether they have access to an assault rifle or not.

One: Mental illness isn’t an umbrella term to just slap on a mass murderer and say “well, he’s off his rocker, so what do you expect?” Millions of people walk amongst us with various mental illnesses and never have the urge to kill anybody, let alone ten people. I have depression and anxiety and the only person I want to kill is my shitty roommate….but I wouldn’t, because that’s wrong, and I’m not a violent person who would actually do anyone harm.

Two: Ease of access and operation is key. If you want to kill a lot of people, by far the fastest way to do it would be to build a bomb. But this is America — most of us are too lazy to look up how to do it and too dumb to actually put it together. If Mass Murderer is a function of Violent Tool plus Mental Illness, then everybody with a psychiatrist would be building bombs and blowing up the neighborhood. In comparison to bombs, guns are much easier to access and operate, so if you want to kill a lot of people quickly, go get yourself an assault rifle or something similar.

Three: Kind of part Two-B, but even if you do have the urge to kill a lot of people, unless you have access to a Violent Tool like a gun or a bomb, the urge alone isn’t enough to take as many lives as a gun would. People do use knives to commit murder, and you could make the argument that all of these mass shooters would take a knife to a public place and kill a lot of people instead. Your argument would be wrong because, again, knives take a lot more effort than guns and at a much greater risk to the murderer so the killing sprees would be far less frequent, but if you want to ignore that, fine. The deadliest mass stabbing in history took place in China in 2014 where 31 people were killed and 141 people were wounded. If you’re thinking “well your argument was just disproved,” here are two details that make it far less deadly than a mass shooting — 141 people were injured and didn’t die and there were 8 attackers. There are no mass shootings where there are almost five times as many injured victims as dead victims, and if 8 people with assault rifles went into a crowded train station to kill people, the death toll would be in the hundreds. In London back in 2017, three men killed 8 people and wounded 48. There were six times as many injured victims as dead victims, because you physically cannot kill as many people with a knife as you can with a gun.

So the argument that “killers will kill anyway” can be ignored. Yes, violent criminals will still be violent…but there will be fewer casualties. If I was in a public place with a vicious murderer intent on killing as many people as possible, I’d much rather take my chances running from a knife than a bullet. Every NRA enthusiast making the argument that “knives kill people too” would also prefer to run from a blade than a gun, but they won’t admit it out loud. Instead, they’re working as hard as they can to make sure the deadly weapon that is easiest to operate is also accessible for everyone. And they are murderers.