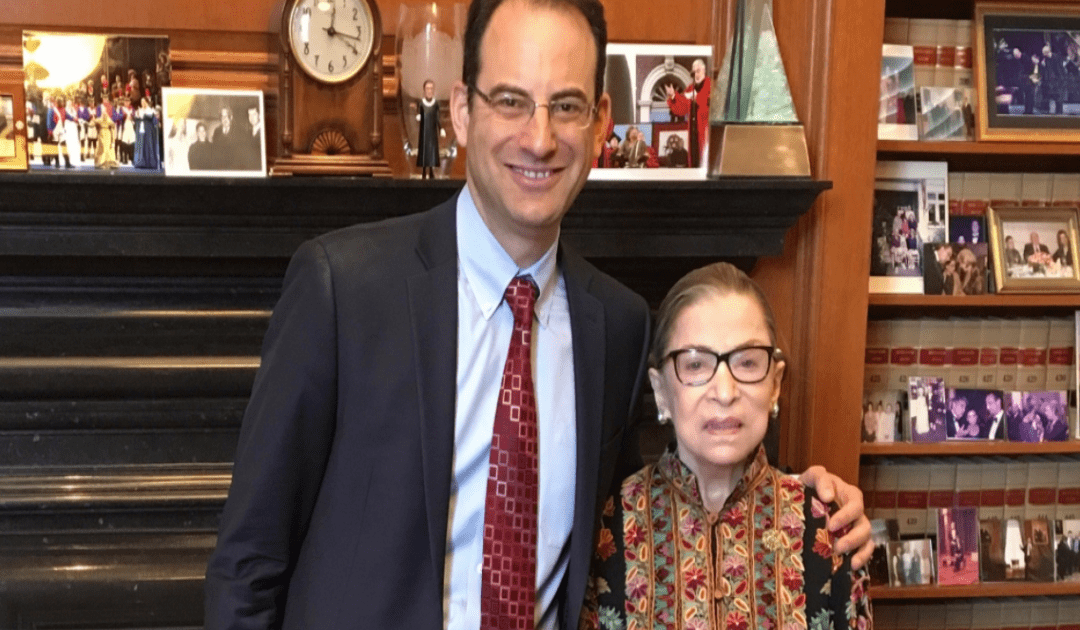 The Colorado attorney general who clerked for Ginsburg in the 1990s was poised to observe the Jewish High Holy Days when he heard the announcement. “2020 has already been such a hard year,” he said. “Add losing Justice Ginsburg, who was such a guiding light … it is such a hard thing.”

Colorado Supreme Court Justice Melissa Hart, who came to know Justice Ginsburg when she was clerking for Justice John Paul Stevens in 1996, said she, too, has felt a deep sense of loss.

“It’s not that I was close to her, but she made such a difference in my life, in everybody’s life,” she said.

Hart and Weiser were both newly minted lawyers when they worked at the Supreme Court, and their memories from the experience are vivid.

“This job was an incredible opportunity for me,” Weiser said. “It was like winning the lottery.”

The other clerks, he said, had “fancy backgrounds” with law degrees from Harvard and Yale. “I was the only graduate from NYU Law School who got a clerkship that year. I had a real sense of awe about this opportunity.”

As a result, Weiser said he was determined to do the job well and to learn as much as he possibly could.

“I worked harder than I ever did in my life – including now – and I never felt as much pressure,” he said.

Ginsburg was known for her intellect, her work ethic and her precise and eloquent legal writing.

“She was thoughtful about every single word in every opinion,” he said. “She had a commitment to and a vision of perfection in legal writing.”

The demands she placed on him, though rigorous and challenging, were “a blessing,” Weiser said.

Hart remembers gatherings that Ginsburg would host in her chambers for all the Supreme Court clerks. “She wanted to get to know all of us,” she said.

She served tea and cakes baked by her husband, Marty. “She was very proud of his talents in the kitchen. She was such a remarkable human being. She was quick, smart, funny.”

But there was so much more.

Hart was a women’s studies major at Harvard when she first encountered Ginsburg’s influence.

“I was studying equal protection decisions and I read the opinions in some of the cases she argued,” Hart said. “I realized that the law is powerful, and I realized how it changes people’s lives.”

It was then that she started thinking about going to law school. “I think it was because of this capacity of law to make a difference in the world.”

Ginsburg, she said, “really shaped the fight for women’s equal citizenship that began in this country in the 1970s.”

While Ginsburg was in the eye of the storm throughout her career – especially as director of the Women’s Rights Project for the ACLU – she was known for her composure.

“There’s a quote of hers that I think about a lot,” Weiser said. “It’s something like, ‘Never react in anger.’ She kept her cool and she kept her relationships. She always maintained her equanimity, her calm, even in the midst of a storm.”

The ground-breaking Virginia Military Institute decision to allow women to attend the university occurred during Weiser’s tenure with RBG and, he said, “it was really important to Justice Ginsburg. She looked at it as building on her legacy.”

She received a draft of Justice Antonin Scalia’s dissenting opinion “and it ruined her weekend,” he said, but she didn’t betray her anger. Instead “she fought hard and sharpened her response.”

Hart said she learned key lessons from Ginsburg that have guided her career, first as a lawyer and a professor of law, and now as a judge.

“I loved Justice Stevens very much and I loved working with him,” she said, “but I always disagreed with him about one thing. He dissented whenever he disagreed with what the court was doing, even if it would be an 8-to-1 decision. I’d say, ‘What’s the point’?”

In contrast, Ginsburg carefully considered her dissents in light of their impact on the court and the law.

“She said her dissent was not speaking for today, but for tomorrow. She said that things will change, that the world may change in such a way that what I’m writing now will be the law.

“That’s how I think as a judge.

“Her voice was so important,” Hart said. “She just made such a difference in the world. Not a lot of people get to do that.”

Both Weiser and Hart also were deeply influenced by Ginsburg’s commitment to public service.

“She believed in law in service to justice,” Weiser said, “and her commitment to making a difference and to public service was steadfast.

“That’s something I took from her,” he said. “I had to find my own path. We all have to try to do our best and do our part.”

Hart said Ginsburg was vocal about public service and the importance of lawyers engaging in pro bono work throughout their careers.

“As a judge I can no longer do pro bono work, but that was something I took to heart as a lawyer and always admired about her. She said that if you’re going to have a rich professional career as a lawyer, going out and doing something outside of yourself is essential.”

While Weiser is fielding interviews on CNN and other news media, he said he is “committed to giving myself space to mourn, to remember and to reflect” because though Americans across the country are feeling an enormous sense of loss, for him, it is so personal.

“Still, I know I’m a public figure and a politician, and people are going to ask me things and I have to answer them.”

So, he said, the U.S. Supreme Court “is a critical institution, and rushing now to fill the vacancy without sufficient vetting is not a good thing. We need to consider what does the court need and how do we get it. It’s not good for the court to get too out of step with the public.”

As the political debate rages over the court, Weiser said, “I’ll continue to work on my own sense of equanimity while I do whatever I can to protect the credibility of the court.”

It’s something that was critically important to Ginsburg, he said.

“The stakes are incredibly high.”

For Hart, hope for the future of the court and the country lies in the historic accomplishments of Ruth Bader Ginsburg and the indomitable sense of possibility.

“I think about how recently men and women in this country were treated unequally,” she said. “People forget that it was not that long ago.

“Today, that is inconceivable. My daughter and son can’t imagine a time when they would be treated so differently.”

The kind of change that Ginsburg helped create can still happen, Hart said.

“A decade before it happens, you can’t imagine that it’s possible and then, well, it happens.”

Ginsburg was a superhero, for sure, but there are so many others, Hart said.

“There are more Ruth Bader Ginsburgs out there, lots of them. They are women who are smart and committed to making the world better,” she said. “It will happen.

“I believe the arc of the moral universe truly bends toward justice, and it happens because people – people like Justice Ginsburg – help it happen.”