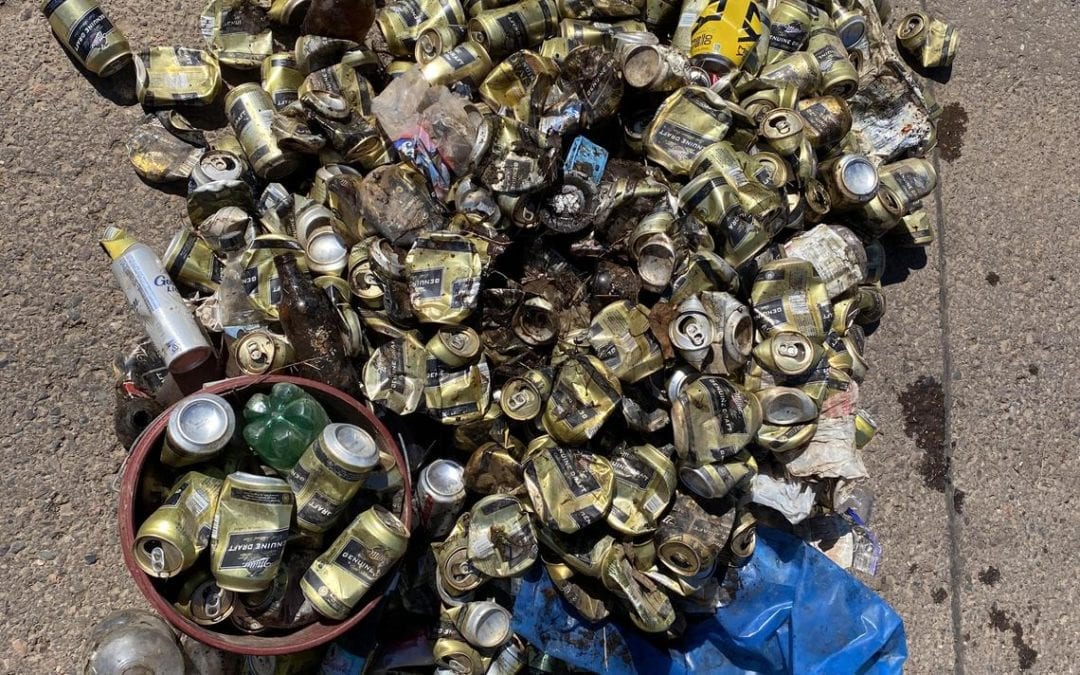 “I like to share nature,” Coan said. “I have a lot of friends who live in the Cities who like to see photos of the North Shore and I love capturing the sights.”

But lately her posts have taken on a slightly different bent — trash. Specifically the garbage that she finds while hiking on the dirt roads that surround Two Harbors.

Normally Coan likes to stick to hiking on trails such as the Superior Hiking Trail or in the local state parks. With the shelter-in-place order in effect, she and her fiance, Dan Walker, decided to change their routes.

“The main trails are super wet and the state parks have been overrun with tourists right now, so we decided to pick a different dirt road every night and walk the dog,” Coan said.

Walker and Coan’s black lab, Aspen, joins them on their hikes. Walker scouts out new potential grouse hunting spots while Coan keeps her eyes peeled for trash to clean.

“I got inspired by the Grounds Keeper program a few years ago,” Coan said. “Now I just can’t unsee it. even if we’re just driving to the store. Once you start seeing it, you can’t stop.”

Grounds Keepers are a coalition of volunteers picked by Granite Gear who pledge to clean up at least 300 miles of trails, parks and public lands every year.

Coan started carrying bags and plastic gloves with her on their hiking expeditions. When they’re done for the evening, she takes a photo of the garbage collected and posts it on her “exploringtwoharbors” Instagram page.

Most of her garbage hauls have been fairly moderate in size, but on Friday, April 24, she hit the mother lode along Airport Road.

“We went out and ended up picking up 547 cans. It was really sad,” Coan said. “There were cans from different eras. So somebody, I assume the same person, has been doing this for years and years. That was the biggest haul I’ve ever had.”

In fact, Coan had to call her Grounds Keeper friend Julie Hukriede to come the next day to help with the clean up. There were too many Miller Genuine Draft cans to collect.

“We didn’t get much exercise that day because we found all of those in about a quarter of a mile,” Coan said.

Otherwise Coan’s finds have been smaller but “disheartening,” she said.

“The gross stuff stands out in your mind, like tampon applicators and condoms. Yesterday there was a Humalog insulin pen,” Coan said. “But there’s also so many cans and bottles.”

She said she hopes her posts inspire people to go out on their own to collect garbage or better yet, not throw garbage out along the roads in the first place.

“If more people are just a little more intentional about looking down and looking for trash, it would make a significant difference,” Coan said. “The walks are fun and it always makes you feel better to leave the earth a little cleaner.”

But also “definitely bring gloves” if you plan to go garbage picking on your own.