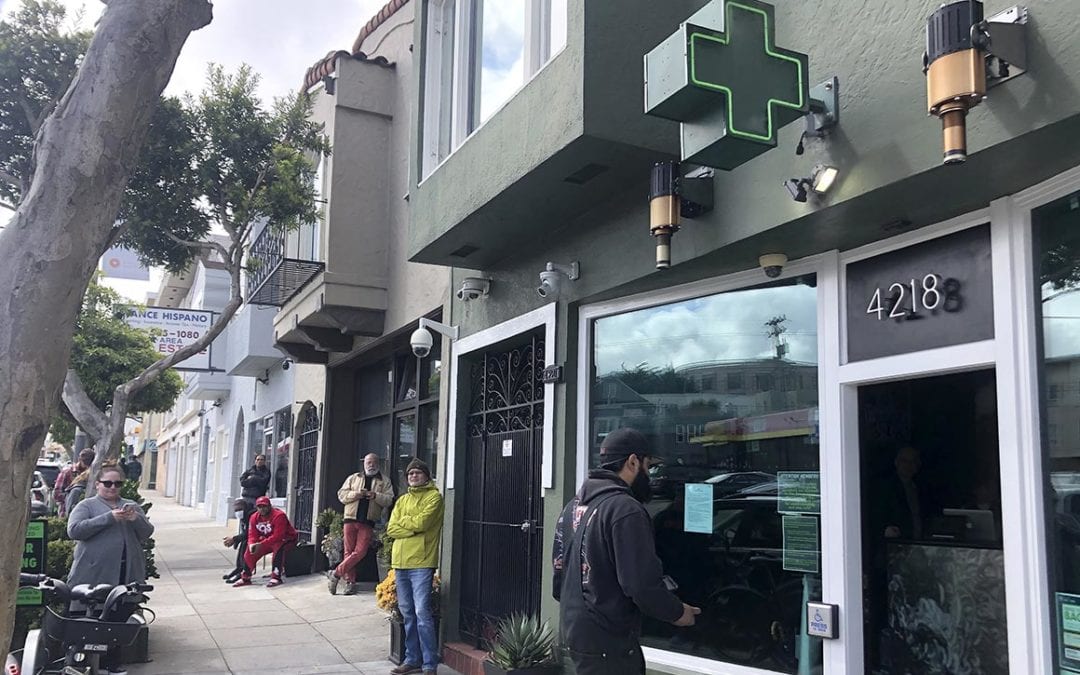 The burgeoning industry does face some stiff financial headwinds: The massive stimulus package moving through Congress this week to help beleaguered businesses shuts out cannabis companies from taking advantage of its benefits, reflecting the continued federal illegality of marijuana. Prior to the recent boom in sales, the industry had been in financial turmoil, with many companies laying off workers and scuttling acquisitions as they ran short on cash.

“I’m frustrated Senate Republicans refused to allow us to include them in this legislation, but we aren’t giving up,” Sen. Patty Murray (D-Wash.) said Wednesday.

In addition, some medical experts question the wisdom of allowing uninhibited access to marijuana during a massive public health crisis. They worry that customers flocking to pot shops could spread the virus, that stoned customers will engage in risky behavior and that smoking pot will worsen the lung damage for people who do become infected.

“If you keep the pot stores open, you’re just adding fuel to the fire,” said Karen Randall, an emergency room doctor in Colorado. “You’re having a whole bunch of people who are trashing their lungs.”

But those warnings aren’t holding sway with public officials — or anxiety-riddled Americans.

Panic buying at the dispensary

As fears about the coronavirus ramped up in mid-March, anxious shoppers began stocking up on toilet paper, groceries — and marijuana. BDS Analytics reported huge spikes in sales that surpassed even 4/20, the unofficial cannabis holiday, when the industry usually sees its biggest sales bump.

“The day before they were going to announce the in-shelter call across [Alameda] county, people were lined up around the block,” said Laura Herrera, a cannabis specialist at The Farmacy dispensary in Berkeley.

Wanda James, CEO of Denver dispensary Simply Pure, said the initial crowds were in part due to fears that marijuana businesses would be shut down.

“The beginning of [last] week was extremely busy, [but] it has tapered a little bit,” she said. “People now feel confident that most of the legal states will allow cannabis sales to continue.”

Dispensaries across the nation described increased cleaning operations, with staffers wiping down countertops with disinfectant in between each customer. They’re also adopting policies similar to grocery stores, such as opening an hour early to serve seniors or only those with compromised immune systems. Some states — including Louisiana and Pennsylvania — are now allowing deliveries.

“It’s imperative that it be made available to those [patients] during this unprecedented time of unrest and uncertainty,” said Pennsylvania Lt. Gov. John Fetterman. “It’s really become indispensable to Pennsylvanians.”

Hiring from the vast ranks of newly unemployed

While the cannabis industry can’t do much to remedy that bloodletting, some companies are looking to hire people who have recently lost their jobs.

Harborside — which operates three shops in the Bay Area — found itself suddenly understaffed as delivery requests increased by 45 percent and phone calls exploded from around 100 to 8,000 per day.

“We went somewhat to an Amazon model of delivery, taking orders one day and sending out delivery the next,” Harborside General Counsel Jack Nichols said. “Employees were staying overnight and staging orders to go out during the day or picked up at the curb.”

Harborside has hired 10 employees in the last few weeks — some of whom were directly laid off as a result of the coronavirus — and plans to hire at least six more. The largest increase was in their delivery fleet, going from four drivers to 10.

And they’re not alone.

“Two and a half weeks ago, our sales just exploded,” said Zachary Pitts, CEO of California cannabis delivery service Ganja Goddess. “People are leaning on delivery more now … even though storefronts are still open in California.”

Pitts estimated that he’s increased his workforce by about 15 percent in recent weeks, and is working on hiring more. The company has suspended normal vetting processes and is instead relying on trusted referrals.

“It’s very hard to hire people quickly just from the standpoint of making sure they’re trained,” he said. “We’re all just trying to get out all the orders and make sure we do it safely.“

As states move to declare marijuana an essential business, the gulf between state and federal policy has never been wider. Congress is poised to enact a $2 trillion stimulus package this week, but the cannabis industry will not see a cent.

“In the same way that cocaine dealers in the United States who are suffering under Covid-19 are not going to be eligible for relief under the stimulus bill, cannabis companies won’t either,” said Hudak of the Brookings Institution. “Illegal businesses do not access legal funding.”

The cannabis industry generated $15 billion in sales last year and employs 340,000 people. Employers and workers pay federal taxes, and are required to comply with other coronavirus-related measures such as paid sick leave coverage.

But for cannabis companies to access assistance made available through the stimulus package, Congress or the administration would need to dictate their inclusion.

A spokesperson for Sen. Jeff Merkley (D-Ore.) said he wants to include such a provision in a future coronavirus aid package. Similarly, Murray said she is “exploring what can be done in the upcoming appropriations process to help them through this crisis and beyond.”