Can Do Colorado brings eBikes to low income Coloradans 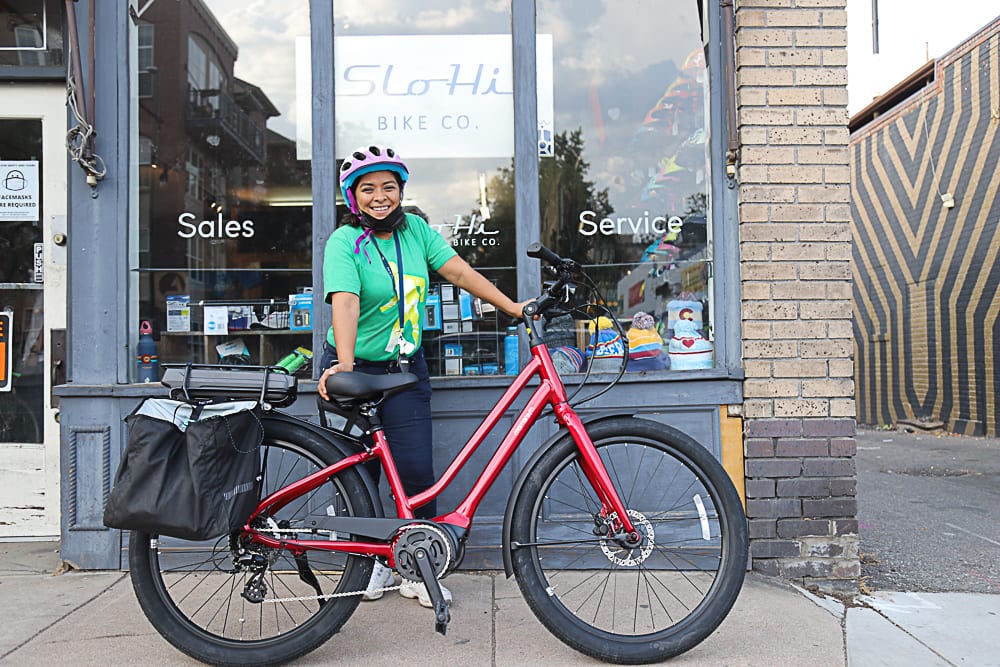 At Bicycle Colorado, we believe in the power of eBikes.

We know that eBikes open bicycling to people who wouldn’t otherwise be able to ride, and we know that eBike adopters generally use them to travel greater distances than they otherwise would on a bicycle. We also know that the cost of an eBike can be a barrier to use, which is just part of why we were thrilled to partner with the in 2020 on the first iteration of the Can Do Colorado eBike Program.

The Program was built to support low income essential workers and demonstrate that eBikes are a safe, healthy and convenient way to take essential trips around town. The Fall 2020 Mini Pilot, which Bicycle Colorado was tasked with creating and overseeing, provided 13 Coloradans with an eBike and equipment needed to ensure safe, year-round riding at no cost.

The Mini Pilot was developed over the course of two months, with Bicycle Colorado hired for program development in July 2020 and bikes distributed in late September. Other partners in the program included:

All funding for the program was provided by the Colorado Energy Office.

The Fall 2020 Mini Pilot took the form of an individual ownership model. Participants were given a Momentum LaFree E+ eBike, plus the following essentials at no cost to them:

I like it because it frees my mind up away from the world for just a moment.

Importantly, individual ownership also removed as many barriers for participation as possible on the part of approved applicants. Providing bikes for individual ownership made it so that participants could go about their daily lives without interruptions, more easily integrating eBikes into their regular routines. Participants were given access to the CanBikeCO app developed by NREL to gather data on trips taken both with and without eBikes after distribution. They were also asked to send in weekly surveys so we could learn more about what encouraged them to ride and what barriers they experienced to riding their bikes.

I wasn’t doing too much physical activity [before getting my eBike]. And you know, my weight was up and I wasn’t eating right. And the bike … makes me want to jump on there just because of the fact that it’s fun. And I enjoy riding.

Research shows that eBikes are an efficient, cost-effective and fun way to travel that can change transportation habits, and our participants were no exception. While we weren’t necessarily surprised by the positive feedback we received from participants, we were pleased to see that they were using their eBikes to shift their transportation habits.

Interviews with participants conducted by Monica Fitzgerald showed, among other findings, that: Since I got the eBike and then joined this program, and I’m no longer using a car … I only want to take a ride or a walk on foot. It’s changed me a lot. I’m getting to places faster … [I’ve] got the full energy to do my work after I get there, to work and back home.

Now that the Fall 2020 Mini Pilot of the Can Do Colorado eBike Program is complete, the Colorado Energy Office has released a of the program. Bicycle Colorado will be providing technical assistance and support to applicants asked to submit a full proposal. We’re excited to remain involved in this next phase of the program, and thrilled to see the state showing that “electric vehicles” means more than just cars by supporting low-income, essential worker Coloradans with the Can Do Colorado eBike program.

The eBike program is part of the Can Do Colorado Community Challenge, through which Colorado’s state agencies, nonprofits, and other partners are offering a variety of resources to local communities and their respective businesses to help safely reopen the economy and point the state towards a healthier and more sustainable future.

The post Can Do Colorado brings eBikes to low income Coloradans appeared first on Bicycle Colorado.