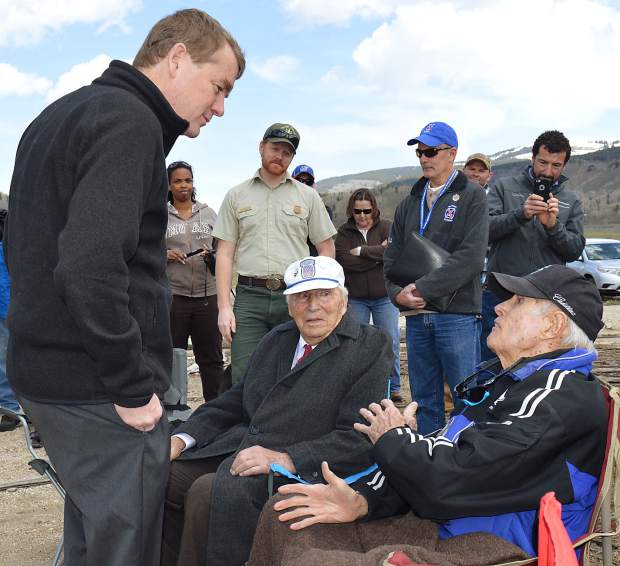 Camp Hale, the U.S. Army facility constructed in 1942 between Red Cliff and Leadville where the 10th trained for World War II, should be preserved, veterans have said.

If the Colorado Outdoor Recreation and Economy Act becomes law, it will be.

Bennet has been working to preserve Camp Hale for the better part of a decade, proposing it as one of the nation’s first national historic landscapes. It’s now part of his CORE Act.

“Coloradans spent the last decade hammering out compromises to develop reasonable public lands bills with broad support. The CORE Act combines the best of those proposals, reflecting their bold vision to boost our economy and protect our public lands for future generations,” Bennet said Friday.

When Bennet was at Camp Hale when he first proposed preserving Camp Hale, hundreds of Colorado veterans made it clear to Bennet and others that the land is important to them.

Crosby Perry-Smith and Vail’s Sandy Treat, both 10th Mountain veterans who are in the Colorado Ski and Snowboard Hall of Fame, were among those who urged Bennet to get legislation done. During that event, Perry-Smith declared it “an excellent idea.”

“The soldiers we honor did not just climb Riva Ridge or take Mount Belvedere, or serve in the Middle East, or come to our nation’s aid, they also shaped much of the state of Colorado as we know it today,” Bennet said during that Memorial Day event. “Their leadership, their resilience and sense of adventure is everywhere. The 10th has produced leaders who have built entire industries from the ground up.”

“They changed our state’s entire economy and changed how people around the world experience the mountains in winter.”

Of the land protected, about 73,000 acres would be new wilderness areas, and nearly 80,000 acres are new recreation and conservation areas that preserve existing outdoor uses, such as hiking and mountain biking, Neguse said.