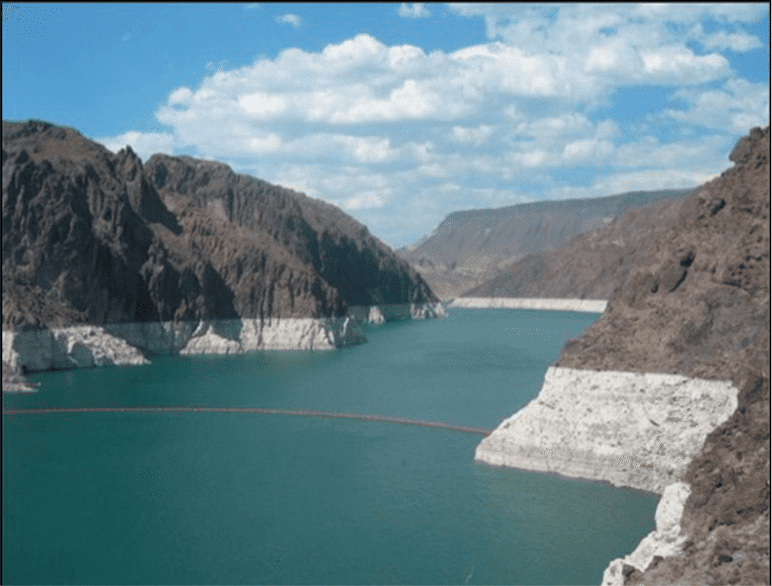 One-thousand, seventy-five feet. That’s the make or break level for Lake Mead, on the Arizona-Nevada border.

Keep the water levels above that, and hydropower for Arizona, California and Nevada from the Hoover Dam stays stable.

Drop below that, and the U.S. Bureau of Reclamation could declare a shortage in the Colorado River basin — and millions of people in the lower basin states start feeling the pinch first.

On Monday the bureau announced the first-ever shortage on the Colorado River basin, meaning limitations on water supplies for three states (Arizona, Nevada and California) and Mexico, beginning in January 2022 and continuing for the entire year.

The levels at Lake Mead have been flirting with that 1,075-foot level going back to 2014.

Water from the Colorado, which begins in Rocky Mountain National Park, is divided up among seven states and Mexico and governed by a 1922 compact that divides the states into upper basin and lower basin regions. The upper basin states are Colorado, Utah, New Mexico and Wyoming, and water is “banked” for those states in Lake Powell.

The lower basin states — Arizona, Nevada and California — rely on the river‘s waters when it reaches Lake Mead, and the hydropower generated by Hoover Dam. Lake Mead was formed when Hoover Dam was built in the 1930s.

The lower basin states will feel the first impacts of the bureau’s Monday announcement. Arizona is expected to lose 18% of its share from the Colorado, or 512,000 acre-feet of water. According to the Associated Press, that’s about 8% of the state’s total water use.

One acre-foot of water is 326,000 gallons, or enough water to supply two families of four for a year.

Nevada will lose about 7% of its allocation, or 21,000 acre-feet of water. But it will not feel the shortage because of conservation efforts and alternative sources of water, the AP reported Monday.

California holds more senior water rights than either of the two states, so its allocation will be spared, at least for now. Mexico will lose 80,000 acre-feet, about 5% of its allocation from the Colorado.

In a statement Monday, bureau officials said the Upper Basin experienced an exceptionally dry spring in 2021, with April to July runoff into Lake Powell totaling just 26% of average, and that’s even despite near-average snowfall last winter. Total Colorado River system storage today is 40% of capacity, down from 49% at this time last year, the bureau stated.

“Given ongoing historic drought and low runoff conditions in the Colorado River Basin, downstream releases from Glen Canyon Dam and Hoover Dam will be reduced in 2022 due to declining reservoir levels. In the Lower Basin the reductions represent the first ‘shortage’ declaration, demonstrating the severity of the drought and low reservoir conditions,” the bureau said in a statement.

But 22 years of drought along the Colorado have meant other reservoirs — not just Lake Mead and Lake Powell — are also being tapped. Last month, the bureau announced it would draw down water from two reservoirs in Colorado and one in Utah, in order to keep Lake Powell, which includes the Glen Canyon Dam, and its hydropower headed to Nevada, going.

All that water will raise Lake Powell’s levels by 3 feet.

According to the Bureau of Reclamation, on Monday, Lake Mead’s elevation was 1,067.8 feet (35% of capacity). Lake Mead dropped below 1,071.6 feet on June 8, the lowest elevation on record since the lake first filled in the late 1930s.

But the entire Colorado River basin system is struggling, according to a May Bureau of Reclamation draft report on reservoir operations.

Taylor Hawes, Colorado River program director for The Nature Conservancy, said in a statement Monday the Tier 1 shortage declaration did not come as a surprise.

“The Colorado River has witnessed a steady decline in flows since 2000 that impacts communities, agriculture, industry and the health of our rivers in the region. Even as flows decreased, our demand reductions have not kept pace,” Hawes said.

“The Colorado River can be a model for resiliency and sustainability, but not without a concerted and significant effort by stakeholders in the region. ”

Becky Mitchell is director of the Colorado Water Conservation Board and Colorado’s commission for the Upper Basin states. She told Colorado Politics in a statement that “Colorado and the other Upper Basin states understand the risks and vulnerabilities we face in the Colorado River system due to severe drought and a potentially hotter and drier future.”

“We do have provisions to protect elevation levels at Lake Powell and Lake Mead, including releases from upper reservoirs into Lake Powell. We do anticipate additional releases in order to protect elevations at Lake Mead as well. As Colorado River commissioner, I am committed to working closely with our Colorado River basin neighbors in order to ensure that we can meet Colorado’s water needs in the future.”

Also on Monday, governors of 10 Western states, including Colorado, sent a request to the Biden administration to issue a drought disaster declaration for the 10 states, which would allow the states to tap into resources from the Federal Emergency Management Agency.

In their letter, the governors said, “Without substantial assistance, rural economies in our states that rely heavily on agriculture and natural resources will take years to recover from the effects of this devastating drought.”