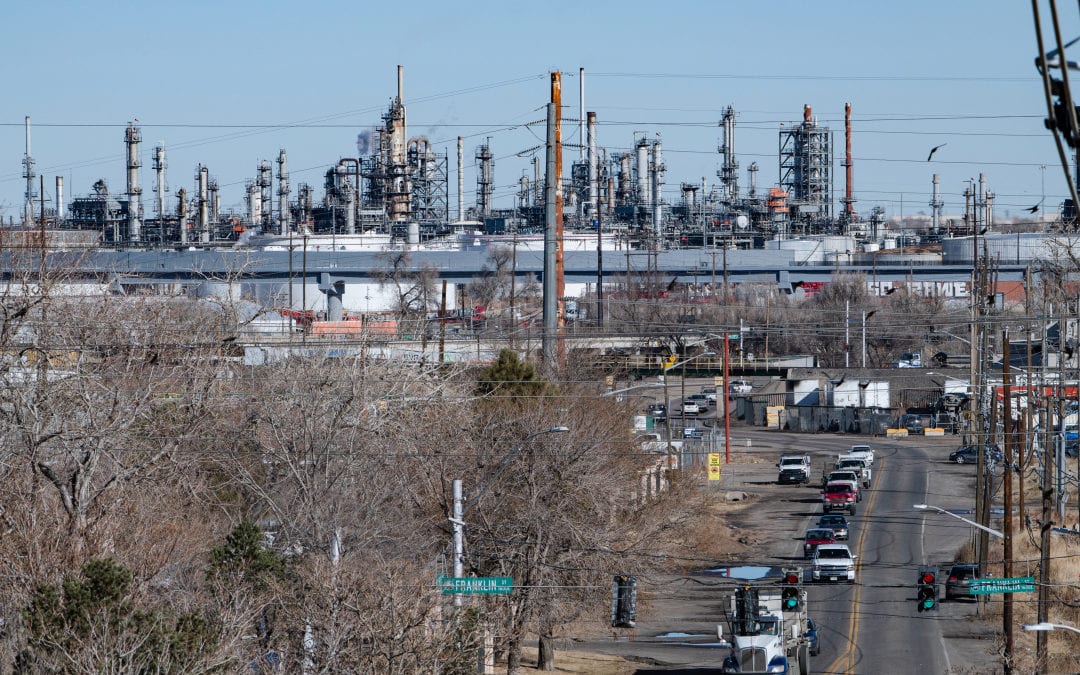 A coalition of neighbors, activists and state legislators on Wednesday unveiled a bill creating real-time air monitoring at the fence lines of major toxic polluters and a new network of dispersed community sensors, putting allies on notice they expect tangible results this year from the environmental justice movement.

The soon-to-be-introduced bill would require the Air Pollution Control Division of the state health department to set up toxic air monitors at the property lines of Suncor and two other industries, along with dispersed community monitors at places like schools and community centers, and charging the pollution emitters for the cost.

Backers say the state has let polluters get away with toxic emissions and opaque reporting for decades, while health studies prove high rates of asthma, lung disease, heart disease and other pollution-related illnesses in neighboring communities. They point out those communities are often populated with Hispanic, indigenous and other people of color, earning lower incomes that prevent them from moving.

“Our communities are often seen and used as sacrifice zones” by these large industrial polluters and the cities that permit them, said Jamie Valdez, a longtime Pueblo resident and activist. He spoke to the news conference from his cell phone camera showing his neighborhood and an aerospace plant, interstate and school in the background.

“We’re tired of it,” Valdez said, mentioning he had childhood asthma and now watches his kids and grandkids suffer from similar breathing issues. “We’re tired of seeing our children struggle to get their next breath.”

Lucy Molina, who described herself as a mom and north Denver neighbor to the Commerce City Suncor refinery, mentioned a notorious rainfall of a white, ashy substance from Suncor and said the independent monitors are the least the state can do.

“Something like this would have been really useful in December 2019, when the sky was falling on us, and we were offered a car wash,” Molina said.

Bill sponsors said that by targeting high historic emitters of benzene, hydrogen cyanide and hydrogen sulfide, the fenceline monitors will cover four facilities: Suncor; the Phillips 66 Terminal in Commerce City; the Sinclair Terminal in Henderson, and Goodrich Carbon in Pueblo.

Suncor declined to respond to a request for comment. Last week, the company, which in part processes oil from Canadian tar sands and supplies fuel to metro gas stations and DIA, announced neighbors could sign up for an alert system it would activate when non-emergency levels of emissions were visible in the neighborhood.

This year’s bill sponsors wanted to include the fence line and community monitoring in last year’s approved legislation that required the reverse-911 system, but budget and time limits caused by the pandemic forced them to take it off the table. They said they are determined to get the full slate of community-oriented laws this time.

State leaders must prove they truly care about communities of color who are proud of their neighborhoods but demand healthy change, said proposed co-sponsor Rep. Adrienne Benavidez, D-Commerce City. “Often they are overlooked and it often feels OK to do these things in our communities. We’re here to say it’s not OK. Our constituents deserve better,” she said.

Rep. Alex Valdez, a Democrat who represents the Globeville-Elyria-Swansea neighborhoods of north Denver, said outsiders often to mention their ZIP code is the most polluted in the United States. “We kept hearing arguments last year, about the cost of addressing this,” he said. “I wasn’t put here to place a value on human life. People deserve clean air, clean water and an environment that doesn’t kill them.”

The sponsors said they did not yet have a fiscal note back from legislative analysts on how much the program would cost. They said they favor the Colorado Department of Health and Environment recovering any new monitoring costs from the polluters themselves.

Data on the levels of toxic chemicals would be available to researchers and to the public, likely in some kind of internet interface, backers said. They cited California as a state that already has such monitoring in place and available to anyone who is interested.

Suncor is the target of a multi-pronged pressure campaign this year, after years of turbulent relations with surrounding neighbors and increasing scrutiny from regulators.

The refinery is in the middle of a permit renewal process with the state, and activists want the state to create stricter monitoring, establish new limits on emissions of both local toxins and greenhouse gases, and impose tougher enforcement after toxic releases.