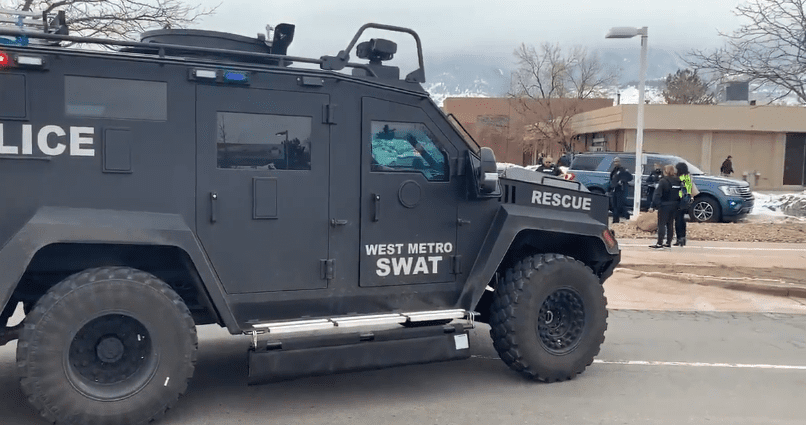 Boulder Police rushed to an active shooter call at a King Soopers on Table Mesa Drive near South Broadway. The call came in at around 2:30 p.m. One man without a shirt on was walked out of the store in handcuffs about an hour after the first call. It appears his right leg was covered in blood. He was led to an ambulance and taken away to a local hospital. The Jefferson County SWAT team is at least one Denver metro area agency helping in this situation. Lakewood and Denver police are also sending help.

#BREAKING: Shirtless man taken out of Boulder King Soopers in handcuffs and loaded into ambulance — his involvement in the reported shooting is not clear.

#BREAKING This is a a third medical helicopter, according the CBSN Denver, that has arrived in Boulder. It appears this is a @uchealth helicopter to possibly transport a third person from a reported shooting at the King Soopers. pic.twitter.com/0a9cm1TwX5

THIS is what a Colorado Congresswoman, gun extremist and conspiracy theorist is tweeting while a mass shooting tragedy unfolds in Boulder, a city in her state. #coleg https://t.co/uQA2WQcpSq

“He didn’t say shit,” said one witness. “He just came in and started shooting.” https://t.co/Eu8PRYUG9C

Heartbreaking photo from scene of King Soopers shooting in #Boulder by @photojmatthew pic.twitter.com/fqabLiFgxv

Witnesses in Boulder say the gunman in the King Soopers parking lot was holding an “AR-15 style weapon” and wearing what looked like tactical gear. #coleg https://t.co/0r5Xz4YnKD

In an @NRAILA-supported case, he ruled that the city of Boulder’s ban on commonly-owned rifles (AR-15s) and 10+ round mags was preempted by state law and STRUCK THEM DOWN. https://t.co/wmdhGG16pc