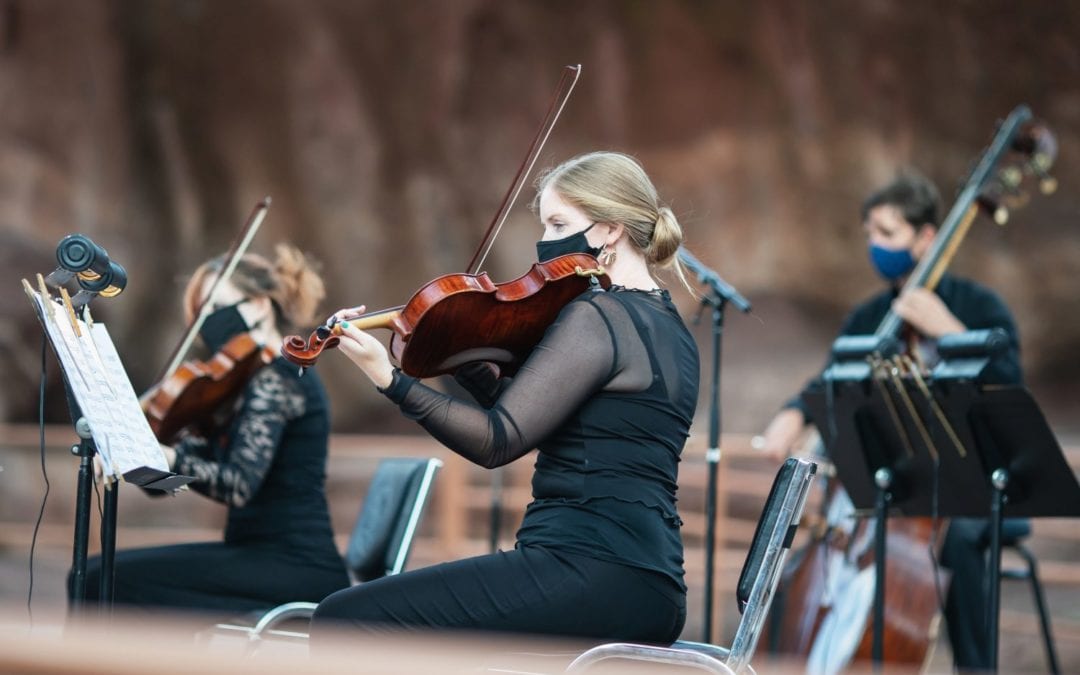 No one was surprised when Colorado Symphony programmers added 10 new shows to the Acoustic on the Rocks series last week, following a sold-out debut on July 29. The combination of fresh air, beautiful scenery and equally beautiful music is hard to beat.

But those aren’t the only classical-minded concerts taking advantage of warm weather and outdoor stages to offer safe, socially distanced music right now.

Here are a few ways to enjoy live, classical music and opera without getting too close to anything resembling a normal concert.

A week ago, Boulder Opera secured the much sought-after approval from the city of Boulder to hold its “Opera in the Park 2020” program at the Boulder Bandshell (1212 Canyon Blvd. Road). This outdoor concert has two parts: a family-friendly “Fairytales and Fantasy” portion, followed by a program exploring Zarzuela (Spanish Opera) and flamenco dancing, artistic director Dianela Acosta said via email.

While the 7 p.m. event on Saturday, Aug. 29, is free and open to the public, Boulder Opera requests that would-be attendees RSVP so they can safely limit the number of audience members. RSVP at bit.ly/3fR3z6K, and prepare your best warm-weather fairytale and folk-opera cosplay.

The grandly named “Heroes & Legends” live, outdoor concert series lives up to its name with selections from popular films and movie screenings following one of the shows.

The shows will take place at 8 p.m. on Aug. 22 at the Holiday Twin Drive-In, and at 6 p.m. Aug. 23 at Everitt Pavilion at the Gardens on Spring Creek. Fort Collins Symphony officials said they’re working closely with the CDC, state of Colorado, and Larimer County Health District protocols “to ensure that both musicians and audiences may enjoy safe and inspiring outdoor performance experiences,” according to a press statement.

Maestro Wes Kenney will lead 90 minutes of songs from titles and series such as James Bond, “Hamilton,” “Wonder Woman,” “Batman: The Dark Knight,” “Pirates of the Caribbean,” “Titanic,” “Cinema Paradiso” and “Fantasia.” Following the conclusion of the live concert on Aug. 22, the Holiday Twin Drive-In’s big screens will feature the double bills of “Goldfinger” and “GoldenEye” (screen No. 1) and “Harry Potter & the Goblet of Fire” and “Fantastic Beasts” (screen no. 2).

All shows will take place at Red Rocks Park & Amphitheatre and be led by resident conductor Christopher Dragon. The repertoire for the Aug. 19-23 performances will be announced from the stage, according to a press statement. Each program will be 75 minutes with no intermission. Visit axs.com for tickets, which are $65 each.

Colorado Public Radio’s classic station is blazing ahead with its Summerfest 2020 programming, including live and virtual concerts across the state. Most concerts are virtual (and free), but there are a handful of socially distanced, live events (including the aforementioned shows from the Colorado Symphony — a longtime CPR Classical partner) that CPR has collected on its Summerfest homepage.

See the full schedule and learn more about individual events at bit.ly/3amEAGY.