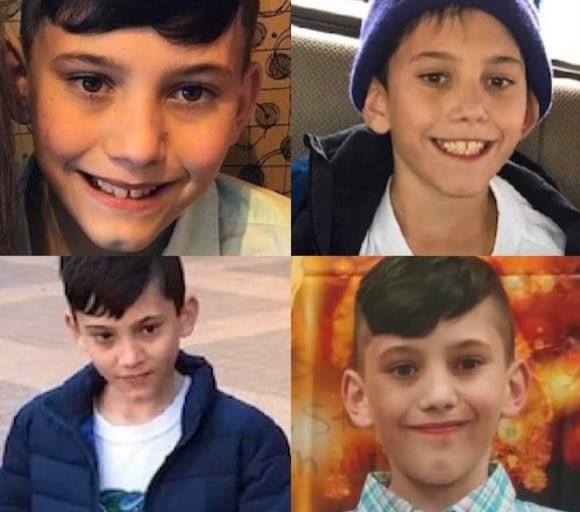 The remains of missing 11-year-old Gannon Stauch were discovered this week beneath a bridge in Florida, nearly 1,400 miles from the missing boy’s Colorado Springs home.

National Center for Missing and Exploited Children via AP

And that discovery led prosecutors in Colorado’s 4th Judicial District to file nine more charges against the boy’s stepmother, Letecia Stauch, who already was accused of killing him.

The remains were found Tuesday by a Florida Department of Transportation road crew doing work in the area around U.S. 90 and the Escambia River Bridge in Pace, Fla., said Sgt. Rich Aloy of the Santa Rosa County Sheriff’s Office in Florida. The construction crew called the sheriff’s office to report the found body.

The Santa Rosa sheriff’s office continues investigating how the body got to Florida, who brought it there and how long it had been there, Alloy said. He did not know whether Florida authorities had been advised to be on the lookout for Gannon in that state.

Pace is about 15 miles north of Pensacola in the Florida panhandle. It’s almost 1,400 miles from the boy’s home and nearly 700 miles from Myrtle Beach, S.C., where Gannon’s stepmother was arrested.

An autopsy was performed and results indicated the body belongs to Gannon, according to an El Paso County Sheriff’s Office news release. El Paso County investigators said they were informed of the body’s discovery on Wednesday. A spokesman for the District 1 Coroner’s Office in Florida could not be reached for comment.

Letecia Stauch was arrested March 2 for investigation of first-degree murder in connection with the disappearance of her stepson, Gannon Stauch. She was arrested in Myrtle Beach, S.C.

The new charges against Letecia Stauch include one count of first-degree murder after deliberation and eight counts of committing a crime of violence, according to an amended complaint filed in El Paso County District Court. The crimes of violence are sentence enhancers, which would be used to increase any punishment Stauch would receive if she is found guilty of the charges. The penalty for first-degree murder is life in prison without parole.

The crimes-of-violence charges accuse Stauch of using a gun, a knife and a blunt force instrument in the boy’s death, Michael Allen, senior deputy district attorney, said during a televised news conference. The district attorney’s office cannot elaborate on those charges, including saying whether she used all three weapons on the child, Lee Richards, the district attorney’s spokeswoman said.

A gag order is in place for investigators and attorneys involved in the case, and El Paso County Sheriff’s Office spokeswoman Jacqueline Kirby said she could not answer additional questions about the discovery of the boy’s remains.

“It helps the family to get a little more closure,” she said Friday. “But it’s still devastating news.”

“Gannon’s family has asked that there be no comment at this time as they absorb this latest news,” Coffman said.

Gannon’s parents were distraught when officials met with them Friday, Allen said.

“They were still holding out hope that Gannon would come home alive despite the charges we had filed in this case,” he said.

On March 2, Colorado law enforcement arrested Letecia Stauch in Myrtle Beach. They brought her back to Colorado and charged her with first-degree murder of a child under age 12 by a person in a position of trust, tampering with a body, tampering with evidence and child abuse resulting in death in connection with the boy’s death.

Gannon was reported missing Jan. 27 by his stepmother, who said she last saw him that afternoon as he left the family home to visit friends. Authorities and volunteers spent hundreds of hours searching for him, including focusing for several days a swath of land along the El Paso and Douglas county line.

In the days after Gannon disappeared, his parents made a video, pleading for his return. In it, Albert Stauch spoke about his son being a miracle baby, weighing only 1 pound, 6 ounces at birth.

“Even today he’s still our miracle child. He still is and he’s such a happy child and he just brings life to every party,” the father said.  “His smile, even today, is keeping us going. His infectious smile brings me joy every time I think about it.”

Gannon loved the video game character Sonic, the color blue, riding his bicycle with his sister, going outside and playing with his friends and telling corny jokes, Hiott said.

Letecia Stauch did not fight extradition to Colorado. During a court hearing, El Paso County prosecutors said more than 100 search warrants had been filed in South Carolina and Colorado.

Stauch’s arrest affidavit and other case files remain sealed in El Paso County District Court. The Denver Post has joined other media organizations to argue for the release of those files. She is scheduled to appear in court April 14.