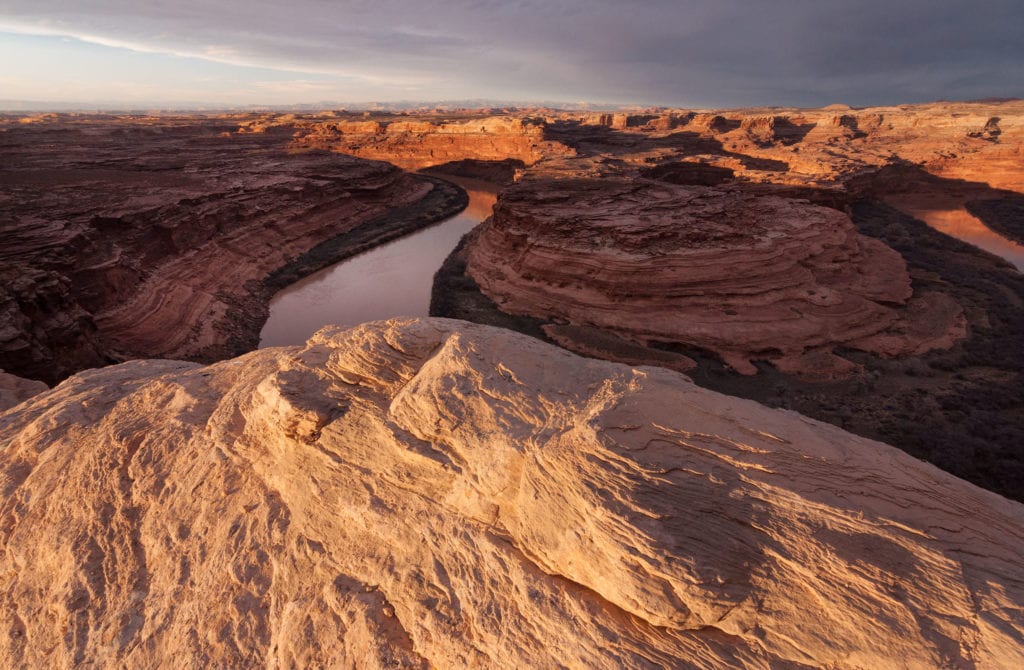 Salt Lake City, UT (March 19, 2020): The Bureau of Land Management (BLM) is preparing to offer a massive swath of treasured Utah public lands for oil and gas development.  The Washington Post reported on this new development on March 18th.

BLM has received more than 230 oil and gas lease nominations covering more than 150,000 acres of public lands, near Arches and Canyonlands National Parks, Bears Ears National Monument, and . Consistent with the agency’s actions to date, they will offer these lands for leasing and development at its September lease sale, in accordance with Trump administration directives and policies.

A map of the nominated land is available here.

The agency’s move will blanket this unmistakably Utah landscape of red rock canyons, natural arches, and colorful spires with drilling leases. Ultimately, this will replace the clean air, expansive vistas, quiet stillness, intense night skies, and sense of wildness, with the sights and sounds of industrial development, and expand fossil fuel emissions that are harmful to our climate.

Photographs of the public lands affected are available here.

This proposal comes on the heels of the BLM’s decision last month to defer offering two proposed oil and gas leases atop the renowned Slickrock mountain bike trail near Arches National Park in June. BLM deferred the  land after hearing complaints from the public including the Moab City Council, Grand County Commission, and Utah Governor Gary Herbert.

“Climate change requires immediate action. The BLM must put a halt to all new leasing of public lands if there is any chance of avoiding the most severe impacts of a changing climate,” said Landon Newell, staff attorney with the Southern Utah Wilderness Alliance. “Development of these leases will exacerbate the climate crisis, while also marring one of the nation’s most iconic redrock landscapes.”

The nominated land is within the “Moab master leasing plan” area. The Moab MLP was a study completed in 2016 that was widely hailed as one that would provide certainty to all stakeholders about where leasing might be appropriate and under what terms and conditions. Unfortunately, the current administration has weaponized that plan and is now promoting leasing in a magnitude and scope that was never intended.

The lands nominated for leasing and drilling encompass some of the wildest, most scenic, and culturally significant public lands in Utah:

“In the face of our climate crisis, the BLM is barreling in the opposite direction,” said Sharon Buccino, director of lands at the Natural Resources Defense Council. “This foolish plan would dig us into a deeper hole and sacrifice magnificent Utah lands.  It’s truly shameful, and we aim to stop it.”

“The BLM must deny these egregious requests to open oil and gas development outside of Arches—on lands double the size of the national park itself,” said Erika Pollard, Associate Director for the Southwest Region of the National Parks Conservation Association. “The BLM has the opportunity to reject this industry wish list that will only advance the climate crisis and threatens our national parks and treasured public lands, the Colorado River and the incredible outdoor experiences that millions of people come to enjoy each year.”

With climate change on the rise, locking up more of Utah’s public land for oil and gas development is short-sighted and irresponsible. In addition, Utah, like most western states, already has a surplus of BLM-managed lands that are under lease but not in development—with only forty-two percent of its total leased land currently in development. There were approximately 2.6 million acres of federal public land in Utah leased for oil and gas development (here—follow hyperlink for Table 2 Acreage in Effect) at the close of BLM’s 2018 fiscal year. At the same time, oil and gas companies had 1.1 million acres of those leased lands in production (here—follow hyperlink for Table 6 Acreage of Producing Leases).

The mission of the Southern Utah Wilderness Alliance is the preservation of the outstanding wilderness at the heart of the Colorado Plateau, and the management of these lands in their natural state for the benefit of all Americans.  SUWA has more than 14,000 members nationwide and maintains offices in Salt Lake City, Moab, and Washington, D.C.  For more information visit us at www.suwa.org or follow us on Twitter @SouthernUTWild.

The Natural Resources Defense Council (NRDC) is an international nonprofit environmental organization with more than 3 million members and online activists. Since 1970, our lawyers, scientists, and other environmental specialists have worked to protect the world’s natural resources, public health, and the environment. NRDC has offices in New York City, Washington, D.C., Los Angeles, San Francisco, Chicago, Bozeman, MT, and Beijing. Visit us at www.NRDC.org and follow us on Twitter @NRDC.​

Since 1919, the nonpartisan National Parks Conservation Association has been the leading voice in safeguarding our national parks. NPCA and its nearly 1.4 million members and supporters work together to protect and preserve our nation’s most iconic and inspirational places for future generations. For more information, visit www.npca.org.