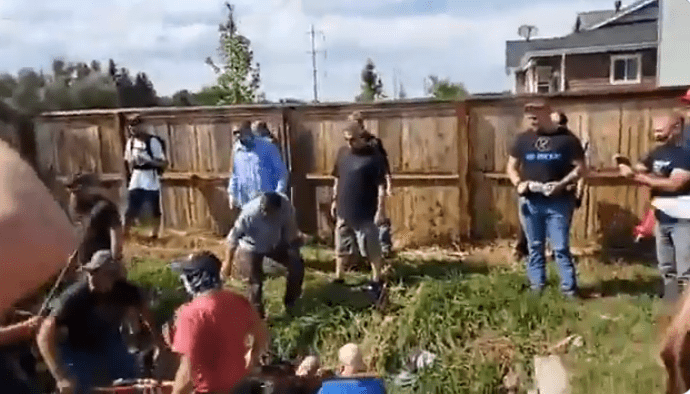 A pro-police rally for the Fort Collins Police Department garnered the attention of BLM and Antifa activists on Saturday. After the rally, one faction of the two groups is said to have attacked a disabled veteran who was in a wheelchair.  THAT did not go over well with the pro-police crowd. They backed the group out and the beat down began.

Here are the videos:

Antifa assaulted someone in a wheelchair. That’s what set off the beat down from residents. Police were on the scene to arrest the commies. pic.twitter.com/LhqHFztjV2

When ANTIFA makes a wrong turn into MAGA country. 😂 pic.twitter.com/DA5QJqdHGR

A Black Lives Matter rally had been held at Colorado State University earlier that day. Some of those rallygoers went on to the police station to start a counter-protest.

At first, it seemed to be a peaceful conversation between members of the two groups. Once the second group of anti-racism demonstrators — dressed all in black and thought to be Antifa— showed up, things escalated and turned violent.

FCPS Public Relations Manager Kate Kimble sent an email to The Collegian saying the “physical disturbances” near the station ended with three arrests and one citation.

The booking report showed two men and one woman were arrested for disorderly conduct. One of the men was also booked for allegedly possessing an illegal weapon, while another was hit with a resisting arrest charge.

A high school student who went to the rally and filmed the incident was upset that the pro-police crowd was allowed to do this and no cops were there. She didn’t think there was a reason for them beating up on the BLM and Antifa folks. You can clearly see in the first video that the police did arrive.

The entire incident “ruined” a young boy’s birthday party, according to one of the pro-police crowd.

There’s a reason – even if they hadn’t accosted a veteran in a wheelchair, they had no business being in a residential area. And frankly it’s about time people started standing together.

As we have said before: you will be made to care. And if you don’t care yet…you will. If BLM and Antifa troublemakers show up in your neighborhood, you can either cower or fight. Your choice.

“This is all it takes! Just run the scum out, even if it takes some head thumpin! They do way worse than that, so give it right back to them. If not, they will keep doing what they do.” @C_Pugh15

If you haven’t checked out and liked our  page, please go  and do so.  You can also follow us on Twitter at .  Please be sure to check out our MeWe page  and check us out at ProAmerica Only .

If you appreciate independent conservative reports like this, please go  and support us on  and get your conservative pro-Trump gear .

And while you’re at it, be sure to check out our friends at , the Internet’s conservative front-page founded by ex-military!