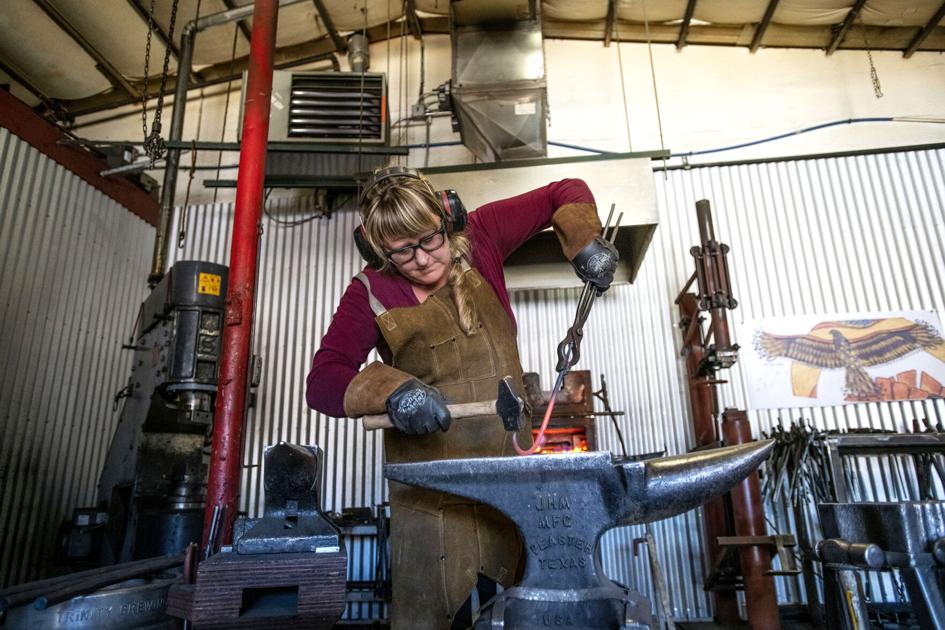 Your image of a blacksmith is likely antiquated.

It probably involves a man pounding a red-hot piece of iron on an anvil.

But if you conjured up a statuesque blonde completing the same task, welcome to the 21st century and the studio of Jodie Bliss, Monument blacksmith and metal fabricator extraordinaire.

A tour of Bliss Studio and Gallery reveals a busy, in-demand blacksmith who’ll celebrate her 10th anniversary at the shop this fall.

Jodie Bliss poses for a portrait at her studio, Bliss Studio and Gallery in Monument. Bliss is an artist blacksmith and metal fabricator. She works primarily in hand- forged metals, creating everything from public sculptures to gates, fences and home decor.

Bliss is a native of Monument, where her mother owned High Country Feed and Tack and taught Bliss how to drive a forklift and “boss boys around.”

“I didn’t have to break a stereotype in my head of women being unable to do anything,” the Cheyenne Mountain High School graduate said. “I had a strong mother.”

With that kind of influence, it’s no surprise Bliss is part of an elite club — the 1% of blacksmiths who are female, by her estimation. She knows of only two others in Colorado.

There are, naturally, pros and cons to being a woman in her profession. A drawback is the occasional need to have to prove yourself when people assume you don’t know what you’re doing, she said.

She sees a lot more benefits, however, including the novelty aspect — people often remark on the marketability of such a niche. But she thinks more in terms of her aesthetic.

“When I compare my designs to other people’s, they have a more feminine touch, which makes them stand out from a lot of the other stuff. It’s not heavy and masculine.”

Some see her work as downright “goddesslike.” Those are the words Shanti Toll uses to describe her new sculpture, “Spirit of Manitou,” which was recently installed in front of Econo Lodge at 107 Manitou Ave., after Manitou Springs Urban Renewal Authority put out a nationwide call for artists.

Jodie Bliss forges metal by heating and shaping pieces at her studio, Bliss Studio and Gallery in Monument. Bliss is an artist blacksmith and metal fabricator.

Bliss’ winning piece is a curvy female figure holding aloft a cog from the old Manitou railroad. She also featured a dozen vignettes of scenes from Manitou life, including the Incline and Carnivale celebration.

“I love it. It reminds me of the diversified nature of Manitou Springs,” said Toll, a member of the Manitou Springs Art Council and curator/manager of the Spirit of Manitou Legacy Art Project. “She works really well with whomever is getting a piece of art.”

It’s high noon on a Tuesday in Bliss’ Second Street complex, which truly is a complex, with its blacksmith and metal fabrication shops and former gallery that’s now a workspace. Most of her seven employees are scattered throughout, hunched over and working on eye-catching, large-scale sculptures and commissioned pieces. There’s her muse of water and muse of earth sculptures, both measuring 9 feet tall and headed to Regional Transportation District stations for the city of Thornton.

There also are some geometric pieces on the floor. Those are going to Garden of the Gods Club and Resort, where they’ll stand sentinel in the roundabouts near the resort. Some of her other pieces adorn traffic circles in the Flying Horse development. And then there are the ornate fire tables, one of which is decorated with a peacock.

Altogether, Bliss estimates about 15 of her public art pieces are placed throughout Colorado Springs and Manitou, including two at University Village Colorado shopping center. Her large-scale sculptures also can be found around the state and in a couple of towns in Kansas.

Jodie Bliss welds at her studio, Bliss Studio and Gallery in Monument. “Her art is very artistic, detailed,” says one of her fans.

That number grows exponentially when it comes to private collections. Last year, Bliss and her team made more than 100 large and small pieces for Colorado Springs clients: elaborate gates, railings, doors, furniture and other custom metal work.

“Her art is very artistic, detailed,” said Herman Tiemens, one of Bliss’ clients and a local arts philanthropist. “It’s metal, which makes it heavy, but it almost has a dainty flair. It looks soft even though the materials she’s working with are not.”

Bliss’ personal favorite is probably the majestic, 11-foot “Path to Vitality,” commissioned by Eagle Pointe Recreation Center in Commerce City. Made from hand-forged mild steel, the piece took about 400 hours and is based on one of the nine ancient Greek muses intended to inspire people. The evocative ladies influence much of Bliss’ work; she’s made watercolors of them that hang in a precise row, high on a wall, so the women always seem to be gazing out over whatever’s going on below.

If the blacksmith had her druthers, her time would be devoted to creations involving those muses.

“It’s a form that can express a lot of different ideas and emotions,” she said. “I’ve had people say, ‘Can you do a male figure?’ I’m not opposed to it, but every time I try to draw the male figures they just don’t have as much life.”

After high school, Bliss attended Western State College in Gunnison, where she started working in metal by making jewelry. She began visiting her uncle’s woodshop on the weekends, and an industrial metal worker who had a shop next door invited her to come dig through the scrap pile and use his welder. The welding bug bit hard, and jewelry-making fell by the wayside.

After earning her bachelor’s of fine art and a bachelor’s in creative writing, she got a master’s at Academy of Art University in San Francisco, where she tinkered with ceramics and silk painting and did lots of experimenting, all of which incorporated metal. It wasn’t until she moved back to Colorado, however, that she took her first blacksmith class. The craft, and the way it allowed her to create organic shapes, was enchanting.

After a relationship ended, she needed a place to land, one that could accommodate her accumulating pile of tools. So her parents offered her their building in Monument where her mom’s feed store had been.

For five years, her life proved robotic: make as many metal sculptures as possible, pack them in the van, drive around the country, set up tents at art fairs, go home, repeat. By her early 30s, that life was becoming a bit less romantic. At the same time, she was participating in the Front Range Open Studio tour, which invited art lovers inside artists’ places of work. During one event, her artistic life was rerouted. Three separate visitors said they liked her art but wondered if perhaps she also could make them a gate.

“I booked out six months of work doing artistic architectural work,” she said. “It allowed me to get off the road for six months, which was a break I needed. I thought, ‘I’ll do this and go back to doing art shows.’ But once I started doing this custom metal work, it just kept coming.”

In 10 years, she hopes her career will be devoted mostly to custom, large-scale pieces. But to build that public art resume, she has to start small, she said, with $2,000 sculptures, and work her way up.

The timing feels right, though the timing of her life has always seemed auspicious. Things come to her when she’s ready.

“I don’t know how exactly that’s working, if my energy is flowing with the universe,” she said.

“But when I look at the major milestones, my life does feel very serendipitous.”