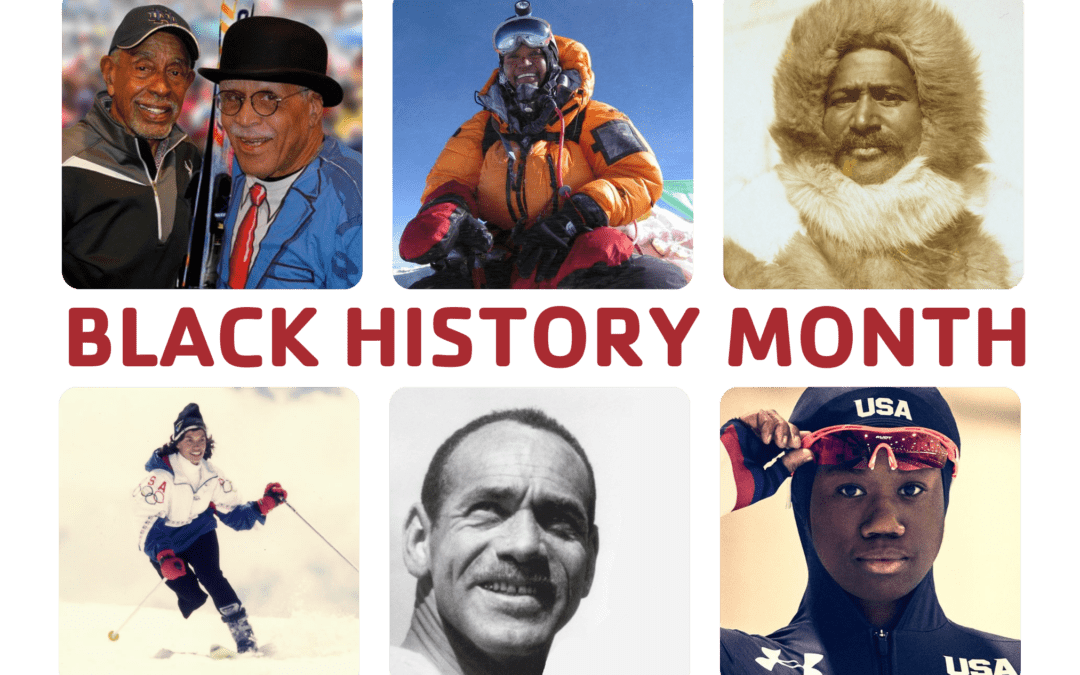 February is Black History Month! We celebrated by highlighting Black mountaineers, winter athletes and leaders in the outdoors in the Boone Family Mountain Center at the Estes Park Center, in program areas at Snow Mountain Ranch and through our social media channels.

Did you know, Black History Month has roots associated with the Y? In 1915, after attending a celebration in honor of the 50th anniversary of emancipation, Carter Woodson convened a small gathering at the Wabash Avenue YMCA in Chicago and formed the Association for the Study of Negro Life and History (ASNLH). The Association created Negro History and Literature Week, renamed Negro Achievement Week, later Negro History Week and eventually Black History Month.

Matthew Henson, Robert Peary and four Inuit hunters became the first recorded humans to set foot on the North Pole in 1908. However, the trip likely wouldn’t have been possible without Henson who trained even the most experienced of Peary’s recruits. Henson was the first person to reach the North Pole.

Matthew Henson built the sledges used on their expeditions and was fluent in the Inuit language, enabling him to build rapport with the native people of the region.

Erin Jackson qualified for the 2018 Winter Olympics after learning how to speed skate just four months prior. She is the first Black woman to be on the United States long-track team.

Bonnie St. John graduated from Harvard, became a Rhodes Scholar and went on to Oxford University before working in the White House as an economic official.

Andre Horton began his skiing career on Nordic skis, but switched to Alpine skiing by age seven. Horton was selected to compete in the U.S. Alpine National Championships three years in a row.

In the summer of 1903, Captain Charles Young became the first African-American national park Superintendent when he and his troops were tasked to manage and maintain Sequoia National Park.

Young led a number of road construction projects and during his tenure, the parks reported no poaching violations.

Over 18 miles of trail were improved during his tenure.

Sophia Danenberg is the first known Black woman in the world and the first known African-American of any gender to summit Mount Everest. She has also climbed three more of the Seven Summits including Aconcagua, Denali and Kilimanjaro.

Danenberg climbed Everest without a traditional guide. She had assistance from her Sherpa, but chose her own route and pace and carried much of the gear.

Sibusiso Vilane was the first known Black man to summit Mount Everest. He has summited Everest two times, the first in 2003 and again in 2005.

Vilane is also one of 61 people in the world to have achieved the Explorers Grand Slam which entails climbing the Seven Summits and trekking to the North and South Poles.

Ralph Green is the first African-American man to make the United States Paralympic Alpine Skiing National Team. At 16, Green was shot and had his left leg amputated at the hip. One year later, he was introduced to skiing. Skiing the slopes with a program in Winter Park, Colorado, Green said, “I’m skiing until I’m the best.”