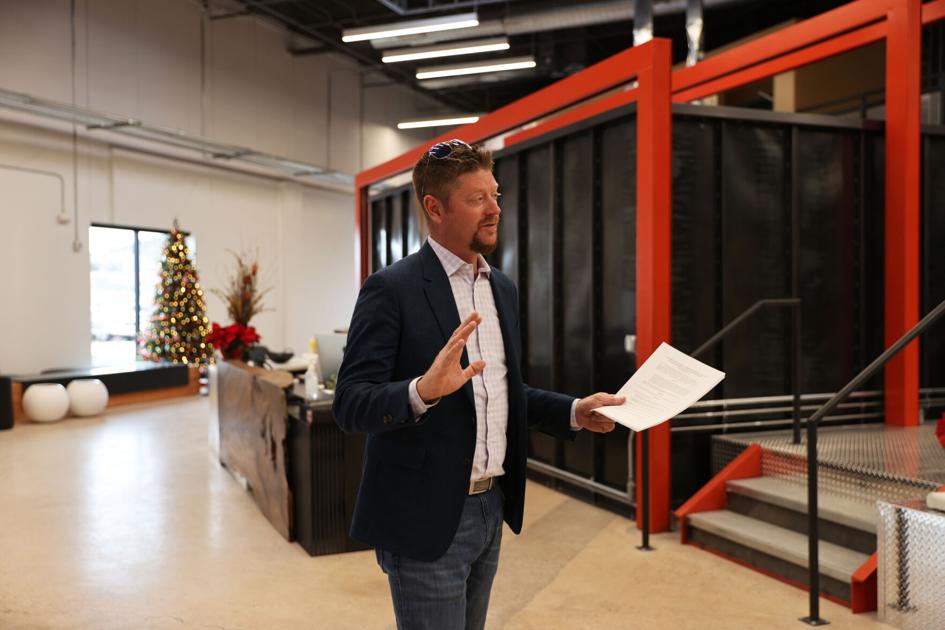 Few if any structures have had as varied uses as one on Mark Dabling Boulevard on the north side of Colorado Springs, which has been a missile component manufacturing plant, a source of family fun, a church and more.

Now the building is returning to its manufacturing roots; Colorado Springs-based Jaxon Engineering & Maintenance, which manufactures metal enclosures designed to protect equipment and personnel from electromagnetic pulses, has moved into about a third of the former Texas Instruments plant, which once made components for anti-radar missiles. The new location is nearly triple Jaxon’s previous space in the Briargate area and includes plenty of room for a major expansion that is planned over the next year.

TI closed the missile plant at 5825 Mark Dabling Blvd. in 1992, which has since been the home of the Mr. Biggs entertainment center, several call centers, an athletic training complex and a church. Jaxon is spending about $6 million remodeling the plant to install a massive overhead crane used in its manufacturing process, build walls for offices and conference rooms and construct a mezzanine level. The building also houses a restaurant call center called Synq3 Restaurant Solutions, a gym called D-1 Training, Trace Christian Church and an advertising agency called Wicked Think Marketing.

“Our biggest challenge right now is sourcing good talent. I can’t just put out a job description and find the people who can do this specialized type of EMP work,” Jaxon CEO Scott White said. “The main way we attract people is through our culture. We offer a compelling benefits package, pay competitive wages (that average $80,000 a year), but we also want to have a space where it is fun for people to work.” That includes an indoor putting green, beer taps in the lobby and a patio for company barbecues.

Jaxon plans to nearly double its 80-person workforce to 150 this year to keep up with surging demand for its enclosures, which can cost more than $1 million and weigh more than 22 tons, White said. The company has about 80 customers, mostly with the Air Force and Navy for work in Alaska, Hawaii, Greenland and Europe, to produce the enclosures that are designed shield people and equipment from EMPs caused by high-altitude blasts from nuclear weapons.

White hopes to grow the company from $25 million in revenue this past year to at least double that this next year and $100 million within five years, when Jaxon would employ about 300 people. The company is owned by its senior management and has never sought outside investment, growing instead by winning Department of Defense contracts and occasionally borrowing money from banks.

Scott White and his father, Randy White, started Jaxon, named for Scott White’s son, Jackson, in 2009 after spending most of their careers building EMP enclosures while working for defense giant L-3, now part of L3Harris. Jaxon had nine employees at the beginning, all of which remain with the company, and generated $7 million in revenue in its first year, mostly from early contracts with the Air Force.

“We started the company because the Air Force was awarding a lot of these contracts to small businesses and saw it as a good opportunity,” Scott White said. “We started out outsourcing all of the support areas — financing and accounting, human resources, information technology — as well as some of the engineering and construction, particularly electricians and welders. We eventually brought all of that in house because our (profit) margins go through the floor if we subcontract” much of the work.

Jaxon was so successful early the company ended up in a major patent infringement lawsuit with L3, which drained millions in cash out of the company before the dispute was settled out of court in 2015. The litigation nearly killed Jaxon, throttling its growth for years and forcing the company’s founders to work without pay for months and other managers to take salary cuts.

“My father and I took no pay for almost six months and we cut our own salaries for several years. A lot of folks took salary cuts and put their own money into the company to help us survive,” Scott White said. Two years after the suit was settled, the same top managers that took pay cuts bought out Randy when he retired and all still remain with Jaxon.

Much of Jaxon’s growth has happened in the past two years as the company has brought its administrative and support operations in-house and launched a construction division to replace subcontractors to build the company’s enclosures, Scott White said. Jaxon also won contracts from the U.S. Army Corps of Engineers valued at $14 million in 2016 for maintenance and $9 million in 2017 to build enclosures.

“We are the only comprehensive supplier of EMP enclosures in the world; we design, build, test and maintain them,” Scott White said. “We offer a bonus program where employees can get up to 12 weeks of pay in bonuses, depending on our profits, and we also have advancement opportunities that few others can match,” such as a way for electricians and welders to become engineers.

Jaxon donates 1% of its annual profits to charities ranging from the Springs Rescue Mission to Operation Homefront and TESSA, the local domestic violence prevention agency and shelter operator.