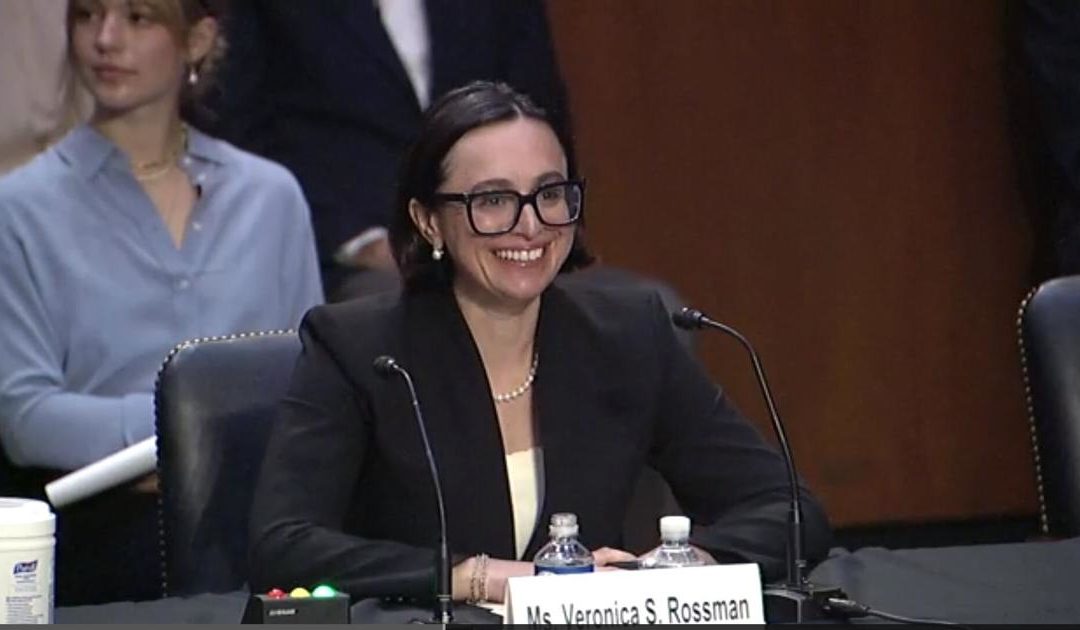 President Joe Biden’s nominee to a seat on the federal appeals court based in Colorado will receive a vote before the full U.S. Senate after a committee on Thursday narrowly advanced her nomination.

Veronica S. Rossman of Denver received a vote of 12-10 from the U.S. Senate Committee on the Judiciary, with Republican U.S. Sen. Lindsey Graham of South Carolina joining all 11 Democratic members in favor of her nomination to the U.S. Court of Appeals for the 10th Circuit.

Rossman, 49, is senior counsel for the Office of the Federal Public Defender for the Districts of Colorado and Wyoming. If confirmed, she would be the only public defender on the 12-member 10th Circuit. The court hears appeals from Colorado, Utah, Kansas, Oklahoma, New Mexico and Wyoming.

Since her confirmation hearing on June 9, Judiciary Committee members submitted a battery of written questions to Rossman. While some sought to clarify her work history or her understanding of pivotal cases, several questions from Republican senators attempted to push her into weighing in on hot-button cultural issues, including critical race theory, immigration policy and gender identity.

“Given the information in the public domain, do you believe that Brett Kavanaugh sexually assaulted Christine Blasey Ford?” asked U.S. Sen. Ted Cruz, R-Texas. Kavanaugh, now a U.S. Supreme Court justice, belligerently insisted during his 2018 confirmation hearings that he had not attempted to assault Ford when both were minors.

“As a judicial nominee, it would be inappropriate for me to comment on any extra-judicial matter concerning any member of the Supreme Court,” Rossman responded.

Republicans were most concerned about pinning down Rossman’s judicial philosophy. Given that the U.S. Supreme Court agrees to hear a relatively small number of cases each term, the circuit courts are the final stop for most appeals. For the 12-month period ending March 31, 2020, the 10th Circuit resolved 296 cases after oral argument and 927 cases on written briefs alone.

“I do not have a specific judicial philosophy, meaning I do not ascribe to any single school of interpretive methodology,” Rossman wrote to senators. “In every case, I will treat all litigants respectfully and impartially; I will carefully consider the issue(s) presented and give due regard to the parties’ legal arguments.”

The top Republican on the committee, U.S. Sen. Chuck Grassley of Iowa, indicated his dissatisfaction with that answer prior to the Thursday vote, saying of Biden’s circuit nominees, “I doubt that they don’t have judicial philosophies.”

Rossman also came under scrutiny for her work handling criminal appeals for the public defender’s office. U.S. Sen. Dick Durbin, D-Ill., the chair of the committee, asked Rossman to explain her experience handling civil cases, which comprise the majority of circuit courts’ workload.

Rossman indicated she had worked “exclusively” on civil matters for half of her career, including as a law clerk to a Nevada state Supreme Court justice, a staff attorney for the San Francisco-based Ninth Circuit, and as an employee of two law firms.

During the COVID-19 pandemic, Rossman oversaw the public defender’s handling of compassionate release cases. With 2018 legislation, Congress allowed prisoners to seek sentence reductions from courts for extraordinary and compelling reasons, which could include a risk of death from coronavirus infection.

At her confirmation hearing, U.S. Sen. Josh Hawley, R-Mo., quizzed Rossman in detail about her advocacy for Merrill Ross Moon, who sought release after his pretrial detention disrupted his cancer treatments. Moon would subsequently plead guilty to possessing rifles, thousands of rounds of ammunition, machine guns and silencers — the latter of which had no serial numbers — even though he was a felon.

Hawley, in his written questions, asked Rossman to further explain why she sought release for Moon. Rossman responded that Moon was an immunocompromised cancer patient whose chemotherapy and radiation stopped when he was taken into custody.

Other questions that senators posed to Rossman included:

•   “What role should empathy play in interpreting the law?” (Grassley and U.S. Sen. Mike Lee, R-Utah)

Response: “Empathy should play no role in interpreting the law. A judge must be impartial and abide by the rule of law, without regard to any external influences or personal opinions.”

Response: “I knew that working for the FPD would allow me to serve the public and defend our fundamental rights while practicing trial and appellate litigation at the highest level in complex federal cases.”

•   “Please name the Supreme Court Justice or Justices appointed since January 20, 1953 whose jurisprudence you admire the most.” (Sasse)

Response: “I particularly admire both Justices [Neil] Gorsuch and [Elena] Kagan because they share a quality that I believe is essential for appellate judges: an ability to write clear, reasoned judicial decisions, in plain language, which then make the Supreme Court’s opinions accessible to the litigants, the public, and lower courts.”