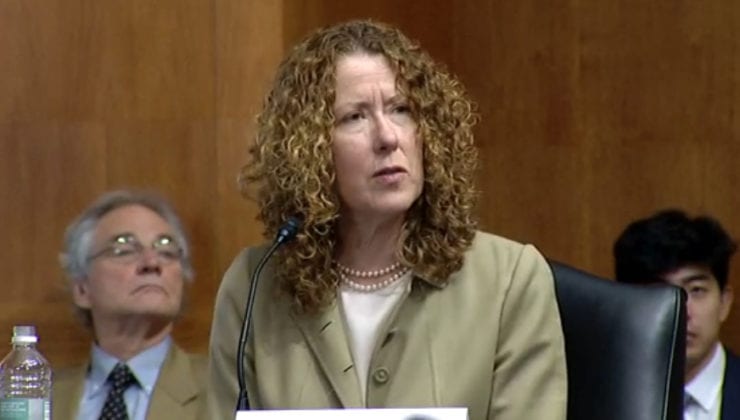 Tracy Stone-Manning was too radical for the Obama administration, but it doesn’t look like anyone or any policy can be too extreme in this batty era of Biden.

Obama’s first Bureau of Land Management director, Bob Abbey, says Stone-Manning should be disqualified to lead the agency because of her activities with ecoterrorists in a tree-spiking spree.

Western Republicans called for Biden to yank her nomination now pending before the U.S. Senate.

But despite her past and controversial support for China-style population control measures, President Biden is standing by his choice of an eco-warrior  to manage and regulate public lands.

“Given the Biden Administration’s supposed concern for domestic terrorism, this nomination is particularly puzzling and worrisome,” says a letter to Manchin from 15 lawmakers.

“Tree-spiking is a form of ecoterrorism, considered by the FBI at one point as one of its highest domestic terrorism priorities. Someone who has participated in such activities clearly does not have the judgment to serve in such an important position,” the letter also said.

The lawmakers also said Stone-Manning opposing the relocation of BLM’s headquarters to Colorado and her “overtly partisan past are also of concern” and argued that the president’s nominee has been openly hostile to Republican members of Congress in her past positions, which the lawmakers noted were the “very Republican members” that represent the public lands she would oversee if confirmed.

“We believe that she is not fit to lead an agency that is integral to the economic and environmental viability of our districts,” the lawmakers wrote of Stone-Manning.

Here’s the letter Stone-Manning sent to the Forest Service in 1989 warning them to abandon a timber sale after her cohorts pounded 500 pounds of spikes into trees.

She later testified against two of the tree spikers in exchange for immunity from prosecution. As the letter she admits to writing indicates, she was with them, and says “we uploaded a total of five hundred pounds of spikes measuring 8 to 10 inches in length.”

That Biden would even consider an ecoterrorist like this to lead the Bureau of Land Management shows the extremes to which the Democrat Party is making a hard left turn into anarchy.