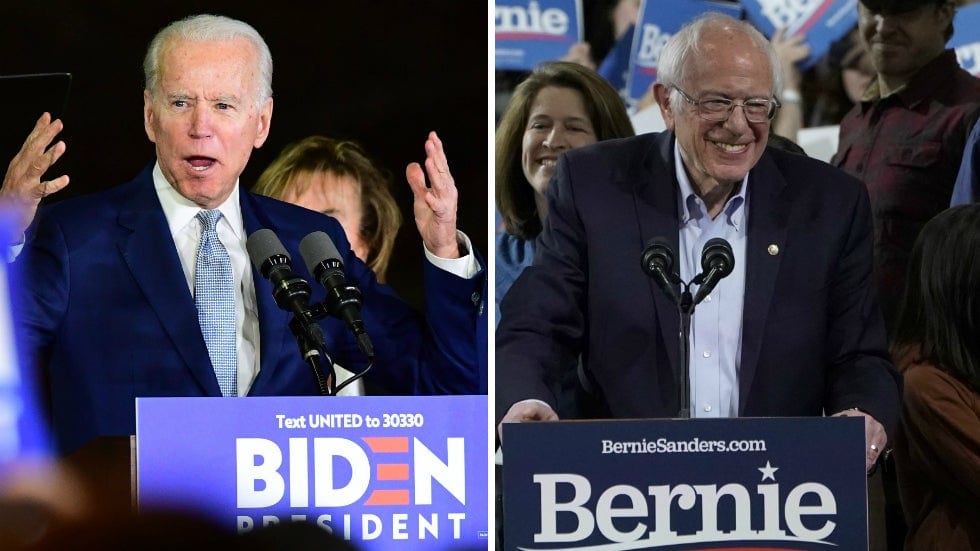 He was also competing hard with Sanders for Maine, another state where he had been seen as a big underdog.

Biden won blowout victories in Alabama and the swing state of Virginia and was building big leads in North Carolina, Tennessee and Arkansas, three more states where he was declared the winner.

Sanders was projected as the winner of four states, including the biggest prize of the night in California, and he won big in his home state of Vermont. Sanders also looked to be the runaway winner in Colorado and Utah.

Sanders is depending on a big win in California to make up a delegate gap to Biden that was lost in the South. California holds 415 delegates. The final delegate count may not be known for some time, as results from California could take days or weeks to tally.

Texas, with 228 delegates at stake, was the other big prize. Sanders leads Biden in Texas with just less than half the vote counted, but the race looks like it is headed for a close finish that could leave Sanders and Biden splitting the large number of delegates.

Sanders entered Super Tuesday as the front-runner, and the biggest primary day of the year had been seen as a pivotal point that could propel him to a huge delegate lead.

Instead, it is beginning to look like a pivotal moment for Biden that, if he is fortunate in California and Texas, could end with him leading Sanders in delegates or at least have him not that far behind.

“It’s a good night, and it seems to be getting even better,” a jubilant Biden declared at a rally in Los Angeles. “They don’t call it Super Tuesday for nothing.”

Sanders gave an energetic and optimistic speech from his home state of Vermont, where he said the decision voters face is whether to support him or the political establishment.

“Tonight, I can tell you with absolute confidence, we’re going to win the Democratic nomination, and we’re going to defeat the most dangerous president in the history of this country,” Sanders said.

It was another disappointing night for Warren, who will likely face calls from the left to drop out of the race so progressives can rally around Sanders. It’s anyone’s guess, however, where her support will go.

Bloomberg will also face enormous pressure to end his campaign. A source close to the Bloomberg campaign said advisers would meet Wednesday to talk about the way forward.

Biden’s strong night was a direct blow to Bloomberg, who entered the race over fears that Biden was a weak front-runner who might lose to Sanders. But Bloomberg suffered a near-total collapse and will not walk away with many delegates.

In Virginia and North Carolina, Biden thundered to double-digit victories, despite being outspent by tens of millions of dollars and running a bare-bones operation. Bloomberg blanketed both states with advertisements, offices and staff but may walk away empty-handed.

Biden can now credibly make the case that he’s the only viable alternative to Sanders and potentially the overall front-runner in the race for the nomination.

That’s due in large part to Biden’s success among black voters, who helped him run up the score and land big delegate hauls in Virginia, North Carolina and Alabama.

“If this continues throughout this campaign … [Biden] is going to be very successful and be our nominee, and I really deeply feel he’ll be the next president of the United States,” Rep. James Clyburn (D-S.C.) said on MSNBC.

Clyburn’s endorsement of Biden ahead of the South Carolina primary is widely viewed as a turning point in the race, propelling Biden to a landslide victory in the Palmetto State and galvanizing moderate Democrats around his campaign.

Klobuchar’s exit and endorsement of Biden likely led to his victory in her home state.

In addition to winning a strong majority of black voters on Tuesday, Biden also performed well among suburban voters, who combined to fuel his 30-point romp in Virginia.

Super Tuesday appears to have damaged some of Sanders’s core arguments about why he’s best positioned to win the Democratic primary.

Sanders has argued that he does best when turnout is highest. But turnout in Virginia was off the charts, and Biden was still able to win in a rout.

Early exit polls indicate that young people did not turn out the way Sanders had hoped, with some showing that 18 to 29 year olds only made up about 13 percent of the electorate.

And while Sanders has greatly expanded his appeal to nonwhite voters since 2016, he is not running competitively with Biden among black voters.

Sanders does the best among Latino voters, which could help him in Texas and California, where he’ll need to pick up delegates in order to stay competitive with Biden.