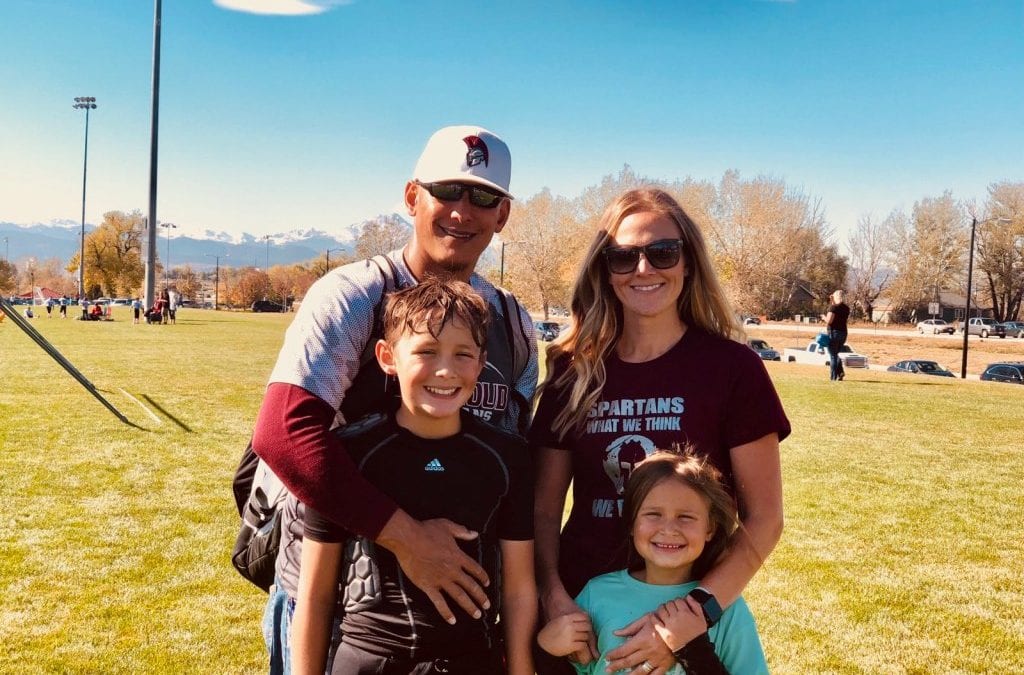 For the past two weeks, Berthoud resident Mark Gomes has been fighting just to breathe, on a ventilator in intensive care at the hospital with coronavirus.

His wife, Brittany, and children, 13-year-old Tate and 8-year-old Gia, were quarantined at home, unable to visit Mark, living in an intensified state of not knowing, worrying and, of course, hoping for the best.

“It’s probably the worst thing we’ve ever experienced,” said Brittany. “The worst thing you can ever imagine is someone you love gets sick and you can’t be there in any capacity.”

And then on Monday, she got the FaceTime call she had been hoping for. It was Mark, letting her know that he had been taken off the ventilator. She heard his voice for the first time in weeks.

“He just said, ‘I love you,’ and he asked how the kids are,” she said Tuesday. “They were able to see him and talk to him. It was pretty awesome. It was a big win for us and nothing we’ll forget any time soon.”

COVID-19 is a very contagious and deadly disease that has spread quickly throughout the world, the United States, Colorado and even Larimer County, which reported 101 cases and five deaths Tuesday. The virus is so serious that health officials have essentially shut down the country, closing businesses and schools and ordering people to stay home as much as possible to slow the spread.

The local cases — a fraction of what health officials think is the true total because of limited tests available — have hit all age groups from the 20s to the 100s and all communities.

The danger is real and it’s here. That is what Brittany wants people to realize, that they, too, could be affected and that they need to follow health orders and stay home.

“This can happen to you,” she said. “Your risk is no less or no greater than mine. If you love your family and your friends, you do this for them … If you’re out doing stuff, you could bring it home to them.”

Mark Gomes is a 41-year-old man who has lived with asthma his entire life. He works in banking, and he has coached his son’s football and baseball teams.

On March 9, he came home from work feeling ill, as if he had a cold. He had a temperature and decided to stay home from work for a few days. He began to feel muscle aches and lethargic and on Friday, March 13, went to see the doctor.

His doctor swabbed for the flu, which came back negative, and asked Mark if he had traveled or knew anyone who was sick. He hadn’t. Doctors thought he had a common respiratory virus and sent him home to rest and stay hydrated.

Over the weekend, he became worse instead of better. Monday, March 16, he went to the doctor again, where he was sent for lung X-rays and tested for coronavirus. That day, the doctor referred him to the hospital and Mark, who was hypoxic and needing oxygen, was admitted into the emergency room at Banner Fort Collins Medical Center.

Two days later, on March 18, he was put onto a ventilator and transferred to North Colorado Medical Center in Greeley, where he remains recovering from what has been confirmed as COVID-19.

“He’s as sick as he could have gotten,” Brittany said. “He’s in ICU and was intubated for almost two weeks. He was as sick as he can be. He got to the point where it was as bad as it could get.”

Now, he still has a many hurdles ahead toward recovery, but is “doing awesome.”

Brittany, who got mildly ill, and their son and daughter, who were not ill at all, feel better that they can at least talk to Mark several times a day. He is focusing on recovery, and Brittany is focusing on the family, holding them together as they recover from this experience.

A Berthoud community member started an online fundraiser to help the Gomes family. The initial goal was to bring in $7,500. As of Tuesday, donations reached $31,667. This is a huge relief to Brittany who is not working and expects to not be able to work for a while as she cares for Mark and the family.

She said she was humbled and blown away by the outpouring of support and love from friends, family members and the entire community of Berthoud.

Brittany said they still do not know how Mark came into contact with the coronavirus.

“That’s not something we know,” she said. “He was going to work and living life and doing everything as normal.”

She praised the care he has gotten at the Banner Health hospitals, the doctors, nurses and other providers who were there physically at a time she was not allowed in the hospital; all area hospitals have prevented visitors during the global pandemic to slow the spread.

“The hospital has been nothing short of amazing,” she said. “I can’t imagine working in the situation they are working in … They go to work every day and care for people who they don’t even know while putting their health and families at risk. There’s nothing more selfless.”

She worries about hospitals reaching a point where they have too many patients to care for, where they would be faced with devastating decisions.

She urges people to stay home to slow the pandemic before it reaches that stage.

“You owe it to the people you love and care about to do your part,” she said. “You can’t guarantee you’re not part of the problem if you’re not staying home.”