Behind the scenes at downtown nonprofit arts complex in Colorado Springs 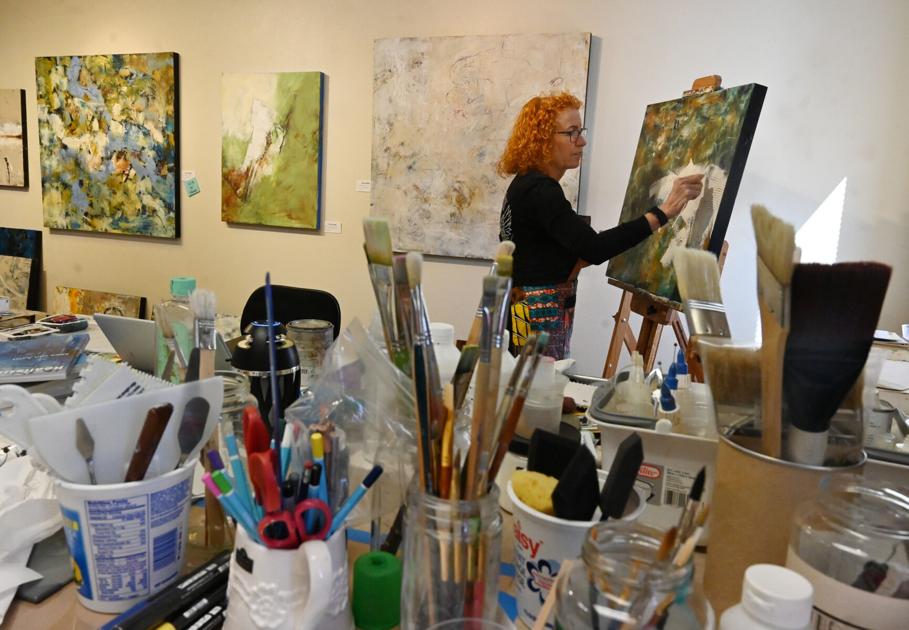 Cottonwood Center for the Arts was a different animal when Jon Khoury arrived in Colorado Springs from New York City in 2012.

There were 14 artists renting studios in the large building east of downtown. The parking lot was always empty. The buildings around it were vacant. There was no activity. But then Cottonwood blossomed. KKTV moved in down the street, as did Catalyst Campus. And along came 333 Eco Apartments and new bars and restaurants.

And for the last seven years the nonprofit arts complex has housed 100 creators tucked into their cozy, rented studios where they paint, build, sketch, write and dream up ways to express their creativity. There’s a tattoo artist who offers astrology readings, a hair salon, photography studios and a nonprofit dedicated to helping survivors of sexual assault. Spoken word poetry group Hear Here Poetry has a studio, as does Springs Spirituality Metaphysical Shop.

“We feel like so much of what we’ve done has brought the city a little bit east, which we’re proud of,” says Khoury, Cottonwood’s executive director and CEO.

Khoury, a New Yorker who graduated from Colorado College, is passionate about supporting artists. Before he left New York, he represented 260 musicians, each of whom was making a full-time living.

“A writer, dancer, poet, painter, photographer — the expressions of how they tell their story is widely, wildly different,” Khoury says. “But in the end we’re all telling themes that are universal themes: human rights, equality, love, compassion, the list can go forever. The spectrum of things that get done in here — anything you can name happens in this building.”

And he also feels strongly about being an arts organization that gives back to its community.

“We’re always in this balancing act of how do we do it,” Khoury says. “Each year that’s passed it’s become easier to be the ones who can give, rather than an organization that’s just looking to take and say you need to support us right now. If we’re doing what we need to do for the community, we will get everything we need and more.”

What does a day in the life at Cottonwood look like? Here’s a snapshot of one Friday in February.

10 a.m.: It’s a cold morning. A thin layer of snow has appeared on streets and grass overnight, but it’s not enough to dampen the inner workings of Cottonwood. The Reception Gallery, with its colorful, eclectic displays of jewelry and art from the building’s inhabitants, is bustling. Artists come and go. After signing a year-long lease, they cram their paints, canvases, frames and tools into the small, medium and large spaces that run $250 to $1,500 monthly. One renter uses a closet as a studio.

And if for any reason somebody needs to leave, the lease can be broken with a month’s notice. But he can even work with a week’s notice — there’s a waiting list of 300 who’d love to move in.

“It’s a built-in family you inherit the day you come through the door,” says Khoury.

10:30 a.m.: Fountain photographer Rachel Cubi-Riley’s new exhibit, “Will the U.S. Ever Be Us,” is up in the first-floor Nancy Stage Robinson Gallery and the adjoining Spittler Gallery. Cubi-Riley, who also has a studio on the second floor, photographed the Colorado Springs and Denver Black Lives Matter protests last year before traveling to photograph protests and the aftermath in Tulsa, Okla., Louisville, Ky., and Washington, D.C. An opening reception during February’s First Friday Downtown attracted hundreds of visitors.

11:15 a.m.: Mixed-media artist Tish Lacy Reed stands at her work table preparing an oil and cold wax mixture, a substance much like cake icing. She’s got an abstract of some sort on her mind, though she isn’t quite sure what turn it will take. She’s been with Cottonwood for almost 30 years and also teaches here and at Kreuser Gallery. She’s at her easel much like a regular job, from 10 a.m.-3 p.m. five days a week.

“I love Cottonwood,” she says. “During the pandemic it was such a solace to come in here and work.”

11:25 a.m.: Down the hall and around the corner is painter Dennis Palsgrove. One glance at the walls and it’s easy to see what inspires the artist, who left a career in civil engineering to paint full time: mountains, particularly Pikes Peak. Today he’s working on a watercolor of Garden of the Gods. His passion for mountains runs in his genes — his grandparents homesteaded on Pikes Peak.

The Colorado Springs native has been at Cottonwood for close to 11 years: “It’s good to be around other working artists for inspiration. They hold you accountable.”

11:33 a.m.: Landscape painter Ben Bires is using a recent photo of North Cheyenne Cañon Park as inspiration for the painting perched on his easel. These days he’s trying to work a little looser and get away from the excessive detail of hyperrealism. Bires also is a teacher at Cottonwood: “Some people think they can’t do something creative, so it’s nice to get them in the buildings and studios.”

12:38 p.m.: On the second floor Laura “Gates” Brown is revamping her two rooms. The decades-long former graphic designer and art director says she’s “too prolific,” so some of the mixed-media works and other pieces need to go home with her.

“I do a little bit of everything,” he says. “I’m a Jack of all trades, a compulsive creator.”

1:45 p.m.: The sign inside Springs Spirituality Metaphysical Shop says psychic readers are available. Inside the space, filled with crystals, sage, cauldrons, tarot decks and scrying mirrors, shop owners Jazz Ramirez and Natalie Evans are having lunch. Need a reading in Spanish or to clear your home or business of unwanted energy? Ramirez is your go-to. Need some reiki, a type of energy work? Evans can help you out. They also teach tarot classes and can assist you with past life readings, contacting the deceased or shadow readings.

“You have to be ready to get called out and not get offended,” says Evans about the latter. “It’s gentle healing, but you face your own demons.”

2:20 p.m.: Pottery has only gained momentum over the years, says Khoury. Fifteen potters in the building have studio space. A kiln is down the hall from the studio and Khoury says a new outdoor gas kiln is coming soon. It will be the only one in the city with its high temperatures.

Today two potters are working in the shared pottery studio. Kathy Peregoy comes in about three times a week. She’s finished trimming a plate and is about to throw two cylinders that will become planters for succulents. Sarah Garrett is making mugs with images of root veggies on the front. She also proudly displays a Nigerian udu drum, which she plans to give to her friends at Yoga Studio Satya, where they do sound healing.

2:24 p.m: Next door is painter Kris Rutledge. It’s Friday, so he’s fresh off sketching a live nude model in Cottonwood’s David H. Lord Theater. A model comes every Friday morning so artists can practice drawing. Sketchings of the model are scattered across the floor, while a canvas is in progress on his easel. In the back portion of his studio is a fort built by one of his two young children.

“I try to convey spirituality in paintings and that is art,” says Rutledge, who calls himself a “self-proclaimed monk” on his website, and decided to pursue art full time last year. “What do you feel that can’t be spoken?”

2:30 p.m.: Khoury, Director of Curation Jess Preble and Director of Education Annie Pieper are in good spirits as they sit at the front desk. Khoury’s back from Plaza of the Rockies where one of Palsgrove’s landscapes, “Touch the Peak,” has sold under the auspices of Cottonwood’s curation and staging program. Preble manages the rotating collections of artwork in businesses, public spaces and private homes in the Springs and other locations, such as Gold Hill Mesa, Sotheby’s and Berkshire Hathaway.

The curation program was honored by the Cultural Office of the Pikes Peak Region and the Colorado Springs Chamber of Commerce & EDC at the 2019 Business and Arts Lunch. Currently the roster features 80 artists. An application is available online at cottonwoodcenterforthearts.com.

“The concept of the starving artist needs to go away,” says Preble, a longtime oil painter.

2:45 p.m.: Pieper’s always on task. She’s responsible for recruiting instructors, doing marketing and filling Cottonwood’s classes. The center offers an array of foundational art classes, as well as contemporary and new media, such as digital art. She’s also creating programming for those who previously haven’t had access, such as veterans and refugee foster kids.

“We’re trying to give more access to people who think they can’t be an artist,” says Pieper, an oil painter who also creates glass pieces. “We try to give people the confidence to take a risk.”

3 p.m.: Everything is an art to Lisa Midknight, even parking a car, she says. She’s been an artist since she was a kid: “It was the only subject that felt safe because there’s no correct or wrong answer,” she says as she moves around her eclectic space that includes Zelda, a mannequin covered with papier mâché newspaper articles from the 1940s.

The Springs native moved to New York, graduated from Sarah Lawrence College and eventually made her way back home. Her tidbits of artistic wisdom fly off the cuff over the course of a conversation: “Weeds are just as beautiful as flowers.” “Real artists have no concept of time. If you’re lost in art, there’s no time until it’s time.” “I’m not sure if the work is done,” about a piece. “It’s not bright enough. But sometimes I have a habit of ruining things.”

3:20 p.m.: A client gets their mane glorified at Wildflower Salon. “There are a lot of people who make a living here,” says Khoury.

3:30 p.m.: New Jersey woodworker Greg Bodnar points out his gorgeous handmade bench in the hallway. He doesn’t use power tools, which doesn’t appear to be a detriment. Inside his studio he’s working on an abstract-looking tree while watching “The Family Guy” on his laptop: “Furniture is a hard market to get into,” he says.

3:45 p.m.: The nonprofit Finding Our Voices uses its studio mostly for storage. The organization helps survivors of sexual assault heal and thrive by providing creative activities and events. Every April since 2008, the organization has sponsored an exhibit featuring the artistic expressions of those survivors and their allies. Since 2014, those exhibits have been held at Cottonwood.

4 p.m.: Photographer Lawrence Paul wants women to feel beautiful in whatever body they inhabit, and he does it through boudoir photos.

“You don’t need to take off 10 extra pounds,” he says. “I recommend doing a session now and seeing how beautiful you look instead of listening to what people say.”