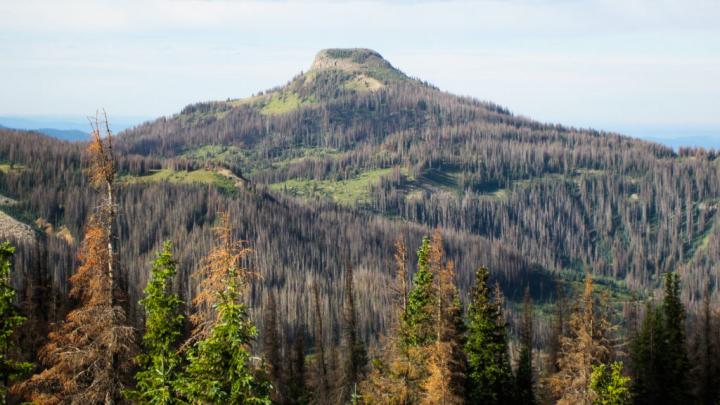 It’s no secret. Colorado’s forests have had a tough time in recent years. While natural disturbances such as insect outbreaks and wildfires occurred historically and maintained forest health over time, multiple, simultaneous insect disturbances in the greater region over the past two decades have led to rapid changes in the state’s forests.

The study, “Effects of Bark Beetle Outbreaks on Forest Landscape Pattern in the Southern Rocky Mountains, U.S.A.,” analyzed Landsat satellite imagery between 1997-2019 to quantify how outbreaks of three different insect species have impacted forests across high-elevation forests in Colorado, southern Wyoming, and northern New Mexico. The research team found that while these collective beetle outbreaks impacted around 40 percent of the area studied, the effects of these outbreak varied due to differences in forest structures and species composition across the region.

“In contrast to research that has examined the heterogeneous effects of wildfire on trees, there hasn’t been much work on the landscape-level variation in bark beetle effects on forests, particularly across broad areas,” said Sarah Hart, co-author and assistant professor in the Forest and Rangeland Stewardship department. “Heterogeneity plays an important role in how these forests will look in the future, where surviving trees will regenerate the forest, and what potential there is for future outbreaks.”

Their results indicate that most forest stands affected by insects still have mature trees that can be sources for reestablishing seeds and conditions for the next generation of trees to grow. Areas with tree mortality greater than 90 percent were relatively small and isolated. Unlike severe wildfires that can kill all trees in its path, trees typically survive bark beetle outbreaks, facilitating forest recovery in upcoming decades.

Widespread outbreaks of three important bark beetle species have occurred in Colorado’s forests since the turn of the century: mountain pine beetle, spruce beetle, and the western balsam beetle (that affects various fir tree species). These bark beetles primarily target large trees with reduced defenses due to lower precipitation amounts and higher temperature trends since the turn of the century.

This research team combined satellite imagery capable of identifying small groups of dead trees with a decade of extensive field data from nearly 250 plots to develop presence and severity maps for tree mortality caused by bark beetle attacks. Having this data combination gave the research team detailed information about how many trees have died in particular places, and helped to identify what may still be causing the death of individual trees.

“These maps give us unique insight into the effects of recent insect outbreaks because they span a large area but also show a lot of detail, and we are confident that they are showing us how many trees are dying because technicians counted trees on the ground,” Kyle Rodman, lead author and post-doctoral researcher at the University of Wisconsin-Madison said.

The maps the team produced indicate that areas most impacted by bark beetles are concentrated in northern and southwestern Colorado due to higher concentrations of old lodgepole pine and spruce forests which were then infested by mountain pine beetle and spruce beetle, respectively. Western balsam beetle impacts were also widespread across the region, but these beetles tended to kill fewer trees in any single location.

“Satellite data is a crucial bridge that allows us to take detailed information from individual places and extend this localized knowledge to large areas,” Rodman said. “In using these maps, we can see how the forest has changed over the past 20 years during each of these outbreaks.”

Fortunately, much of the 25,000 square kilometer study area showed low to moderate levels of tree mortality, with high tree mortality being contained in small and isolated patches averaging only about nine city blocks in overall size.

“People tend to notice what has changed, rather than what has stayed the same,” Rodman said. “These forests have changed a lot, but I am hopeful. It will just take a little while for them to recover, but many of these beetle-killed forests are likely to recover within a few decades.”