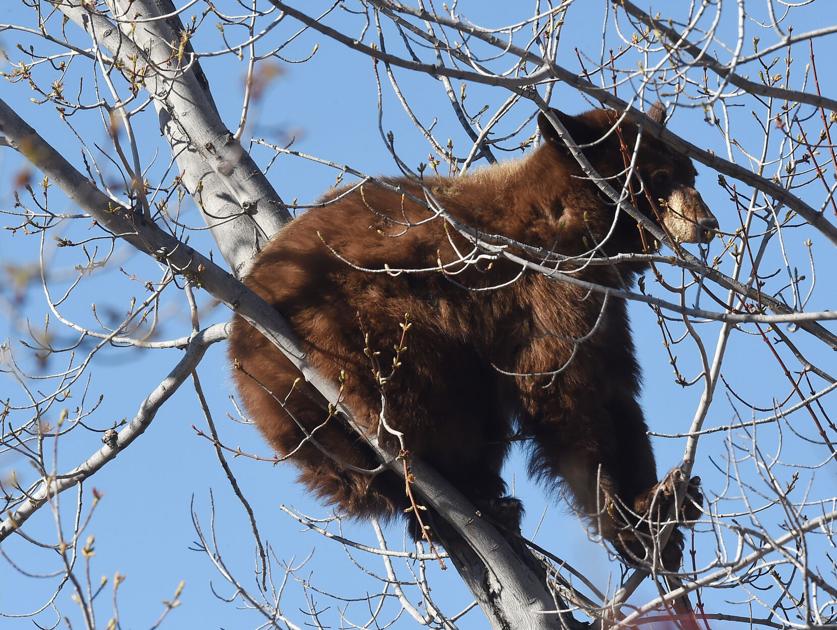 A black bear that climbed up a tree near a busy thoroughfare near downtown Colorado Springs drew a crowd of onlookers and media outlets Thursday morning. Colorado Parks and Wildlife agents responded to calls about the animal after workers from a nearby building spotted it around 7 a.m. at the intersection of Pikes Peak and Colorado Avenues just east of downtown. The bear was safely tranquilized by CPW and will be relocated in the wild. (Video by Skyler Ballard)

A black bear that climbed a tree near a busy thoroughfare near downtown Colorado Springs drew a crowd of onlookers Thursday morning before it was tranquilized and hauled away by wildlife agents.

Colorado Parks and Wildlife agents responded to calls about the animal after workers from a nearby building spotted it around 7 a.m. at  Pikes Peak and Colorado Avenues just east of downtown.

Wildlife officials say onlookers and television crews who gathered to watch the bear frightened and endangered it.

“We hate having to deal with the bears like this,” said Bill Vogrin, a spokesman for Colorado Parks and Wildlife. “This kind of behavior puts them at risk.”

Climbing trees during the heat of the day is a natural habit for bears and not an unusual sight, Vogrin said. The Colorado Springs area reported 734 bear sightings in 2020, he added.

But Aaron Berscheid, a district wildlife manager, said the spot was not a good habitat for the bear because there was sparse food  as well as heavy car and foot traffic.

“It’s just not a good, safe place for a bear,” Berscheid said.

The attention the bear drew and the complaint calls Colorado Parks and Wildlife received meant the bear needed to be relocated.

That entails sedating the animal and caging it for a ride to the forest.

The bear now has a rap sheet with wildlife officials.

“Our policy is, if we have to lay hands on a bear we have to give a strike,” Vogrin said. “And the bear hasn’t done anything wrong. People have.”

Vogrin said giving a bear a strike means the animal is tagged. If a tagged bear must be handled a second time, it is euthanized.

“Ninety percent of the time it’s the humans’ activity that give the bear a strike,” Vogrin said.

Bears spooked by humans will hide out by climbing trees like the animal that blundered downtown, Vogrin said.

“Hopefully with the way that we relocate him and everything, hopefully this will be the last time we see him and he’ll just live his wild bear life out in the wild,” Berscheid said.

Skyler Ballard contributed to this report.