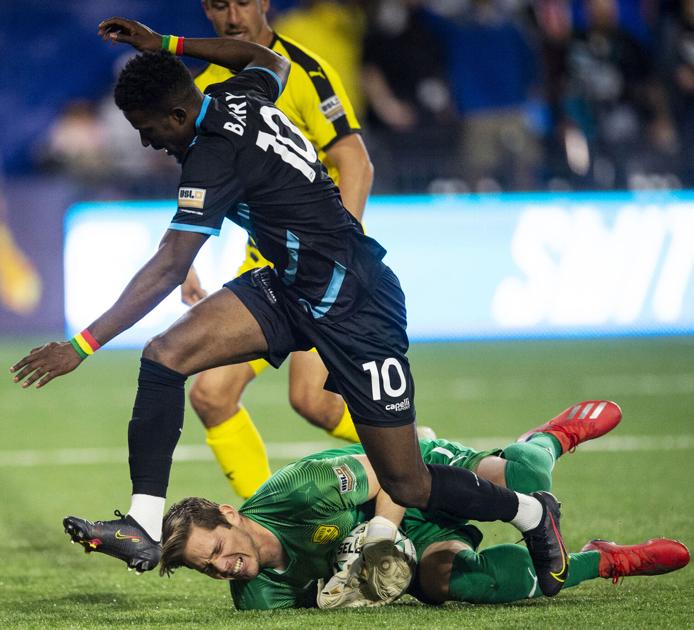 Hadji Barry signed with the Colorado Springs Switchbacks FC in January to be the team’s striker and provide firepower on offense.

He has not disappointed.

With five goals in five games, Barry ranks fourth in the USL Championship, one behind three players tied with six. Barry’s knack for finding the net has been a huge boost for a club struggling to score.

“Right now, it’s Hadji’s time to shine,” said forward Deshane Beckford. “We want to all get on the scoresheet and we’re all doing what we can to make that happen. Our time will come.”

The only game Barry — a native of Guinea — has been held without a goal was in the opener at San Antonio FC, a 3-0 loss May 1.

“I feel like it’s only a matter of time before these other guys start scoring,” Barry said. “Once we do we’ll be hard to stop. I’m taking the load right now, but sooner or later they’re going to start hitting.”

Barry scored a pair of goals in a 4-0 victory over Sporting Kansas City II, and the lone goal in three other games against New Mexico United, San Antonio and El Paso.

The Switchbacks’ other two goals this season are by forward Austin Dewing (a Colorado Springs native no longer with the team after being summoned to pilot training by the Air Force) and forward Michee Ngalina.

“We know where each player is positioned on the field,” said Ngalina.

Switchbacks coach Brendan Burke insists his club will start finding the net on a regular basis.

“We expect (balls) to be flying in soon and when they do we’ll be winning games,” he said. “The important part is we’ve had anywhere from 50-to-60% of the ball everywhere we’ve gone. Even in a place like El Paso where they were the most dominant team in the league in possession last year. We mashed them in that category. Now we need to finish plays.”

The Switchbacks (1-2-2) host a Tacoma Defiance team Wednesday that is also struggling to score. Tacoma (2-2-1) has just five goals from five players in five games.

Tacoma (seven points) is fifth among eight teams in the Pacific Division of the Western Conference. The Switchbacks (five points) are sixth among seven teams in the Mountain Division.

Wednesday will mark the return of center back Michael Edwards, who drew a suspension against San Antonio and had to sit out the El Paso match.

Switchbacks midfielder Jose Torres will miss his third consecutive game. He is dealing with a foot injury, but Burke said he anticipates Torres returning to game action sooner than later.

The Rapids signed Yapi to a Homegrown Player contract in March 2021, making him the youngest player to sign with the MLS club. He signed with the Switchbacks in July and made his pro debut at 15.

Yapi is the second-youngest player on the Switchbacks ahead of Yaya Toure, who turned 17 on Saturday.