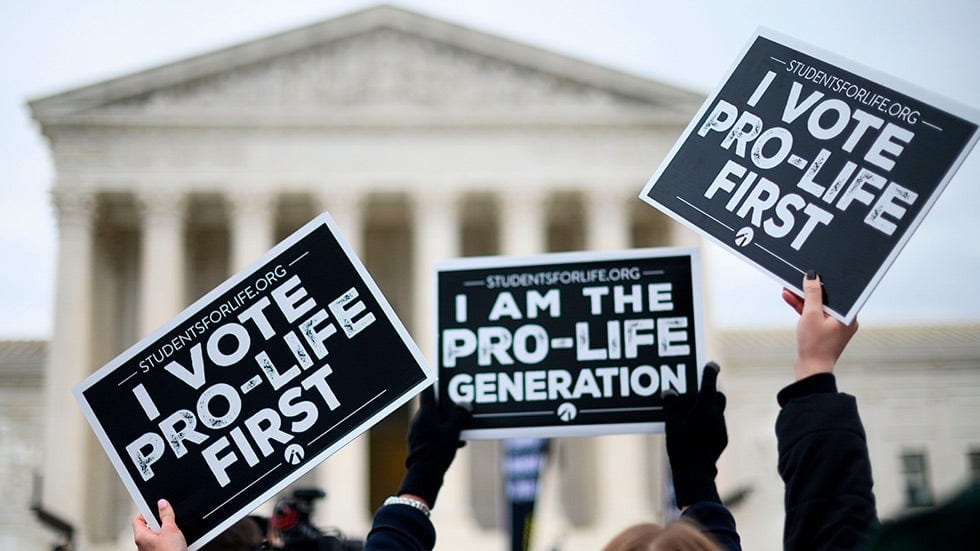 But abortion is literally on the ballot in two states where voters will decide whether to support initiatives that could restrict access to the procedure.

Colorado will decide whether abortion should be banned after 22 weeks of pregnancy, while Louisiana will vote on an amendment that states there is no right to the procedure in the state’s constitution.

Both initiatives come as anti-abortion groups try to expand their reach in the states in the hopes that one day the Supreme Court will overturn or weaken Roe v. Wade, the landmark ruling that established a right to an abortion before fetal viability — when a fetus can survive outside the womb.

The ruling did not determine viability, leaving states to set their own standards.

Colorado is one of only eight states, including Washington, D.C., that does not have gestational limits on abortion, making it a target for anti-abortion groups.

“This is one of the darkest secrets in the state,” said Giuliana Day of the Coalition for Women and Children, an issue committee that was formed to support the initiative.

“The majority of people have no idea this is happening.”

If the initiative is approved, it would be illegal for physicians to perform abortions if the gestational age of a fetus is 22 weeks or older, unless it is “immediately required to save the life of a pregnant woman.”

But abortion-rights supporters argue very few abortions are performed after 21 weeks of pregnancy, and the decision should be made between a woman and her doctor.

In Colorado in 2019, 1.9 percent of abortions were performed after 21 weeks of pregnancy, according to a state report.

People might get abortions later in pregnancy because it’s medically necessary, there are fetal abnormalities, someone didn’t know they were pregnant, couldn’t get time off of work, or live in states that make accessing abortion difficult, said Elizabeth Nash, the interim associate director of state issues at Guttmacher Institute, a sexual and reproductive health and rights research organization.

“The way life is structured and how complicated it is means sometimes people need abortion later in pregnancy,” Nash said.

If the initiative passes, she said, it would impact not only people living in Colorado but others who might travel from other states where abortion has been restricted.

For Coloradans seeking abortions later in pregnancy, the next closest clinic is in New Mexico.

Gestational limits on abortions are usually passed by state legislatures and not through ballot initiatives.

In Colorado, abortion opponents sought to get the question on the ballot after similar bills banning abortion after 22 weeks failed to gain momentum in the Democratic-controlled state legislature.

“It’s much better to take it to the people,” Day said.

“There has been a lot of mobilization all over the state. People understand this is very reasonable.”

Proposition 115 needs the support of 51 percent of voters to pass. Polling on the issue is limited, but one released earlier this month by a Colorado news outlet found it has the support of 42 percent of those surveyed, with 45 percent in opposition.

Colorado voters have rejected all of the abortion-related ballot questions that have come before them since 2000, according to Ballotpedia.

Proponents of Proposition 115 are also being outraised significantly by Abortion Access for All, an issue committee that was formed to oppose the initiative and is being funded by Planned Parenthood, the American Civil Liberties Union and others.

In Louisiana, voters are poised to vote on a question that would amend the state constitution to state that it doesn’t “protect a right to abortion or require the funding of abortion.”

Amendment 1 is supported by Gov. John Bel Edwards (D), the only “pro-life” Democratic governor in the U.S.

Supporters of the amendment argue it is needed to ensure anti-abortion laws passed by the state legislature “cannot be undermined by state judges.”

“For too long, judges have forced legal abortion on America, taking the issue out of the hands of citizens and our legislators,” Louisiana Right to Life, a supporter of the amendment, writes on its website.

If the amendment it approved, it would become more difficult for abortion-rights supporters to sue under the state’s constitution, Nash said.

“If a state passes an abortion ban and someone were to sue, they would sue under the federal or state constitution,” said Nash.

“What abortion opponents are trying to do is remove any kind of constitutional protection, whether state or federal, so abortion restrictions or bans would go into effect.”

She noted that after Alabama approved its ballot initiative in 2018, Gov. Kay Ivey

“It sort of shows the path that could be taken,” she said.