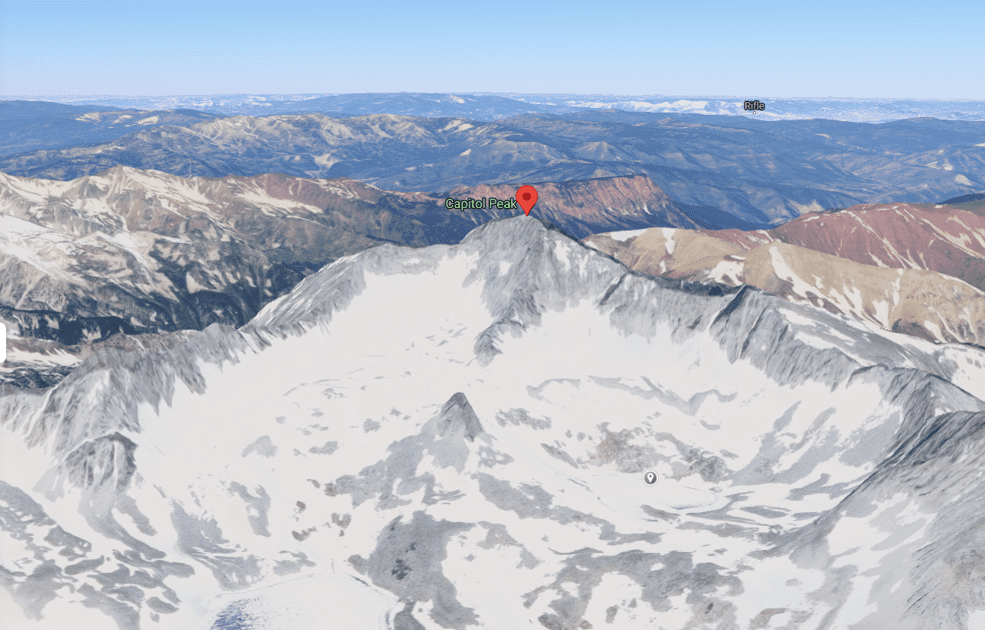 While four Mountain Rescue Aspen team members were working to recover the body of a fallen climber on Capitol Peak on Wednesday, rocks came tumbling down, resulting in serious injury and putting the risks that search and rescue teams regularly face on display.

After multiple days of unsuccessful search and rescue attempts, the body of the fallen 32-year-old climber was spotted from the air in treacherous terrain some 500 feet below the infamous ‘Knife Edge’ ridge of Capitol Peak. The climber appeared to be deceased, victim to serious injuries sustained from a big fall. This spotting prompted the search and rescue effort to send a recovery team into the field to further assess the situation, with crews set to leave from Pierre Lakes, located below the east side of the ridge.

This image shows a 3-D rendering of Capitol Peak, with the summit marked by the red icon. Below the summit (and slightly to the right), find a grey pin. This pin is on the Pierre Lakes location, which is where the search and rescue teams started their ascent from. The Knife Edge ridge can be seen above this, aptly named. Image Credit: @2021 Google Maps.

Prior to the start of their climb toward the fallen climber, crew members noticed recreational climbers high above, on the same ridge the climber they were trying to reach had presumably fallen from. While climbers regularly frequent this ridge, the recreational climbers’ position would pose a threat to the search and rescue team below. It’s considered to be very risky to be downslope from another climber on loose terrain where rocks can be kicked down-mountain.

Because of this risk, the search and rescue party requested that a helicopter that had been aiding in the effort attempt to signal to the recreational climbers that they needed to move off the ridge, though this communication was unsuccessful. According to the pilot, the climbers on the ridge seemed to not understand the hand signals from the cockpit, or at least they didn’t react accordingly.

Crew members started their climb up the mountain at about 10:30 AM without this potential situation being resolved.

Near the beginning of their upslope push to the fallen climber, rescuers heard someone yell “rocks” from above. Moments later, an “avalanche of rocks” came crashing down the mountainside toward the search and rescue team. While one member of the team was able to dodge the rocks, the other three were struck.

The most serious injuries were sustained by a crew member that was struck by a rock and knocked twenty feet through the air in what has been described as a “rag doll” or “somersault” motion. Another team member sustained moderate injuries to the lower part of their body and the third sustained minor injuries to an extremity.

After the rocks stopped crashing, crew members were able to assess the situation and provide immediate medical care to the most severely injured member of their party. The helicopter returned to the scene to extract the members from their location. Two of the team members were treated at Aspen Valley Hospital, while the third, most seriously injured party was flown to a hospital in the Denver metro area for emergency surgery. Additional details about specific injuries have not been made available at this time.

All rescue team members were out of the field by 4 PM, less than six hours after the had left the Pierre Lakes area behind.

Following the unsuccessful and dangerous mission, a new plan is being formulated to reach the fallen climber, though this could take days or weeks.

Not only does this situation show the extreme risk that search and rescue teams face in Colorado, typically on a volunteer basis, it also shows the importance of being aware as a climber on the mountain.

In this case, it is believed that the rockfall that hit the search and rescue team was triggered accidentally by those the helicopter pilot had attempted to communicate with. It’s unclear why this communication was unsuccessful.

Perhaps the climbers couldn’t see or decipher the signals the pilot was making. Perhaps a brain fog resulting from the strenuous route and the elevation limited their ability to comprehend the situation. Perhaps the climbers were committed to summiting the peak at any cost, not wanting to turn back with their end goal in sight.

The reason the communication failed is unknown, but it serves as a reminder to keep a high level of awareness while on the mountain, regardless. If something seems odd, it’s worth considering why that might be the case. If a helicopter is buzzing climbers, there’s probably a reason for that.

Out of respect for the fallen climber and their family, the deceased climber’s name has been left out of this piece. While this climber is obviously the reason search crews were in the field, now is not the time for criticism and online shaming. Tragedy followed something going wrong on a ridge that has claimed many lives before and will likely claim lives in the future.

Mountain climbing is a sport with inherent risks and best practices for safety should always be followed while in the mountains. While making decisions in the mountains, it’s important to remember how the risks you take may impact those that come to help should something go wrong.

Having talked with many search and rescue crew members throughout my time writing with OutThere Colorado, the common mindset seems to be “we do what we do, so you can do what you love.” Search and rescue teams don’t seem to want stories like this to discourage people from enjoying Colorado’s mountains, but they do want them to serve as a reminder to be safe, to make smart decisions, and to always conduct adequate research prior to embarking on a climb.

Condolences go out to the family of the fallen climber and those impacted by this rockfall.