At risk of extinction, black-footed ferrets in Colorado get experimental COVID vaccine 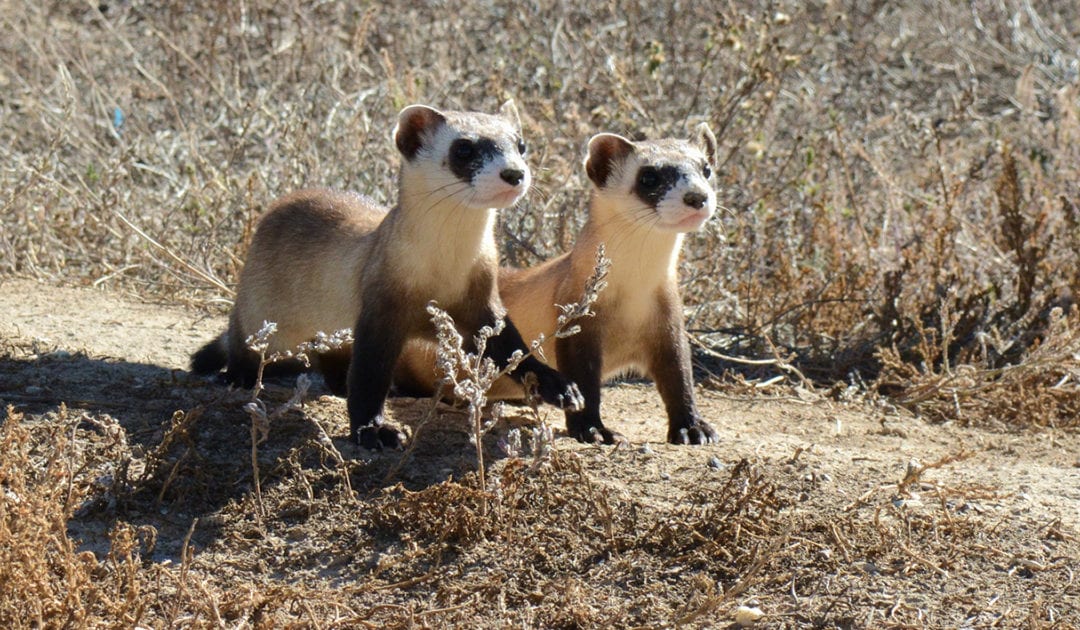 In late summer, as researchers accelerated the first clinical trials of COVID-19 vaccines for humans, a group of scientists in Colorado worked to inoculate a far more fragile species.

About 120 black-footed ferrets, among the most endangered mammals in North America, were injected with an experimental COVID vaccine aimed at protecting the small, weasel-like creatures rescued from the brink of extinction four decades ago.

The effort came months before U.S. Department of Agriculture officials began accepting applications from veterinary drugmakers for a commercial vaccine for minks, a close cousin of the ferrets. Farmed minks, raised for their valuable fur, have died by the tens of thousands in the U.S. and been culled by the millions in Europe after catching the COVID virus from infected humans.

Vaccinating such vulnerable species against the disease is important not only for the animals’ sake, experts say, but potentially for the protection of people. Some of the most pernicious human diseases have originated in animals, including the new coronavirus, which is believed to have spread from bats to an intermediary species before jumping to humans and sparking the pandemic.

The worry when it comes to animals like farmed minks, which are kept in crowded pens, is that the virus, contracted from humans, can mutate as it spreads rapidly in the susceptible animals, posing a new threat if it spills back to people. Danish health officials in November reported detecting more than 200 COVID cases in humans that had variants associated with farmed minks, including a dozen with a mutation scientists feared could undermine the effectiveness of vaccines. However, officials now say that variant appears to be extinct.

In the U.S., scientists have not found similar COVID mutations in the domestic farmed mink populations, though they recently noted with concern the discovery of the first case of the virus in a wild mink in Utah.

“For highly contagious respiratory viruses, it’s really important to be mindful of the animal reservoir,” said Dr. Corey Casper, a vaccinologist and chief executive of the Infectious Disease Research Institute in Seattle. “If the virus returns to the animal host and mutates, or changes, in such a way that it could be reintroduced to humans, then the humans would no longer have that immunity. That makes me very concerned.”

For the newly vaccinated ferrets, the main risk is to the animals themselves. They’re part of a captive population at the National Black-footed Ferret Conservation Center outside Fort Collins, Colorado, where there have been no cases of COVID-19 to date. But the slender, furry creatures — known for their distinctive black eye mask, legs and feet — are feared to be highly vulnerable to the ravages of the disease, said Tonie Rocke, a research scientist at the National Wildlife Health Center who is testing the ferret vaccine. They’re all genetically similar, having come from a narrow breeding pool, which weakens their immune systems. And they likely share many of the features that have made the disease so deadly to minks.

“We don’t have direct evidence that black-footed ferrets are susceptible to COVID-19, but given their close relationship to minks, we wouldn’t want to find out,” Rocke said.

Rocke began working on the experimental vaccine in the spring, as she and Pete Gober, black-footed ferret recovery coordinator for the U.S. Fish and Wildlife Service, watched reports about the new coronavirus with growing alarm. An exotic disease is “the biggest nemesis for ferret recovery,” said Gober, who has worked with black-footed ferrets for 30 years. “It can knock you right back down to zero.”

The ferrets are a native species that once roamed vast areas of the American West. Their ranks declined precipitously over many decades as populations of prairie dogs, the ferrets’ primary source of food and shelter, were decimated by farming, grazing and other human activity.

In 1979, black-footed ferrets were declared extinct — until a small population was discovered on a ranch in Wyoming. Most of those rare animals were then lost to disease, including sylvatic plague, the animal version of the Black Death that has plagued humans. The species survived only because biologists rescued 18 ferrets to form the basis of a captive breeding program, Gober said.

With the threat of new disease looming, Gober doubled-down on the strict infection prevention precautions at the center, which houses more than half of the 300 black-footed ferrets in captivity. An additional 400 have been reintroduced to the wild. Then he called Rocke, who previously created a vaccine shown to protect ferrets from sylvatic plague. It uses a purified protein from Yersinia pestis, the bacterium that causes the disease.

Would the same technique work against the virus that causes COVID-19? Under the research authority granted by the Fish and Wildlife Service, the scientists were free to try.

“We can do these sorts of things experimentally in animals that we can’t do in humans,” Rocke noted.

Rocke acquired purified protein of a key component of the SARS-CoV-2 virus, the spike protein, from a commercial producer. She mixed the liquid protein with an adjuvant, a substance that enhances immune response, and injected it under the animals’ skin.

The first doses were given in late spring to 18 black-footed ferrets, all male, all about a year old, followed by a booster dose a few weeks later. Within weeks of getting the second shots, tests of the animals’ blood showed antibodies to the virus, a good — and expected — sign.

By early fall, 120 of the 180 ferrets housed at the center were inoculated, with the rest remaining unvaccinated in case something went wrong with the animals, which generally live four to six years in captivity. So far, the vaccine appears safe, but there’s no data yet to show whether it protects the animals from disease. “I can tell you, we have no idea if it will work,” said Rocke, who plans to conduct efficacy tests this winter.

But Rocke’s effort makes sense, said Casper, who has created several vaccines for humans. Rocke’s approach — introducing an inactivated virus in an animal to stimulate an immune response — is the basis for many common vaccines, such as those that prevent polio and influenza.

Vaccines containing inactivated virus to prevent COVID-19 have been tested in certain animals — and in human vaccines, including CoronaVac, created by the Chinese firm Sinovac Life Sciences. But the effort in Colorado may be among the first aimed at preventing COVID-19 in a specific animal population, Rocke said.

Gober said he is optimistic that the ferrets are protected, but it will take a well-designed study to settle the question. Until then, he’ll work to keep the fragile ferrets free of COVID-19. “The price of peace is eternal vigilance, they say. We can’t let our guard down.”

The tougher task is doing the same for people, Gober observed.

“We’re just holding our breath, hoping we can get all the humans vaccinated in the country. That will give us all a sigh of relief.”