At least 98 coronavirus-related deaths in Colorado, as hospitalizations push past 700 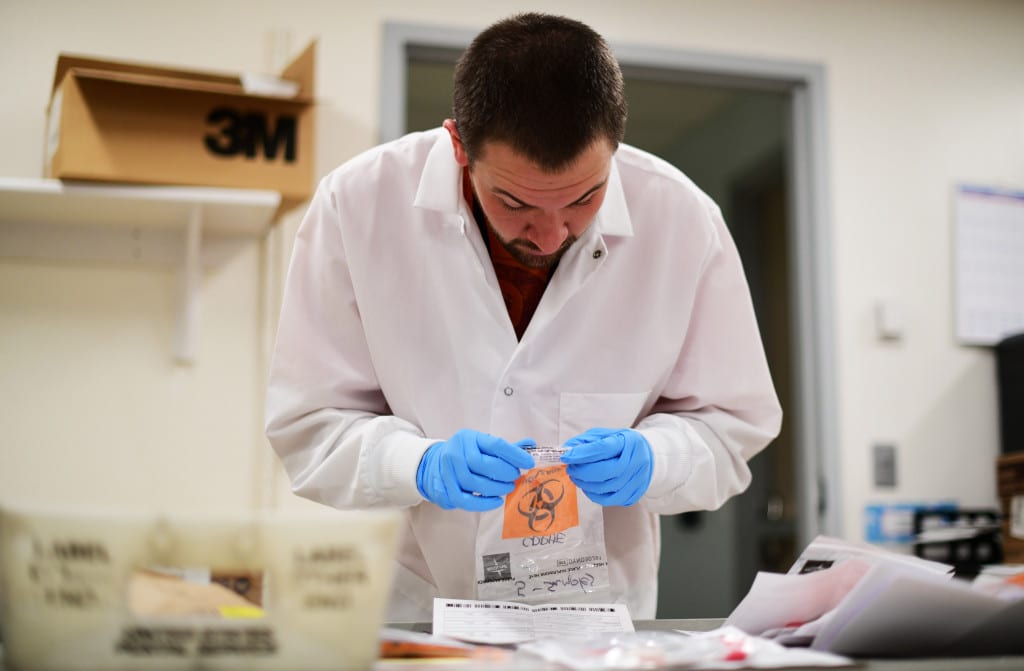 Four weeks to the day after Colorado confirmed its first case of the novel coronavirus, public health officials announced nearly 100 people have now died of the highly contagious respiratory illness — and they estimate the actual number of people infected statewide could number in the tens of thousands.

At least 98 people in Colorado have died of complications from the COVID-19 lung disease, and hospitalizations rose to 710, state and local health officials announced Thursday.

The announcement of 3,728 confirmed cases in the state — and 18 new deaths — comes as top health officials scramble to get enough beds, ventilators and other medical supplies before a feared surge in COVID-19 cases overwhelms Colorado’s health care capacity.

The speed of the new coronavirus’s spread has brought a humming economy to its knees and threatens to push the medical industry to its breaking point. Total deaths related to COVID-19 in Colorado have more than doubled since Saturday, with overall confirmed cases twice as high as one week ago.

A day after addressing Colorado’s desperate need for more medical supplies, Gov. Jared Polis released a letter he sent to Vice President Mike Pence over the weekend requesting additional resources be sent to the state.

“We are facing a crisis-level shortage of these essential supplies to protect our health care workers and first responders,” Polis wrote in the letter dated March 28, shared Thursday in a news release.

The Colorado Department of Public Health and Environment on Thursday announced 97 confirmed deaths tied to the coronavirus, and Eagle County health officials later revealed they had recorded their fifth COVID-19 death, a man in his 80s who had not yet been added to the statewide tally. One-third of the state’s coronavirus deaths have occurred in El Paso and Weld counties, with each recording 16 apiece.

State health officials also confirmed 21 outbreaks at residential and non-hospital health care facilities — the places considered most at risk to the new coronavirus.

Nearly 20,000 people have now been tested, even as Polis has repeatedly has expressed his frustration that the state has not reached mass testing capabilities. The finite resources have forced officials to prioritize testing for health care providers, first responders and serious cases requiring hospitalization. Nearly 25% of the more than 1,600 people whose results were returned on Wednesday, for example, tested positive for the virus — the highest rate to date.

That lack of testing has contributed to lower numbers across the board since the crisis began. The number of positive cases is likely four to 10 times higher than the data compiled by the state, Scott Bookman, the state’s incident commander for COVID-19, said on a conference call with reporters Thursday.

In order to keep people alive, Polis said the state needs more federal resources. In his letter to the vice president, he requested:

“I am asking that you increase the ventilators and PPE that is being sent to Colorado for this critical moment, to help us safely cross the bridge ahead of us until we can start to reap the benefits of our other unprecedented procurement and manufacturing efforts,” the governor wrote.

Meanwhile, state health officials are working around the clock to ready facilities and create new space for sick people in event of a surge — which officials say could come this month or as late as July. That means finding arenas, dorm rooms, event centers and other places to house patients. But the clock is ticking.

“It’s a tall order,” Mike Willis, the state’s director for the Office of Emergency Management, said in the conference call. “Scott (Bookman) was frank with the public yesterday. We’re very concerned. It’s a heavy lift, and lot of things have to come together rapidly. It places stress and demand on the supply system to provide enough equipment and the personnel system to provide enough qualified people.”

Willis said they have not begun construction on any overflow facilities yet, though they are speaking with several locations regarding contracting and leasing across the state.