At home for a year, Colorado Springs woman keeps busy with beautiful quilting 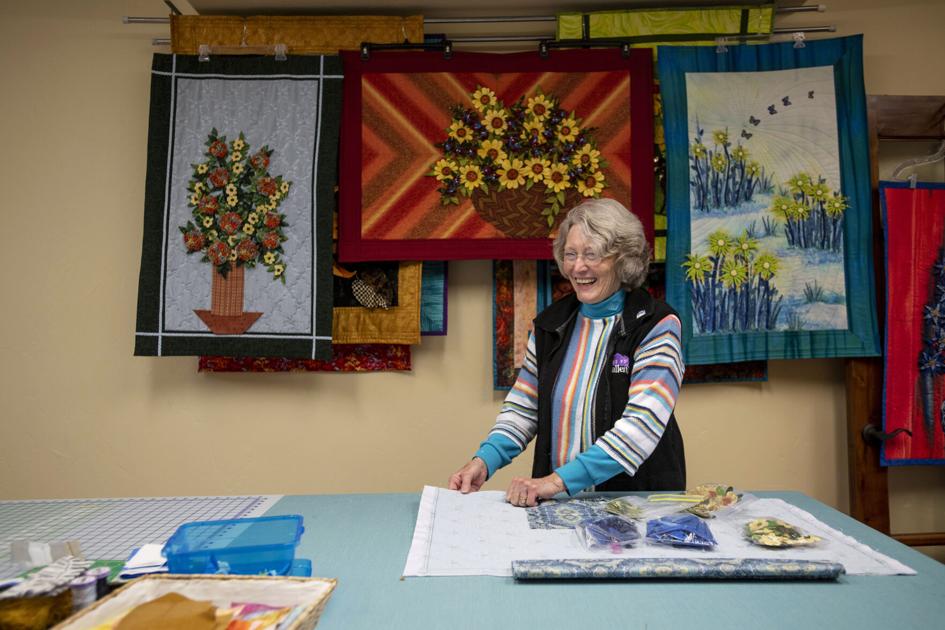 Every day looks about the same for Barbara Broshous.

She wakes up, has breakfast and walks downstairs to her studio to work on whatever project she feels like. After a lunch break, she heads back downstairs. Then it’s time for dinner and TV with her husband. And maybe a few more hours of studio time.

This has been her routine for the last year, ever since the pandemic started.

“I’m one of those at-risk seniors,” Broshous says.

She has barely left her house since March 2020. Early on, when neighbors were dropping off groceries for her, Broshous knew she’d need to keep herself occupied. She’s the kind of 78-year-old who has boundless energy for friends and being out and about.

“My mother is going to be 100 in two weeks,” she said. “I’ve always thought if I’m going to make it that long, I better keep myself busy.”

That’s where quilting comes in. For three decades, Broshous has quilted most days, often chipping away at one blanket that takes two years to complete. During quarantine, Broshous wanted a project that wouldn’t take so long.

At first, she made masks for neighbors and friends. Then she turned to a new type of quilting: She’s been making artsy wall hangings sprouting with handmade dimensional fabric flowers. The colorful backgrounds come to life with daffodils or a bouquet of daisies that seem to jump off the quilt.

“I’ve been very blessed to have quilting,” Broshous said. “It gives me something to do every day.”

Her love of the craft started 30 years ago when her daughter left for college, leaving Broshous with an empty nest. Broshous thought a homemade quilt sounded like a good gift for the occasion.

“I decided, her mother couldn’t go to college with her,” Broshous said. “So I’d send her a quilt.”

Really, she doesn’t know where the idea came from.

“Maybe it was one of those little things you were supposed to do and never did,” she said.

It wasn’t as easy as it sounded. Broshous stumbled through quilting books, with instructions that read “like Greek to me,” she says. Her daughter was a sophomore in college when she finally got the finished quilt.

“When I finished her quilt, I told myself I’d never do that again,” Broshous said. “It was just too much work.”

But she was wrong about that.

At 50, she retired from a career in nursing and her two kids were out of the house.

“It’s like, what do you do? What do you do with the rest of your life?” she said. “All the sudden, here you are with all these years ahead of you. It’s like we’ve been given a whole new life.”

With her new life, Broshous wanted to move from New York state to Colorado. And she wanted to get better at quilting. So she did.

She joined a local quilt club in Monument. She found friends and people to ask all her quilting questions. She soon became good enough to teach classes. Quilters started asking her the questions. She started traveling all over for meet-ups and competitions.

“This has kind of filled up the void in my life,” Broshous said. “It’s been like a second life.”

And it has filled up her days during a hard year.

She’s made 14 of those beautiful wall hangings. And even started a website to try to sell them.

For her, it’s more about getting her “play time” in the studio. There, hours just seem to pass. Sometimes, she feels stuck. Other times, she just tries whatever comes to mind.

“Sometimes I’m in the middle of my studio and just say thank you,” she says. “Because I don’t know where the ideas come from.”

There’s another reason to be thankful.

“It’s helped to take my mind off everything,” she said. “I miss my friends. I feel badly we can’t just give each other a hug and say, ‘Hey, how’s your week been?’”

When they see each other again, Broshous can’t wait to show friends her new creations. Until then, she’ll keep spending her days in the studio.

“It’s great fun for me,” she said. “I’m very grateful to have the ability to do this.”