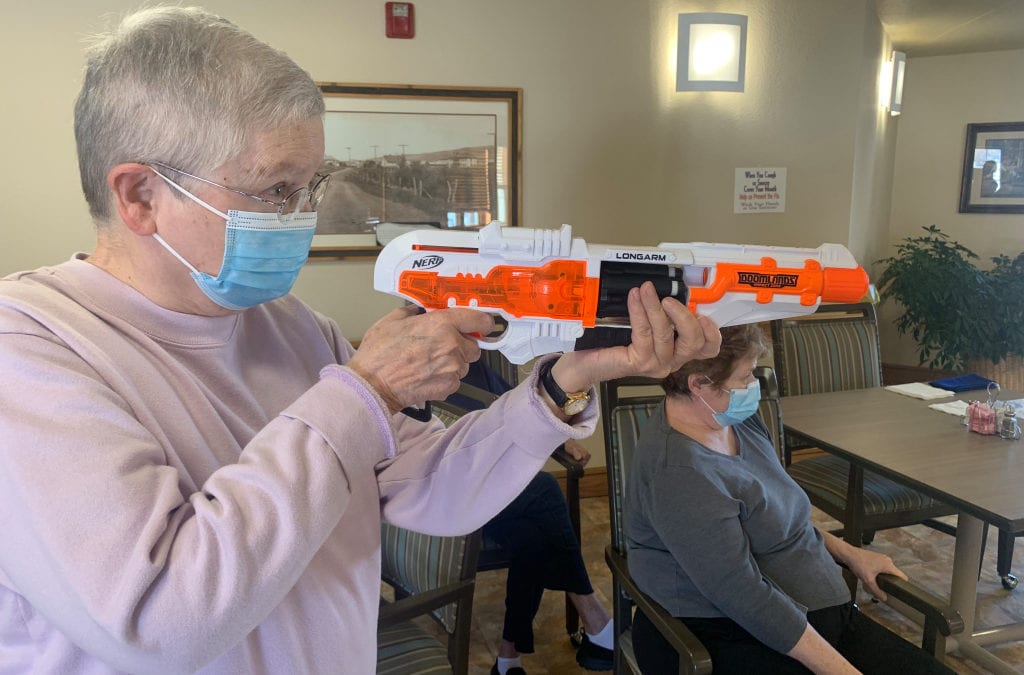 Bingo is back in the dining room. In-person visits have returned, too, though with masks and plexiglass. The Haven Assisted Living Facility’s residents are even planning a field trip for a private movie screening once they’ve all gotten their second round of COVID-19 vaccines.

Such changes are small but meaningful to residents in the Hayden, Colorado, long-term care home, and they’re due mostly to the arrival of the vaccine.

While the vaccine rollout has hit snags across the U.S., including in many large urban areas, some rural counties — with their smaller populations and well-connected communities — have gotten creative about getting the doses out quickly to long-term care facilities. They are circumventing bogged-down Walgreens and CVS, the pharmacy chains contracted for the campaign, and instead are inoculating their older residents with the counties’ shares of doses.

It’s clear why the counties are trying their own path. Federal data provided by the state shows that, as of Jan. 21, dozens of long-term care facilities in Colorado were enrolled to receive vaccines from Walgreens or CVS but still did not have any vaccination dates scheduled. Among assisted living facilities in particular, rural locations tended to have later start dates than non-rural ones. By mid-January, more than 90 facilities had opted out of the program that has been beset by cumbersome paperwork and corporate policies.

When Roberta Smith, who directs the Routt County Public Health Department, learned in December that The Haven and another facility in the county hadn’t gotten any dates from Walgreens for their shots, she diverted about 100 doses from the county’s allotment. The vaccines would likely have gone to health care workers, she said, but she couldn’t let the most vulnerable in the county wait.

Fourteen of the 19 people who died of COVID-19 in the county, after all, had been residents of those two long-term care facilities.

The county received a shipment of Moderna vaccines the following week to continue with its health care workers, Smith said.

The health department ensured that all able and willing residents of the county’s two long-term care facilities received their first doses before 2021 began. Smith suspects such reprioritization and fast deployment — despite the department’s reliance on spreadsheets and sticky notes to schedule visits — is easier in small communities.

“There is a sense of community in our smaller, rural counties that we’re all kind of looking out for each other. And when you tell someone, ‘Hey, we need to vaccinate these folks first,’ they’re quick to say, ‘Oh, yeah,’” Smith said.

Hayden, a town of about 2,000 in northwestern Colorado, is the kind of place where, within hours of Haven staffers posting online that they were looking for a grill, workers from the hardware store delivered one at no charge. It’s the kind of town where locals have come throughout the pandemic to serenade Haven residents with guitar, flute and violin performances outside the windows. When the virus hit The Haven, eventually killing two of its 15 residents, locals paraded past the facility in their cars, taped with balloons and signs that said “We love you” and “Get well soon.”

After all the heartache, isolation and waiting, newly vaccinated resident Rosa Lawton, 70, is ready to bust out of The Haven. She said she expected to get her second vaccine dose Jan. 28.

“I hope to be able to go shopping at Walmart and City Market and go to the bank, the library, the senior center. … I won’t stop,” she said, laughing. “Right now, we’re restricted to the building.”

Even after getting everyone vaccinated, though, assisted living locations won’t be able to fling open the doors quite yet. State and federal officials need to give the OK, said Doug Farmer, president and CEO of the Colorado Health Care Association, which represents long-term care facilities in the state. Still, the combination of vaccines, repeated negative COVID-19 tests and a lower level of virus spread in the community is allowing some facilities the peace of mind to crack the doors open just a bit in the meantime.

Until recently, Lawton and others at The Haven were playing bingo perched in their doorways, with a staff member moving down the hallway calling out numbers. Lawton said she could see about four others from her door, but not her friends Sally, Ruth or Louise. Now, they’re back in the dining room, with one person to a table and playing with sanitized chips.

“We can see each other and we’re closer together and we can hear the caller better,” said Lawton. “It’s just more of a group experience.”

Residents can now gather in the common areas, wearing masks, to play the piano and do target practice with foam dart guns. And the excursion to a movie theater next month will be the first field trip in nearly a year. (Lawton is rooting for watching “The Sound of Music.”)

Fraser Engerman, a spokesperson with Walgreens, confirmed that some counties moved ahead with vaccinations before the company received its allocation, and said the company is on track to complete vaccinations at all Colorado long-term care facilities that they were responsible for by the end of January. Monica Prinzing, a CVS Health spokesperson, said that her company has completed first doses for all 119 skilled-nursing facilities in Colorado and more than half the assisted living sites it partnered with, adding that their team is working closely with facilities to “remain on track to meet our program commitments.”

Along the state’s eastern edge, where Colorado meets Kansas, a pair of counties is already done vaccinating long-term care residents, according to Meagan Hillman, the public health director for Prowers and Kiowa counties.

In December, Hillman and her colleagues started to wonder just how Walgreens was going to get the shots to their four local long-term care facilities.

“Out here, I’m two-plus hours from the closest Walgreens, and I don’t even know where a CVS is,” she said. “It’s such a huge operation and we just were worried, you know. Oftentimes the little guy gets left out or left for last.”

Hillman said she and her colleagues managed to secure Pfizer vaccines from a local hospital.

“We have been so beat down in public health that I actually went and did the vaccination clinic,” said Hillman, who is also a physician assistant. “We just needed that — a good, heart-swelling thing to do.”

She said it indeed helped boost her spirits to give the shots herself. “Finally, I feel like the light at the end of the tunnel is not a train,” she said.

Kaiser Health News is a nonprofit news service covering health issues. It is an editorially independent program of the Kaiser Family Foundation that is not affiliated with Kaiser Permanente.