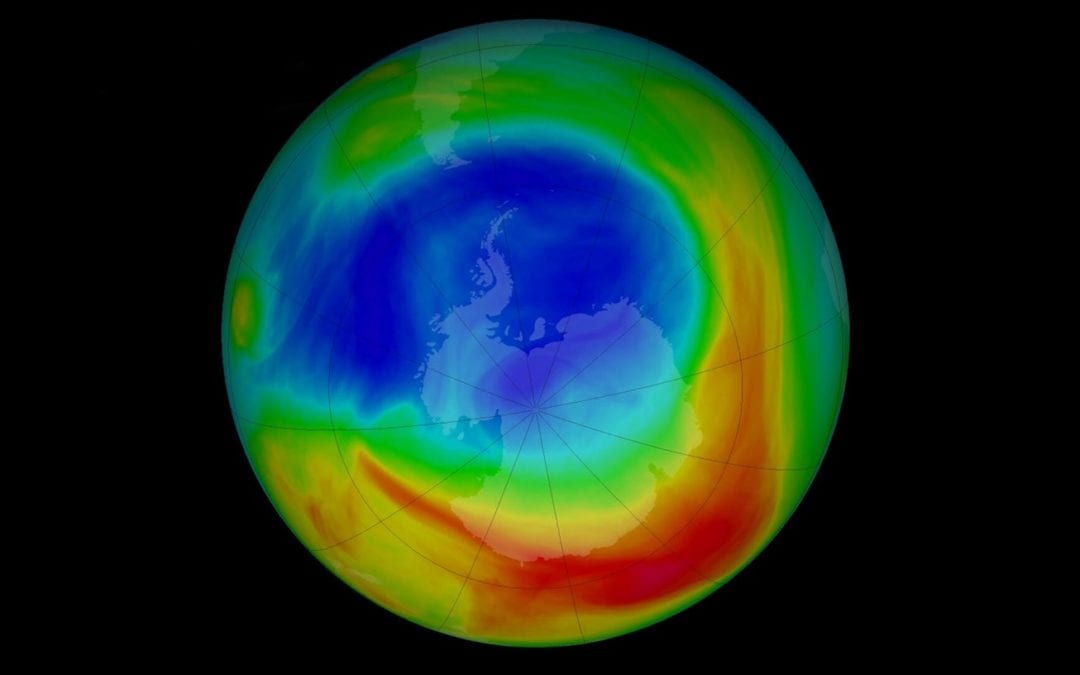 It has been more than 30 years since the world banned the chemicals that were depleting Earth’s protective ozone layer and simultaneously triggering some troubling changes in atmospheric circulation in the Southern Hemisphere.

Now, new research published this week in finds that those changes have paused and might even be reversing because of the Montreal Protocol—an international treaty that successfully phased out use of ozone-depleting chemicals.

“This study adds to growing evidence showing the profound effectiveness of the Montreal Protocol. Not only has the treaty spurred healing of the ozone layer, it’s also driving recent changes in Southern Hemisphere air circulation patterns,” said lead author Antara Banerjee, a CIRES Visiting Fellow at the University of Colorado Boulder who works in the Chemical Sciences Division of the National Oceanic and Atmospheric Administration (NOAA).

The ozone hole, discovered in 1985, has been forming every spring in the atmosphere high over Antarctica. Ozone depletion cools the air, strengthening the winds of the polar vortex and affecting winds all the way down to the lowest layer of Earth’s atmosphere. Ultimately, ozone depletion has shifted the midlatitude jet stream and the dry regions at the edge of the tropics toward the South Pole.

Previous studies have linked these circulation trends to weather changes in the Southern Hemisphere, especially rainfall over South America, East Africa, and Australia, and to changes in ocean currents and salinity.

The Montreal Protocol of 1987 phased out production of ozone-destroying substances such as chlorofluorocarbons (CFCs). Beginning around 2000, concentrations of those chemicals in the stratosphere started to decline and the ozone hole began to recover. In this study, Banerjee and her co-authors have shown that around the year 2000, the circulation of the Southern Hemisphere also stopped expanding polewards—a pause or slight reversal of the earlier trends.

“The challenge in this study was proving our hypothesis that ozone recovery is in fact driving these atmospheric circulation changes and it isn’t just a coincidence,” Banerjee said.

To do that, the researchers used a two-step statistical technique called detection and attribution: detecting whether certain patterns of observed wind changes are unlikely to be due to natural variability alone and, if so, whether the changes can be attributed to human-caused factors, such as emissions of ozone-depleting chemicals and CO2.

Using computer simulations, the researchers first determined that the observed pause in circulation trends couldn’t be explained by natural shifts in winds alone. Next, they isolated the effects of ozone and greenhouse gases separately.

“Identifying the ozone-driven pause in circulation trends in real-world observations confirms, for the first time, what the scientific ozone community has long predicted from theory,” said John Fyfe, a scientist at Environment and Climate Change Canada and one of the paper’s co-authors.

With ozone recovering and CO2 levels continuing to climb, the future is less certain, including for those Southern Hemisphere regions whose weather is affected by the jet stream and those at the edge of the dry regions.

“We term this a ‘pause’ because the poleward circulation trends might resume, stay flat, or reverse,” Banerjee said. “It’s the tug of war between the opposing effects of ozone recovery and rising greenhouse gases that will determine future trends.”

However, a 2018 report from the United Nations says that the infamous hole in the ozone layer could be totally healed by the 2060s—and in some areas of the world, it could be as soon as 2030.