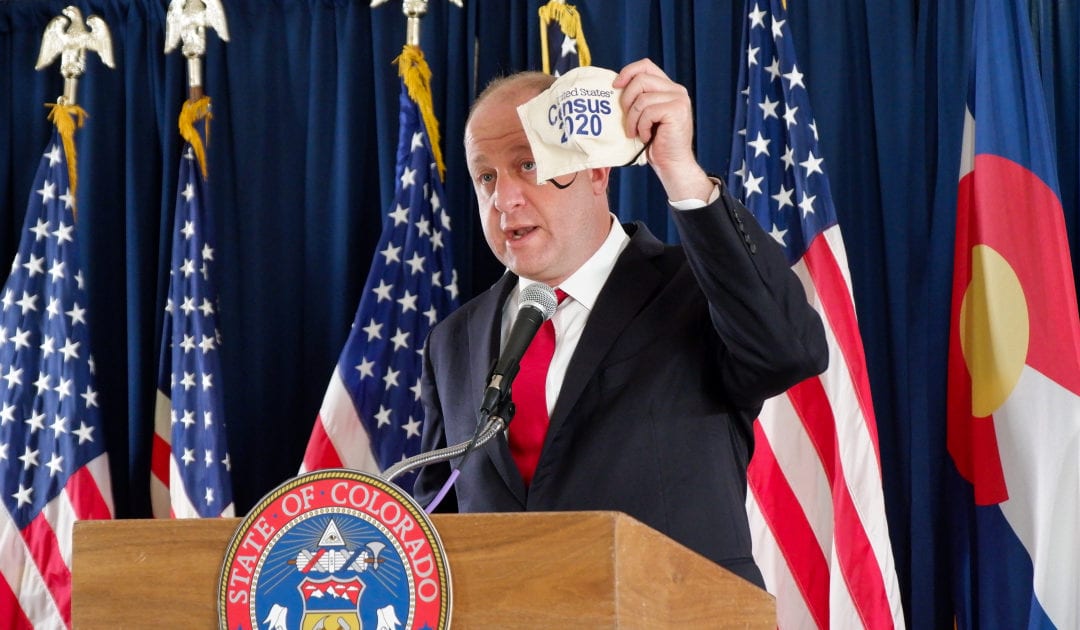 Sept. 30 is the last day for Coloradans to respond to the 2020 census, the decennial poll of everyone living in the U.S. that determines how billions of dollars are spent across the country.

As of Thursday, less than a week before the deadline, more than 96% of the state’s households have been counted, with almost 70% responding on their own. That’s almost two percentage points higher than the equivalent moment of the 2010 census.

Not bad in what’s been an unprecedented year for the Census Bureau — billions of dollars less in funding than expected, fear-inducing rhetoric around a potential citizenship question, multiple timeline changes and the general chaos that comes with a global pandemic — let alone everyone else.

Still, it’s likely that many folks will not be counted this year, though the jury’s out as to how the undercounts will compare to previous censuses.

Undercounting has real consequences both for individuals and their communities. Each person counted translates to roughly $2,300 worth of federal tax dollars allocated every year to the top 55 federal programs. These include resources for specific demographic groups, such as Head Start, Medicare and Medicaid, as well as general needs such as maintaining state roads and highways.

In other words, for every person who isn’t counted, their community loses out on about $23,000 worth of programs, support and infrastructure during the decade after a census. Scale that up, and it means millions of dollars will not be allocated to communities that often desperately need it — including renters, homeless folks, racial and ethnic minorities, rural areas — but are chronically undercounted.

“We paid federal taxes, and these are just a redistribution of those taxes back to the state,” said Elizabeth Garner, Colorado’s state demographer. “We deserve all those dollars coming back, and certainly now with COVID, anything that’s going to be able to support our public health and other human services is going to be critical.”

Additionally, the census serves as the standard for divvying up the 435 U.S. House of Representatives seats. If a state is undercounted, it risks losing some of its fair share of representation in national discussions on how to spend the very pot of money that includes its residents’ taxes. Many in Colorado have hoped that the 2020 census would help the state get one more of those 435 representatives; currently the state has seven.

Census officials aren’t just guesstimating undercounts. The demographics of birth and death records, as well as who moves into and out of the state, should roughly line up with census demographics; when they don’t, it can indicate an undercount.

The other main option for understanding an undercount is built into the census process itself: the post-enumeration survey. Once the official count is over, census workers go back to a sampling of neighborhoods and count residents in person, then compare the two numbers to see how accurately they line up.

But it’s unheard of to officially adjust the census numbers themselves. Even the monthly American Community Survey, which asks for more detailed information such as education, housing and income, extrapolate from the census.

Yes, the kids count, too

Among the groups that are chronically undercounted, young kids have one of the worst records. Sarah Hughes, vice president for research initiatives at the Colorado Children’s Campaign, noted that many people simply don’t think young children need to be counted. Young kids are also more likely to live in poverty or in families that move often, two risk factors that can limit the count for any demographic group.

In the 2010 census alone, experts estimate about 5% of children under the age of 5 were left out of household census responses nationwide — equal to about 1 million kids — and that number is likely higher for kids from racial and ethnic minority groups.

“It becomes this double disadvantage,” Hughes said. “It can have real and significant implications for kids’ health and well-being.”

Undercounting young kids can have a direct impact on the programs and resources that benefit them. School districts may struggle to plan effectively for how many children will be attending, leading to not enough teachers on staff, large class sizes and crowded buildings. Federal programs such as Head Start, which provides a variety of services for low-income families and their young ones, may not have the capacity on the local level to effectively help everyone.

Theoretically, the state could try to compensate for underfunding in its own budget. But Hughes said Colorado’s unique fiscal context, with laws like TABOR limiting the state’s ability to raise taxes, can put the state at a “significant disadvantage” for helping those who need it most.

Rural areas still slow to show up, likely left in the dust (again) for the next decade

The Colorado Sun reported in June that rural areas were significantly lagging in self-response rates; Hinsdale County, for example, was at just 18%. Less than a week before the end of the census, things have improved in some places, but in many, the self-response rate is actually worse than it was in the last census. As of Thursday, Costilla County was the furthest behind its 2010 returns, clocking in at a 27.5% self-response, over 9 percentage points below this time in 2010.

Much of the difficulty counting rural communities is logistical. This is the first census to offer an online option, in addition to mail-in forms and answering over the phone. But Miriam Gillow-Wiles, executive director of the Southwest Colorado Council of Governments, notes that the online form is only helpful if people have internet access in the first place. Earlier this year, the state missed its goal to hook up 92% of rural residents with broadband internet.

Two reservations overlap Colorado’s boundaries: the Ute Mountain Ute tribe and the Southern Ute tribe. As of Thursday, both are self-reporting at higher rates than a decade ago — Ute Mountain Ute is at 39.5%, up from 27.6% in 2010, and Southern Ute is at 49.8%, up from 46.7% last time. Most of this year’s self-response rates are via the online form, but many folks don’t have internet access. And the Census Bureau won’t send documents to a post office box, even though that’s the only way that reservations get their mail.

“That makes it really hard for people to fill those out, if they’re not getting a document,” Gillow-Wiles said.

And it’s not like each county’s census returns occur in a vacuum. Many of the major roads that are maintained through federal funds function as county lines, and given the geography, they’re often more stressed than roads in other areas. Gillow-Wiles pointed out that if the county on one side of the road has more funding than the county on the other side, it can be tough to gather enough funds to do the necessary repairs.

Before the COVID-19 pandemic, SWCCOG was going to use a grant for almost $74 million from the state Department of Local Affairs to post staff equipped with tablets in front of grocery stores, so residents who might not have internet access could take five minutes from their errands to fill out the survey. Of course, Gillow-Wiles said, that plan “got the legs kicked out from underneath it.”

“A lot of the plans we put in place ended up sort of evaporating,” Gillow-Wiles said.

Instead, the intercounty alliance pushed for more radio and newsletter PSAs. They worked with local utility providers to include messaging in paper bills that reminded people to respond to the census. They even had masks printed with the state’s 2020 census logo.

It’s not yet clear how much those efforts will pay off. The full extent of an undercount won’t be clear until the end of the year, but Gillow-Wiles said it’s almost certain that the community will be undercounted, to its own detriment.

“If we don’t have the funding to upgrade the roads, then we don’t get the tourism, which puts us into this negative feedback cycle,” Gillow-Wiles said, adding that the region would like to expand its broadband internet access, but that’s contingent on funding, too.

A perfect storm of confounding obstacles

The 2020 census has been anything but typical, to say the least. There’s a global coronavirus pandemic that, as of Tuesday, has killed more than 200,000 Americans. Following concerns around in-person work during COVID-19, census-takers were given less than two months to complete their field operations.

Not to mention the national discussion last year around adding a question to the census asking if respondents were citizens. Though the question was ultimately rejected, Gillow-Wiles noted that fear still lingers among undocumented communities that their response would be used to track them down for deportation. (According to Title 13, which governs the Census Bureau, the personal information of survey respondents can’t be used against them by a government agency or court.)

“I am concerned that it’s going to lead to a more drastic undercount than we already expect,” Gillow-Wiles said.

There’s also the issue of second homes. A combination of pandemic-induced corporate remote work initiatives and disrupted vacation seasons mean that many are living in different places than they would during a normal year, whether that means moving to the mountains or staying in a different home on census day, April 1, than they normally would.

Beth Jarosz, senior research associate with the Population Reference Bureau, which contracts with the Census Bureau, noted that white homeowners are often overcounted because they are more likely to own more than one home. And because self-response rates are based on households, not on the estimated number of people in that region, it’s hard to tell right now how accurate the count is for counties — often those in the high country — with a lot of secondary homes.

Pre-pandemic, the census was supposed to finish up in July, giving the bureau ample time to parse through and double-check numbers before handing them to the Oval Office. After the pandemic began, the deadline was moved back to Oct. 31. But in July, the Trump administration announced it would shorten the deadline back to Sept. 30.

Courts have yet to decide whether or not the bureau is required to extend its operations into October, which could make or break the difference in closing the gap for undercounted communities. There’s also the question of when numbers are due to the president; typically the deadline is Dec. 31, but bureau officials have argued that they need at least until April to effectively ensure the data’s quality.

Jarosz said that the timeline changes, citizenship question, and pandemic chaos have all come together in a perfect storm to destabilize the Census Bureau’s operations, which have historically been respected as nonpartisan.

“It has certainly been a more politicized census than it needed to be,” Jarosz said. She added that 2020 is the third census she’s worked on, and “this is by far the hardest, and most complicated, and most politically fraught census in my lifetime.”