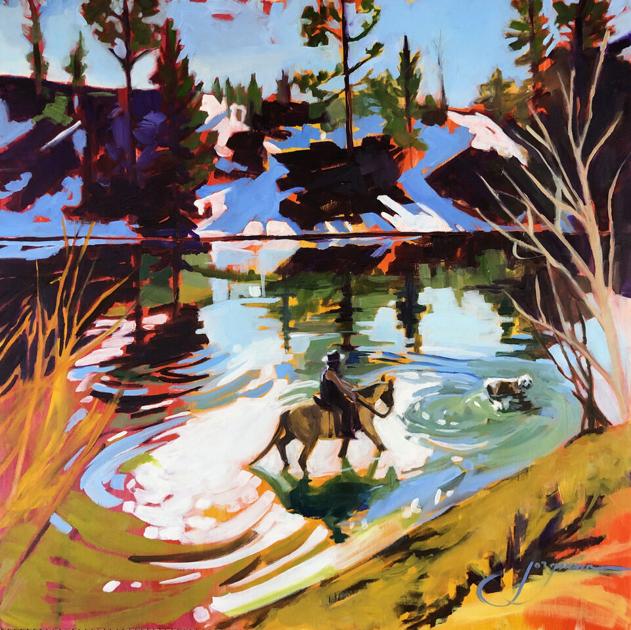 Of all the sights Leslie Jorgensen has seen while exploring Colorado, she still can’t get one of her mind: the first time she saw snow.

The Florida native had just moved across the country to Denver. She was 23. She didn’t even own a coat.

When the snow fell that day in 1989, she felt something change within her.

The beach life never felt right to her. As a kid, she’d daydream about living somewhere with snow and fall leaves.

And she daydreamed about art. About being an artist.

Her parents, though, were practical.

“Well…,” she remembers them saying. “Why don’t you think about a career that makes a living?”

Graphic design seemed like a good answer. At Central Florida University, she still fit in drawing classes. A job at the Denver Post brought the recent graduate to Colorado. She later worked for a design firm.

She was nearing 50 when that familiar thought creeped back in: “If I don’t do art now, when will I?”

“So I put my passion ahead of my paycheck,” Jorgensen said. “I was ready to live on the cheap if I had to. I just knew I had to do this.”

She’s been a fine art painter, full time, since 2015. Her paintings are inspired by outdoors adventures that took hold of her 30 years ago.

“Snow Dance,” for example, was her recent solo show at Portfolio Gallery in Breckenridge. The paintings show white-covered mountains, but not exactly how one might see them in real life. Random pops of color — in the sky or near peaks — add Jorgengen’s staple sense of abstractness and offer a feeling of excitement, like the feeling that might make a skier want to do a snow dance to summon the snow.

“My paintings are not intended to be literal interpretations of these places, but the way I feel when I experience them,” Jorgensen writes on her webste.

A big part of that experience, for her, is joy.

Whether she’s backpacking or hiking or skiing or on a hut trip, Jorgensen says she’s in her happy place.

“It’s humbling to be in a place where you’re outdoors and it’s just you and maybe a backpack,” she said. “I try to find ways to put that feeling into a piece of art.”

In many of her paintings, for example, the people are extra small and the mountains are extra big.

“That’s how I feel in a place like that,” she said. “You feel small and vulnerable.”

She’s inspired by other forms of adventure.

Shortly after she and her husband moved to Salida, where Jorgensen has her own gallery, she started a series of paintings inspired by bikes she saw around town.

“To me, it’s joyful to see a bike,” she says. “As a way of life, bikes are wonderful way to get around.”

The best compliment she hears is, “That looks joyful.” Because that’s how being outside makes her feel. And that’s what she tries to put on a canvas.

“My artwork sits where my heart is,” she says. “And that’s Colorado. And the experiences it’s given me.’