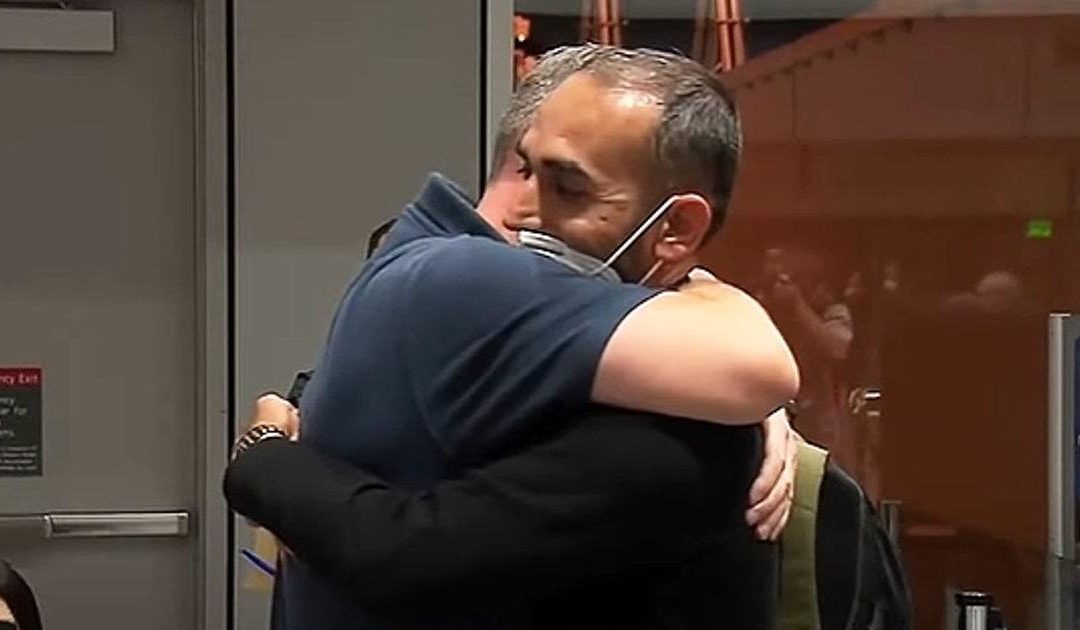 Catching up with an old friend is incredibly fun and gives people a chance to make even more memories together. It can be heartwarming, emotional and extremely powerful to finally see someone for the first time in many years. For two men, their most recent meet-up was filled with emotions.

Ahmad Siddiqi, an Afghan interpreter, and his family arrived at Denver International Airport in Denver, Colorado, on the evening of Oct. 5, 2021. Siddiqi, his wife and their four children were met with some friendly faces as the interpreter was reunited with one of his friends and a fellow hero.

He was reunited with Army veteran Scott Henkel from Broomfield, Colorado, someone Siddiqi had served with while overseas in Afghanistan. Arriving at the airport was the final step in the interpreter’s escape from his home country. The two had forged a beautiful friendship with one another after Siddiqi helped save Henkel’s life. They hadn’t seen each other in about 15 years, but it was as if no time had passed when they embraced each other in an emotional hug.

Siddiqi and his family were forced to flee from their home as the situation in Afghanistan grew more and more dire, with the safety of civilians put at risk, especially the safety of women and children. As Siddiqi was forced to leave his life behind following the suicide bombing in Kabul, he looked forward to what he had in store for the future now living in the United States. Most of all, he looked forward to finally reuniting with his heroic friend.

After landing at Denver International Airport, Siddiqi and Henkel were finally able to see each other once again and embraced each other with a warm hug. The interpreter revealed that he hadn’t seen his veteran friend in about 15 years, as per Denver 7. Siddiqi and his family would be moving into the same neighborhood as the Henkels, who had done everything possible to help the Siddiqi family seek refuge in the United States.

Emotions ran high as Siddiqi described how heartbreaking it was to leave his home country, but how grateful he was to know he had someone to lean on and somewhere safe to go. “I’m just feeling emotional, a lot of memories are coming, and I’m very glad to see Captain Scott after probably 15 years,” he said, as per Yahoo.

Henkel had similar feelings and said: “It’s been a ride. We started in a place of complete desperation, fear and worry. And now I put my arms around him and it’s like, ‘He’s really here.’ This is a real thing now, he’s my neighbor.”

Henkel’s wife Heidi also had nothing but kind words to say about the Siddiqi family and welcomed them with open arms. “The Siddiqi family is safe and loved, and not only loved but overly welcomed in Colorado,” she said.

The Afghan interpreter was emotional, but remained in high spirits as he thought about the future ahead. “It’s leaving a family and joining another family,” he said. Denver 7 reported that both Siddiqi and Henkel’s children were already bonding, bringing the two families even closer together.

What did you think about this emotional reunion between two friends? Let us know, and be sure to pass this along to your family and friends to find out what they think, too.

Please scroll below for more stories 🙂