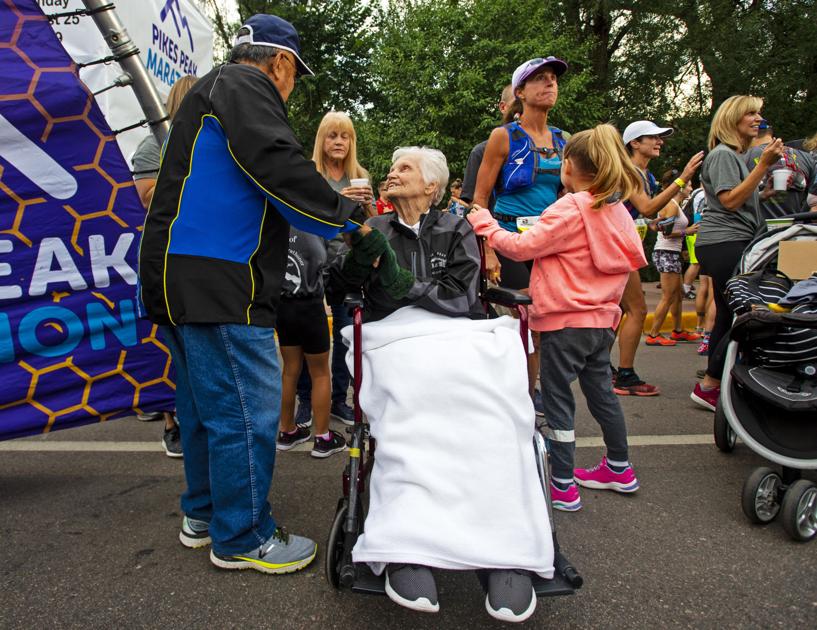 It took just over nine hours for Arlene Pieper Stine to make history.

It took 50 years for anyone to know about it.

When Pieper Stine ran the Pikes Peak Marathon in 1959, wearing tennis shoes from a dime store and a white blouse tied in a knot, she was racing to market the fitness studio she owned in Colorado Springs.

She ended up with a far bigger achievement: She was the first woman to finish a sanctioned marathon in the United States.

It’s an honor the one-time marathoner will be remembered for. Pieper Stine died Feb. 11 in Capitola, Calif., according to an obituary published Sunday in the New York Times. She was 90.

Her death was confirmed by her daughter Kathie Pieper, who said her mother had Alzheimer’s disease, the obituary stated.

In the last decade or so of her life, Pieper Stine appeared “out of obscurity,” as Pikes Peak Marathon Inc. president Ron Ilgen says, to become a “legend” in Colorado and in the running community.

She didn’t know of her place in history until 2009, when Pikes Peak Marathon race officials, after years of trying, tracked her down.

That was something of a miracle, says Ilgen.

A private investigator failed to find Pieper Stine, who only lived in Colorado Springs for a few years and changed her name multiple times. Ahead of the marathon’s 50th anniversary, Ilgen tried another tactic: He bought an ad in The Gazette to help find her. The reward of $200 was enough to intrigue a local genealogist, who reached Pieper Stine in California and shocked her with the news.

“I find it amazing we were able to find her,” Ilgen said. “It would’ve been a shame for her to not know this during her lifetime. She needed to know the magnitude of her accomplishment.”

Just days later, Pieper Stine flew to Colorado to be part of the 50th anniversary celebration. While runners asked for autographs and photos and local media asked for interviews, Ilgen said the nearly 80-year-old woman kept saying, “I can’t believe this.”

“She was in a daze,” he said. “You could see it in her face that she couldn’t believe what was happening.”

That started a tradition of Pieper Stine returning to Manitou Springs each year to serve as the race’s official starter. She brought her daughter Kathie, who has her own impressive Pikes Peak tale from 1959. At 9 years old, she followed her mom up to the mountain’s summit.

“At the time, everyone made a bigger deal about that,” Ilgen said. “That her daughter was able to do the ascent.”

Also at that time, women weren’t permitted to run marathons at all. Eight years after Pieper Stine’s marathon finish, Kathrine Switzer famously became the first woman to run the Boston Marathon. Switzer has become a running icon, and the same word could be used for photos of the race manager trying to pull her off the course. But there hasn’t been as much recognition or Pieper Stine, which Ilgen attributes to the Pikes Peak Marathon not being as well known.

“Women were really ostracized from running distances in the 1950s and ’60s,” Ilgen said. “And here’s Arlene, with this pioneer spirit saying, ‘I can do this.’”

As he tells it, Pieper Stine wasn’t even planning to descend the mountain that day.

“She was feeling good enough that she just came on back down,” Ilgen said. “Nobody thought much of it.”

Now, she’s thought of as an inspiration. She was named one of Runner’s World’s “Heroes of Running” in 2014 and inducted into the Colorado Springs Sports Hall of Fame in 2016. In 2019, a group of women honored her with the “Dress Like Arlene” Pikes Peak Run and Hike.

And when Pieper Stine spoke at the marathon’s 50th anniversary celebration, there were tears in the eyes of many people in the room, especially the women.

“She epitomized that you can do anything the guys can do,” Ilgen said. “She proved that women would be able to run that distance.”

In recent years, Pieper Stine would often comfort nervous runners, saying, “If you put your mind to it, you can do it.” Some of them would ask to touch her for good luck.

Even so, she never cared to do the marathon again. According to a 2017 interview with Boston public radio station WBUR, she “felt pretty good” after finishing the race in nine hour and 16 minutes.

“I’m sure I was a little tired,” she said. “But I wasn’t completely exhausted.”

Three days later, though, she lost all of her toenails and decided to give it a rest.

“That mountain is something else,” she said in the interview. “Once was enough.”