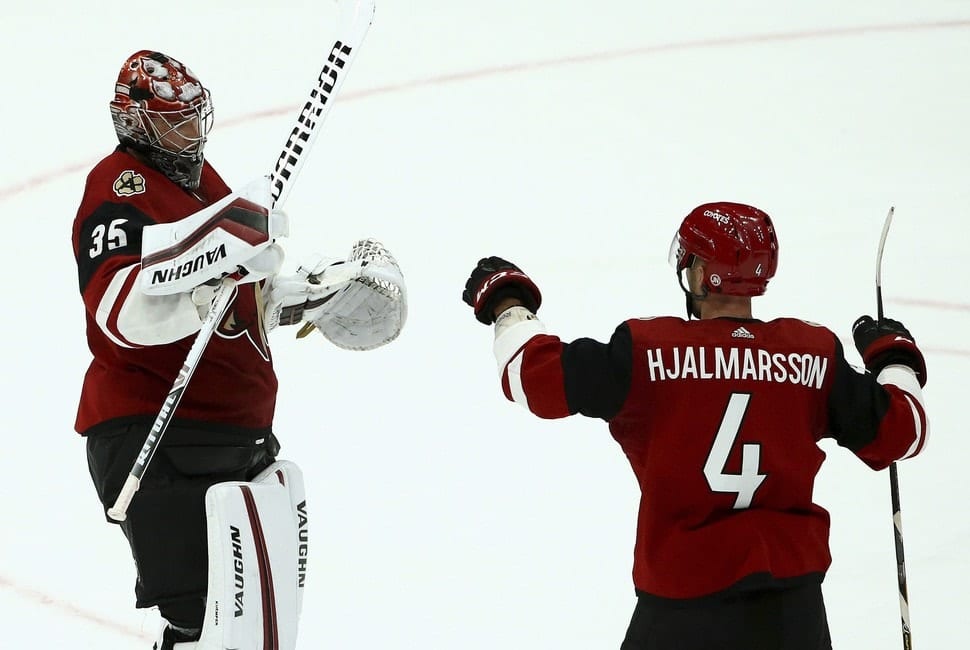 On Saturday afternoon in Edmonton, the veterans came through for the Arizona Coyotes, as the club picked up a huge 4-2 victory over the Colorado Avalanche in Game 3 of the Western Conference First Round to cut their series deficit to 2-1. It was the Coyotes’ first Stanley Cup playoff victory since Game 4 of the Western Conference Final on May 20, 2012 – a span of 3,009 days.

Derek Stepan scored his 20th-career playoff goal at 6:29 of the first period to open the scoring, while 2012 Stanley Cup champion and qualifying-round overtime hero Brad Richardson added a goal with less than 30 seconds remaining in the second period to give the Coyotes a 2-1 lead that they’d hold for most of the third period.

Taylor Hall and Lawson Crouse later added empty netters, and Hall’s stood up as game-winner after a late goal from Colorado’s Mikko Rantanen. Andre Burakovsky added Colorado’s other goal at 13:12 of the second period.

Stop me if you’ve heard this before: goaltender Darcy Kuemper carried the Coyotes to victory. He’s been doing it all season (and postseason), and Kuemper came through again on Saturday, stopping 49 of 51 shots in an absolutely masterful performance in goal.

Time and time again, the Coyotes left Kuemper out to dry against a relentless Colorado attack. Time and time again, Kuemper came through with a big save, and the Coyotes are still alive in this series as a result. After his 49 saves on Saturday, Darcy now boasts a .933 save percentage for the playoffs, with 263 stops on 282 total shots faced across Arizona’s seven postseason games.

Put simply, the Coyotes would not be here without Kuemper’s play. He’s kept them in every single game, and, as we’ve said before, they’ll go as far as he takes them in these playoffs.

Kuemper’s play, as always, was excellent, but the performance of the rest of the team left a lot to be desired. Once again, the Coyotes’ power-play unit was unable to get anything going against the Colorado penalty kill, as they went 0-for-3 on Saturday to fall to 0-for-9 in the series, and 2-for-21 (9.5 percent) in the postseason overall.

The ‘Yotes weren’t great at 5-on-4 during the regular season, but they weren’t this bad, either. After hitting on about one-in-five power-play chances during their 70 games before the season was canceled, Arizona is now hitting on less than one-in-ten of their opportunities in the postseason, and it’s costing them big-time.

The Coyotes arguably could have a 2-1 lead in this series if they could have scored a timely power-play goal in Game 2, and they could have won Game 1 as well if they had put up a goal in the first 53 minutes of action before Colorado got on the board. Head coach Rick Tocchet needs to do something to get this unit rolling, or else it’s likely that his team will let Kuemper’s outstanding play go to waste.

Phil Kessel, in particular, needs to find a way to contribute some offense – he’s scoreless in three games of this series. He was a big part of Arizona’s success at the offensive end against Nashville, posting four points in as many games, and he’s had a big hand in the Coyotes’ struggles here against Colorado, where they’ve scored just four non-empty net goals. Arizona needs more from “Phil the Thrill” here in these playoffs.

Tocchet’s group can’t expect Kuemper to carry them to 1-0 or 2-1 victories every night against a team like Colorado – they have to score some goals to have a chance in this series, and getting some production from the power play would go a long way in helping in this area.

With three games done, the Coyotes and Avs will meet again in Game 4 on Monday afternoon at 3:30 P.M. local time in Edmonton (2:30 P.M. in Arizona). The game will be televised nationally in the United States on the NBC Sports Network and locally in the Valley of the Sun on Fox Sports Arizona.

Teams that lose Game 4 to fall behind 3-1 in a series come back to win only about 10 percent of the time. The Coyotes already put themselves at a disadvantage by losing the first two games, but they can get right back in the series with a win on Monday afternoon. Expect another solid effort from Kuemper – if the rest of the team can contribute as well, Arizona will have a good chance to get this thing evened up at two games apiece.