Are you wearing your mask? Because public health officials in Colorado are watching you to find out. 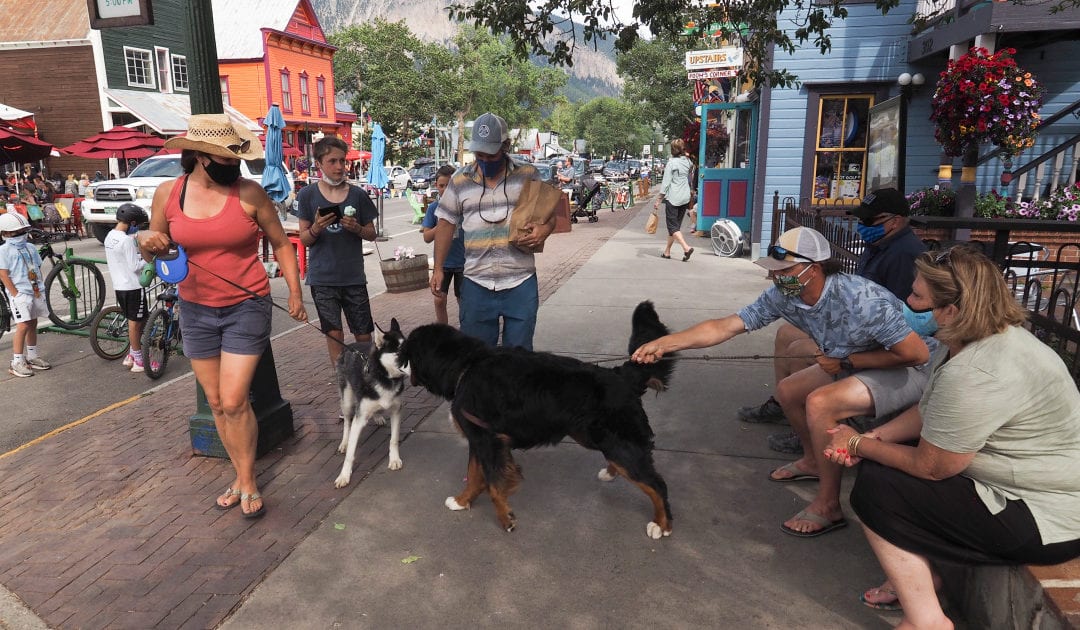 They really are watching you.

From their cars and trucks, parked in the lots of King Soopers, Whole Foods and the corner store, they are staring out their vehicle windows as you shop. But these guys — volunteers from the public health department — are only interested in what’s on your face.

Mask or no mask.

It’s a simple tally mark, a “quick and dirty” assessment not meant for serious scientific scrutiny.

But thanks to the reconnaissance, Tri-County Health Department has weekly data going back to April about the percentage of people in Adams, Arapahoe and Douglas counties who are putting on face coverings when they go out in public. The surveys ranged from a low of 56% of people observed in Adams County the week of July 5, to a high of 96% seen in Douglas County last week.

So far, the health department hasn’t dug into the data deeply enough to figure out whether a weekly dip in mask-wearing correlates with increasing cases of coronavirus one or two weeks later, but Tri-County at least has the data to do that work at some point, said Brian Hlavacek, Tri-County’s environmental health director.

The public health department, one of the largest in the state, is among the few that is conducting mask surveys. Each week since April 26, volunteers have been out in their parked cars recording the data.

They do not go in the stores, and they don’t talk to people. They just count masks, Hlavacek said. Volunteers spend 30 minutes at each location, completing about five to 10 surveys in a day.

“It’s meant to be a quick and dirty assessment of what’s going on,” he said. “It’s not super sophisticated, but it helps in understanding the landscape.”

The percentages, which were slipping in June, have been above 90% the past two weeks — which coincides with Gov. Jared Polis’ July 16 statewide order requiring people to wear masks when indoors in public. Tri-County announced its own mask mandate about a week ahead of the governor.

Of the three counties, conservative-leaning Douglas County — where county commissioners were so opposed to the mask mandate that they directed the county attorney to figure out how to withdraw from Tri-County — is leading the way in mask-wearing compliance, according to the surveys. Since April, the lowest percentage of mask-wearing for Douglas County was 72% and it’s now at 96%.

Politicians and other public health departments throughout the state have been highly interested in the mask data, Hlavacek said.

The governor, during a news conference Tuesday, said mask-wearing was up since his mandate was announced, saying it jumped to about 90% from “the low 70s.”

“The way we lived in late June or early July was not sustainable,” Polis said, noting that coronavirus cases have now plateaued after a spike in late June. “Coloradans are taking this seriously and need to continue to take it seriously for the next few months to continue to lead our lives and grow our economy.”

A spokesperson for the governor on Thursday called the Tri-County survey results “encouraging” and said Polis is “thrilled to see this success.”

Boulder County Public Health did its first mask-wearing survey this month, not only counting the number of people wearing face coverings but also attempting to measure whether people and stores are following social distancing rules.

Mask-wearing dropped off dramatically at open spaces and parks, where surveyors found 26% of folks were covering their faces. Boulder County’s ordinance says people must wear a mask outdoors unless they are at least 6 feet apart.

The Boulder survey also assigned a social-distancing rating to each location, from 1-5 “where 1 is a completely crowded area with no social distancing and 5 is a well-spaced out area where no one comes within 6 feet of another person.” The countywide results ranged from 3.6 to 4.1.

The mask and social distancing surveys will continue each month during the pandemic, said Mike Stratton, spokesman for Boulder County Public Health. “We wanted to know, just like everybody else does, what is happening,” he said.

Gunnison County began its own face mask survey this week after tweaking Tri-County’s model for smaller population areas and doing a few days of pilot surveying. That initial surveillance found 83% to 93% compliance with county and Town of Crested Butte mask requirements.

Scads of townie bikes with masked riders roll down Elk where it has been squeezed down to one lane with yellow rope and railroad-tie flower boxes to make room for outdoor picnic tables. Bikers in leathers and face bandanas that look responsible, not menacing, lounge against historic storefronts. Tourists tethered to dogs stroll by, in masks that complement their outfits. Rainbow-colored Mountain Express buses glide down the street with masked faces peering from the windows.

But Gunnison County wants to know for certain just how much mask compliance there is. The county wants numbers that eventually might show how much of an effect mask wearing is having on virus rates in different parts of the county.

So, somewhere along Elk Avenue, in a parked vehicle, a Gunnison County worker or volunteer watches.

He, or she, tallies how many people leaving a busy spot, like the U.S. Post Office, are wearing masks. The counts recorded on a grid follow strict guidelines: if masks are slung under a nose, or hammocking a chin, they don’t count.

Crested Butte has mandated mask-wearing on Elk Avenue. Period. That takes the town a step beyond Gunnison County’s ordinance that requires masks in all places of business and outdoors when people are within 6 feet of each other.

On Wednesday, the most recent mask survey day, only a handful of faces on busy Elk Avenue were uncovered. If the maskless encounter a marshal, a town official, or a chamber of commerce member, they will be handed a mask. The stash of give-away masks is thanks to a donation from part-time Crested Butte resident and former U.S. Sen. Tim Wirth.

“I feel good about the level of community effort and connection and the leadership level throughout the county,” said Gunnison County’s Public Health Director Joni Reynolds, who has become a role model in the state for her tough, and sometimes controversial measures, to hold down outbreaks in her county.

Gunnison County, early on in the appearance of COVID-19, jumped to a top hotspot in the nation for levels of infections. The county instituted a severe lock down, asking second homeowners to stay away and posting lighted highway signs warning visitors the county was closed. Businesses were shut down.

Six people from the county died of COVID-19. Six of seven Crested Butte Town Council members came down with it. Nearly everyone now knows someone who has suffered lingering problems from it.

All of that may have helped residents to take the virus seriously and to cover their faces.

“Three months ago, there was resistance to masks,” said Crested Butte Mayor Jim “Deli” Schmidt. “But I’m pleased with the number of people wearing masks now.”

With the advent of tourist season, and an estimated 8,000 to 9,000 visitors rolling into Gunnison County each weekend, the area is again creeping to the top of the state’s infections. The county has had 262 positive cases of the virus. Recently,many of those cases are between the ages of 20 and 30. They have moved from being more prominent in Crested Butte to spiking more in the north end of the valley in the city of Gunnison.

If any of those factors were compromised, along with the rising numbers of cases, Reynolds is prepared to point the indicator on the county’s “coronameter” to yellow instead of blue, meaning new shutdowns would be put in place. The first thing to happen would be a shutdown of indoor restaurant dining. If the meter were to go to orange or red, Crested Butte and Gunnison would look like ghost towns again.

“I am cautiously optimistic at this point,” Reynolds said about remaining in the blue.

One factor in that optimism is the mask survey. If pretty much everyone in the county is complying, the belief is that the numbers of cases will be under control.

The data from the twice-a-week surveys done at multiple busy locations around Gunnison and Crested Butte will not be used for enforcement; rather they will pinpoint where masks are being worn — or aren’t — and that information will be used to educate the public, Reynolds stressed.

Reynolds said she expects that other rural counties that are joining together to share COVID-19 information and containment strategies will also do mask surveys.

Mask wearing is already being viewed by some around Crested Butte as an either-or choice.

In a guest commentary in the Crested Butte News last week, Rob Katz, the CEO of Vail Resorts, which now owns the Crested Butte Mountain Resort ski area, didn’t mince words. He wrote that if skiers want to see the lifts turning this winter, they need to put the masks on now.

“At Vail Resorts, we are strong advocates for face coverings and believe that in public gathering spaces – indoors and outdoors – everyone needs to wear a face covering at all times,” Katz wrote.

There have been plenty of irate emails to the Gunnison County health department opposing mask wearing. There have been sidewalk arguments and let-your-guard-down slip ups in at least one local bar.

But, if Elk Avenue is any indication, the majority of Gunnison County – at least on the Crested Butte end – is taking that stern message to heart.

And, if symbolism carries any weight, the well-known dragon and knight sculptures at the entrance to town have been fitted with masks. So has Smoky Bear on the fire-danger sign. So have statues in private yards around town.

“We do have a lot of support here,” Schmidt said. “We can see that.”