Archery has deeper meaning at this Colorado Springs range 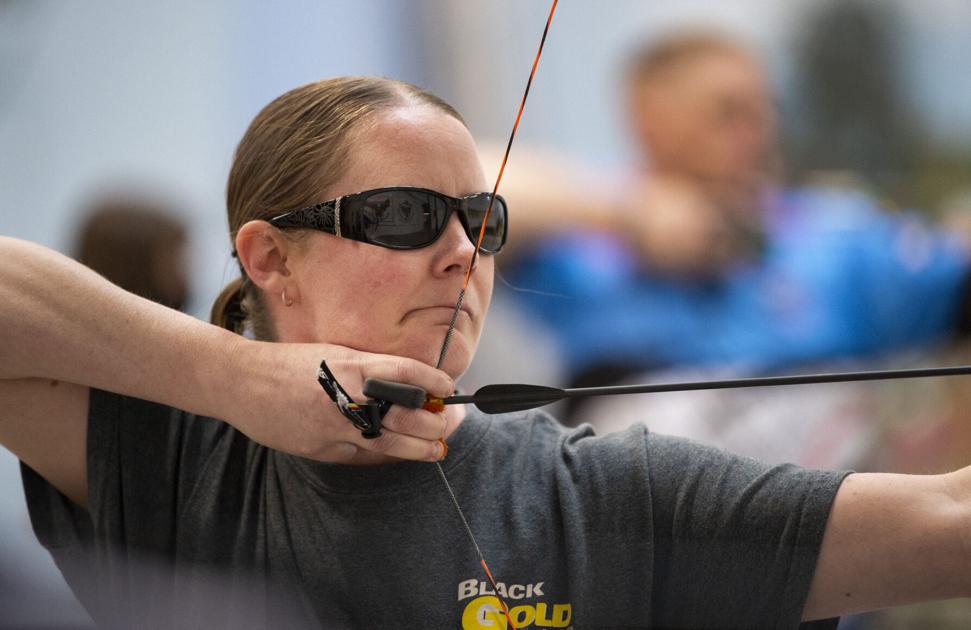 Archery has deeper meaning at the Archery School of the Rockies in Colorado Springs. The range offers open range 3D and target shooting and classes for anyone that wants to shoot a bow, from Olympic-bound athletes to veterans to people with disabilities. (Video by Skyler Ballard)

She always dreaded going to gym class. She dreaded it for the threat of games like basketball.

The ball came her way for a decisive shot. Because she was born legally blind, she couldn’t see it coming.

“So it hits the ground, and we lost,” Lopez says. “And my team wasn’t very nice.”

Suffice to say, she never liked sports. “I hated sports,” she says.

Until in her adulthood, when she found archery.

She found Archery School of the Rockies in Colorado Springs. She found a coach who cared about her blindness to offer accommodations and didn’t care to hear excuses afterward. Lopez found others here with disabilities. Others without limbs, others who used wheelchairs, others with conditions that required other accommodations.

Regardless, they were all shooting for bull’s-eyes.

At Archery School of the Rockies, Lopez found an inclusive oasis.

“One big family,” says her husband, Eric, who is deaf.

After each shot, Eric will say three o’clock or six o’clock or 10 o’clock or whatever indicator that lets Ashlette know of the arrow’s landing spot. She’ll know what slight adjustment to make from there.

The best part about it, she says: “When you’re on the line, you don’t think about anything else.”

At Archery School of the Rockies, no one is thinking about life outside, the harsh realities in a society that isn’t always warm and welcoming.

“There’s so many things that they’re eliminated from because they either physically or mentally aren’t given the assistance needed,” says Billie Allor, a provider for people with disabilities. “That sense of accomplishment and sense of being accepted is huge. This is a place they can come and feel equal to everybody else, and that is huge.”

This is a place she brings Joe Bishop. Beside his wheelchair, she lends some muscle for the drawback. The arrangement is helped by a mount.

“We met Karin,” Allor says, “and two weeks later she had this mount built.”

That’s Karin Bock, who envisioned Archery School of the Rockies seven years ago, inspired by her granddaughter.

“One day I took her to a lesson and listened to her coach say, ‘Oh, the Olympics is a really good dream, but you shouldn’t think about that,’” Bock recalls. “To which I said, There’s something wrong here. You don’t squelch dreams. You encourage them.”

That’s what she would do with the range she had in mind. She would dive into archery books, travel to seminars and pick the brains of top coaches. Archery was new for Bock, but mentoring was not. She had previously taught sports ranging from cheerleading to football.

For Bock, sports represented a platform for life. “I just love being able to see people achieve their goals and do things they didn’t think they could do,” she says.

The archery concept went from a dingy basement to this nearly 20,000-square-foot complex, where one walks in to pictures and jerseys on the wall celebrating Paralympic and national team archers who have come through.

The all-volunteer coaching staff includes Cindy Poorman, who shot for the national team in the 1980s.

“Traveled all over the U.S.,” she says. “There’s nothing like this out there.”

Nothing quite of this size and scope, she says. Young and old take their places, families and military veterans, individuals dreaming of their next big buck or, yes, the biggest stage in the sport.

In the middle of his Army career and early into fatherhood, Kyle Eldridge told Bock he wanted to make the Olympics. “She said, ‘OK then. If you’re willing to put in the time, I’m willing to support you.’”

Time, attention to detail, written goals and a never-quit attitude. That’s some of what’s required by Bock, who is of few words, true to the no-nonsense approach she expects of big dreamers. For empowerment, she likes them pursuing certification as coaches. Eldridge is one of those.

Since he stated his Olympic intentions, he has had a brain tumor removed, leaving him with frequent fatigue on the range, and a surgery that left his arm temporarily impaired. He shot with the other and used his teeth to draw back the bow. Now, he’s regaining strength in the arm and combating soreness.

He’s not giving up.

And that’s the kind of pupil Bock wants. She gravitates to the adaptive side of the sport, because breakthroughs are somehow sweeter with those perceived barriers.

She considers something personal about her pursuit. She’s quiet for a while.

“I didn’t grow up in an environment that was conducive … I was not encouraged. I was forever the failure.”

She doesn’t dwell on the past. Better to focus on the here and now, the process of improvement.

Lopez is another fiercely committed to this, no matter her blindness.

She’s a busy foster mom of eight, all while competing internationally against some of the best archers out there — visually impaired or not. She likes it when they’re not.

“Because I don’t want to limit myself,” she says. “Because I want my kids to see you can meet any of these challenges.”