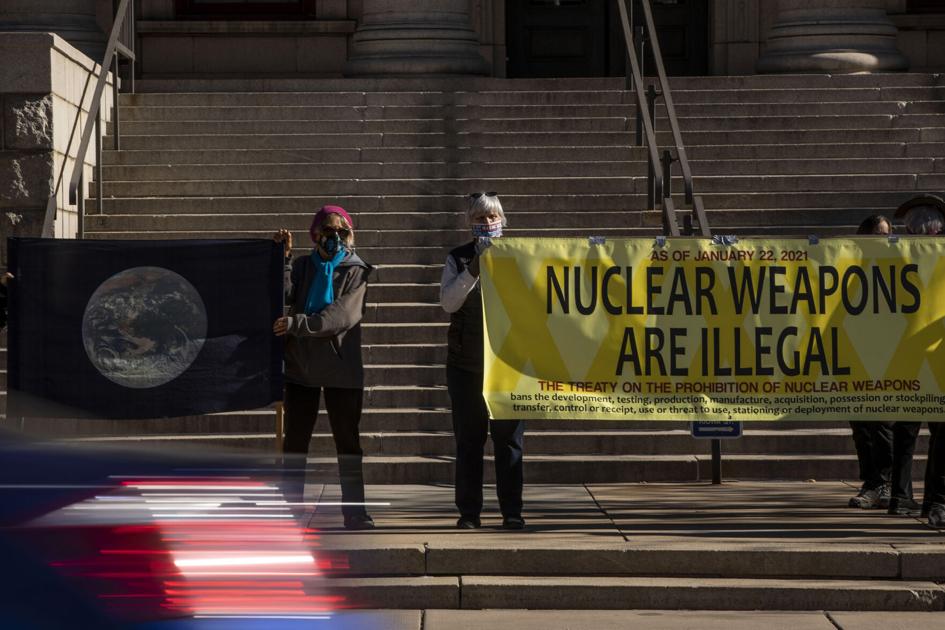 A United Nations treaty abolishing nuclear weapons took effect Friday, though none of the nine countries with nuclear war capability, including the United States, signed it.

But support from leaders of 51 other nations that ratified The Treaty on the Prohibition of Nuclear Weapons means nuclear weapons are now banned under international law.

“Ding, dong, the nukes are dead,” was the theme from demonstrators at Colorado Springs City Hall Friday.

Susan Gordon holds a banner outside of City Hall in Colorado Springs on Friday, Jan. 22, 2021. Around a dozen people gathered at City Hall in protest calling for the U.S. to honor the new United Nations Treaty on the Prohibition of Nuclear Weapons, which went into effect internationally on Friday. Protests were held across the nation voicing to the Biden administration for nuclear arms reduction. (Chancey Bush/ The Gazette)

“It’s the end of the efforts of the last 75 years to stop nuclear weapons — with the coalition winning the Nobel Peace Prize in 2017 for writing the treaty — and it’s the beginning of a new movement to abolish them,” she said. “This is a big step.”

Most Americans likely have never heard of the treaty, Sprunger-Froese acknowledges.

Two activist nuns in 2017 delivered a copy of the treaty to Peterson and Schriever Air Force bases in Colorado Springs.

Peterson Air Force Base did not respond to requests for comments Friday on the treaty.

Activists hope bringing awareness to the new international law will put pressure on the powerhouse countries that have a finger on the button.

Between 77% and 89% of residents in five NATO nations (Spain, Italy, Iceland, the Netherlands and Denmark) support the treaty, according to a survey from the organization.

But are the conditions of the treaty — which makes illegal the development, production, testing, manufacturing, possession, stockpiling and use of nuclear arms — realistic?

“There’s never any guarantee for social change, but I’m hopeful,” Sprunger-Froese said. “As people are more in tune with the climate crisis, I think they’ll see this is similar, but leads to extinction by nuclear weapons, instead of extinction by pollution.”

With El Paso County being the home of five military installations, and Colorado having 41 nuclear missile silos aimed and ready to launch, “we need to deal with that reality and not be in denial,” Sprunger-Froese said.

“Countries are saying please stop. We need to listen and adjudicate.”

Friday’s demonstration was one of many events held across the country, including at the Capitol in Denver and University of Colorado in Boulder.

Groups are calling for the new Biden administration to honor what they see as a worldwide desire for nuclear arms reduction and elimination.

President Joe Biden proposed on Thursday to extend by another five years a nuclear arms control treaty with Russia, which is set to expire Feb. 5.

The Kremlin said on Friday that Russian President Vladimir Putin would be open to that, but any agreement would depend on the details of the proposal.

Russia and the U.S. jointly possess more than 90% of global nuclear weapons, the Institute’s report says.

“The bigger problem is the worship of violence,” said Peter Sprunger-Froese, one of about a dozen demonstrators at City Hall. “When we meet evil with evil and violence with violence, we never know when we have enough violence. We keep competing with nuclear weapons.”

The number of nuclear warheads decreased by 465 in 2020 over 2019, according to the Stockholm report. Despite the decrease, which was attributed to the U.S. and Russia dismantling retired weapons, “all nuclear weapon-possessing nations continue to modernize their nuclear arsenals,” the report states.

Russia owns the most nuclear weapons at 4,310. While the United States has 3,800 weapons of mass destruction, it has more deployed than Russia: 1,750 for the U.S. vs. 1,572 for Russia. That’s because the U.S. has nuclear weapons positioned in allied countries, such as Germany.

Both the U.S. and Russia remain below the limits specified under the current treaty, the Stockholm report noted.

It’s time to push the issue and demand the superpower countries “stop bullying all the other countries and agree to come to the table and accept this ban,” said local demonstrator Susan Gordon.

She would like to see a moratorium such as what was issued during the South Korean Olympic Games.

“Dwight Eisenhower said it all in his ‘Cross of Iron’ speech (in 1953): we’re wasting our resources,” Noonan said.

Eisenhower likened arms spending to “stealing from the people.”

“My hope is we start to redirect our resources in a positive direction,” Noonan said.