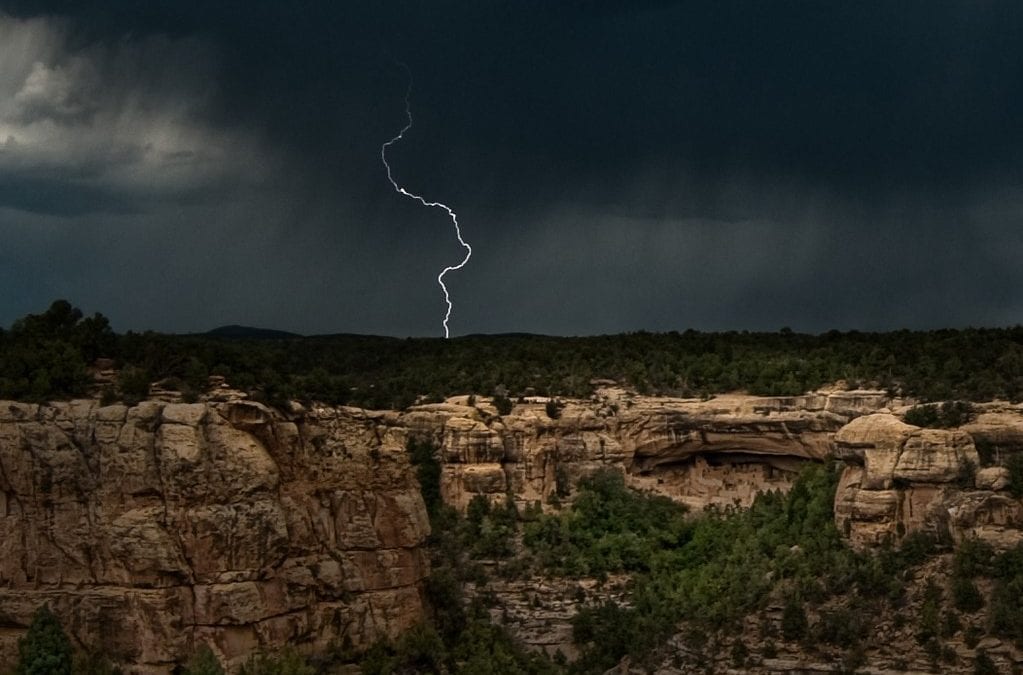 Mesa Verde National Park is home to several ancient sandstone structures which once served as the dwellings of an ancient 13th to 14th-century civilisation. These people were known as the ‘Anasazi’ which was a Navajo term that roughly translates to ‘ancient enemy’. These rectangular structures span in height and size and some are placed precariously by cliffs accompanied by similar circular structures called Kivas which were used for religious purposes.

These desiccated ruins can be spotted easily from their signature frameless windows and dull sandstone color, but most are uniform in shape. Mesa Verde roughly means green tablelands and, while it is mostly unknown as to who first built and settled in these structures, they were mainly known to be inhabited by the Pueblo people. There are two formations of religious Kivas which are from distinct from each other, marking two different periods of architecture.

The Cliff Palace is a notable structure within the park, consisting of 23 Kivas arranged in an elaborate maze. These structures range from colors of pink, yellow and red sandstone which shows quite an astounding sight. It is said that these ruins were only inhabited for a century before the Pueblo people migrated North, leaving their towered structures behind and developing their architectural skills further.

The National Park was then established in 1906 in order to preserve the archaeological heritage of the Pueblo people. It is said that the park is home to the most number of preserved archaeological sites in the US, including over 600 cliff dwellings. The overall view of the entire park shows ranges of cliff-side sandstone structures and dwellings that prove to be fantastic sights to behold. Guided tours around the dwellings used to be available all-year-round which require on-site bookings to ensure you have an appropriate time slot to explore the dwellings with your guide.

At this current situation, the cliff dwellings are unavailable for visits, however, there are various sightseeing points where visitors will be able to get a good and clear view of the dwellings for an amazing panoramic view of the sandstone structures. Besides that, the Mesa Verde National Park also has several hiking trails available for visitors that give you a good view of the park. For those who prefer to drive, there are also a few scenic driving routes that allow you to take in the sights and drive through some ancient heritage spots. To further appreciate the generations of history of the Pueblo people, there is also a museum with dedicated artefacts and information for visitors to learn more about the mysterious ruins.

There is now an online virtual ranger station available for prospective visitors to get a better look and feel of the overall park experience to ensure you plan your visit way ahead. This includes buying visiting passes online, downloadable visitor guides and more to further complete your experience when you get to the Mesa Verde National Park. If you can’t go there in person, you can even get a virtual tour of the park and see the magnificent structures yourself in an immersive online tour.