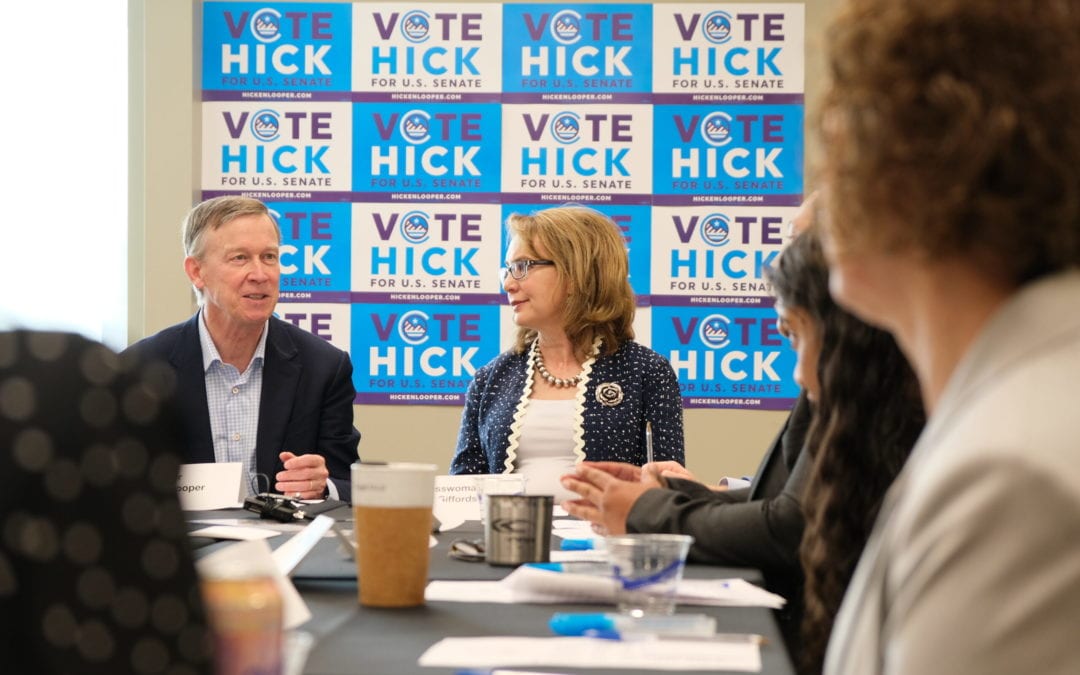 An Open Letter to Colorado Voters

Former Congresswoman Gabby Giffords makes the case for sending Gov. John Hickenlooper to the US Senate.

I am writing you today with a personal testimonial and an urgent request.

On July 20, 2012, a gunman took the lives of 12 people and injured dozens more at a movie theater in Aurora. The state and the nation were stunned by yet another horrific gun massacre. It had been a year and a half since I was shot, and my recovery was—and continues to be—something I work hard for every day.

In the nation’s moment of shock and sadness, I witnessed firsthand the leadership of Governor John Hickenlooper. He consoled the community, and then he took swift action. He took on the National Rifle Association—and he won.

Gov. Hickenlooper signed three strong gun safety bills into law, including a universal background check requirement and magazine limits. Gov. Hickenlooper reminded us we are not powerless in the face of tragedy, that gun violence is not inevitable, that there are solutions that can save lives if we have the courage to act. There is no doubt that the laws shepherded by Gov. Hickenlooper have saved many lives.

The stakes in this Senate race could not be higher. You have a choice between Gov. Hickenlooper, who will be a fierce advocate for commonsense gun laws, and Senator Cory Gardner, who has received “A” ratings and nearly $4 million in campaign funding from the NRA. In return, Sen. Gardner tried to block legislation that would improve the background check system, a modest proposal that garnered overwhelming bipartisan support.

Gov. Hickenlooper knows we can protect the Second Amendment while also protecting communities with gun laws. He supports funding for community-based violence intervention programs, stronger prosecution of gun traffickers, and extreme risk order protection laws that temporarily remove firearm access from individuals in crisis. I’m a gun owner myself, and alongside Gun Owners for Safety in Colorado, and nationwide, we support these sensible solutions.

This January will mark 10 years since the day I was shot. In the difficult days that followed, hope fueled my survival and recovery. With grit and determination, I learned how to walk and talk again. Now, ahead of the most consequential election of our lives, I remain hopeful. I’m proudly using my voice to recognize inspiring public servants like Gov. Hickenlooper who are challenging incumbents enabling the reckless and dangerous behavior of President Trump.

Coloradans understand the gravity of the threat of gun violence—too many of you have lived through its horrors. Yet Sen. Gardner has demonstrated time and time again that he doesn’t take your concerns seriously. By amplifying the many Coloradans demanding gun safety, we can ensure these voices aren’t drowned out by the greed and cowardice of politicians like Sen. Gardner who are supposed to represent them.

Coloradans deserve better. You deserve a senator who speaks for you—not for Trump, McConnell, and the NRA. We know that Gov. Hickenlooper will be such a leader, because he’s led on this issue before. By sending Gov. John Hickenlooper to the Senate, you will be sending the message loud and clear: our lives are worth more than gun industry profits.

Americans are demanding leaders who fight for us, not the gun lobby. Across the country, courageous leaders are running on gun safety platforms—and winning. We can’t let up now—we need to make our voices heard far and wide.